Once the anniversary figures were released in 2007, the JvC era of G.I. Joe came to an end.  I define this period (generally) as 2002 through 2006 and it's also described as the "New Sculpt" era.  But, truth be told, the figures that Hasbro produced in 2006 were far cries from those who debuted in 2002.  The abandoned o-ring returned quickly.  But, the general figure proportions got better and the figures slimmed down.  Really, a 2002 figure is as far from a 2006 figure as a 2006 figure is from an anniversary figure that debuted in 2007.  The JvC line is full of good work, though.  It had innovative character designs, gear that could interact with the figure and a solid line up of classic characters and new recruits.  It's been a long time since I've looked at a figure from that era.  But, this Joseph Colton shows the evolution of that time that ultimately lead to the anniversary sculpt figures we still see today.

One of the things that the JvC era did well was they went easy on the vintage homages and reinterpreted characters in new ways.  In some instances, the figures were duds.  But, in others, the new takes were fun and interesting.  (I'm looking at you, Disco Destro!)  This take on Joseph Colton firmly falls into the latter category.  This isn't the Joe Colton we know.  But, it's not a radical departure for the character.  It's a fun toy, which is something that hearkens back to Joe's roots and was abandoned in the movie era.  Of course, being released in the DTC series, few kids actually had a chance to find him...until Hasbro dumped their unsold overstock on Toys R Us.  But, Hasbro at least tried.  I've long maintained that had Hasbro given the same level of thought to their vintage repaints of the 2000's as they did the JvC line, the vintage line would have continued at retail: long after the JvC stuff died out.

When the JvC era debuted, I was a willing and enthusiastic participant.  It was nice to get Joes at retail, again.  But, I was also blind in my support for anything Joe: naively thinking that support would lead to better things.  I religiously bought everything through 2003.  But, as 2004 dawned, I found my interest in the new sculpts diminishing.  I found that I rarely used them and always took out my vintage style Joes for photos.  As the 2004 continued, it became harder and harder to be a completist of the line.  Tons of retailer exclusives started popping up: often reissuing many existing figures along with one or two new figures.  I discovered that the effort of collecting the line wasn't worth the joy it brought to me.  So, I stopped collecting JvC.  And, with that, I lost any interest in a Joe figure that wasn't vintage style.  (You'll note that I profiled JvC figures throughout 2003.  But, in 2004, my new release focus shifted almost entirely to ARAH style releases.)

Over the years, I sold or traded off my entire collection.  This proved fortuitous as it allowed me to partake in the first batches of factory custom figures which are now much more expensive and hard to find than anything from the JvC era.  And, I've never regretted it.  That's the piece that's so odd to me.  I've long regretted selling or trading off vintage pieces.  But, I don't miss the JvC stuff at all.  I haven't had any in a decade, now, and I don't even have nostalgia for the era.  I fondly remember finding Vipers and Mirages on the shelves.  But, aside from the purple 2002 Snake Eyes, all of the JvC era stuff just flows together: even with that era and my purchases logged in the archives of this blog.

What is odd to me, though, is that we haven't seen the resurgence of collectors who were kids who grew up with the JvC era figures.  Collectors talk about the anniversary era being the heyday of modern Joe.  But, the best anniversary years sold about 2/3 the figures of the lower ends of the JvC era.  And a few JvC era waves saw production numbers that exceeded even the waning years of the vintage line.  These weren't all bought by collectors.  There were, maybe, 5,000 active Joe collectors of that era.  So, hundreds of thousands of Joe figures were bought and played with by kids.  Kids who would now be in their mid to late 20's...the prime years for them to be asserting themselves as the next generation of Joe collectors.  Sure, there a couple of them out there.  But, by and large, these kids didn't become collectors.  The second coming of the ARAH mythos was cool and sold toys.  But, it failed to penetrate the pop culture psyche of the kids to whom it was targeted.

This Colton is pretty basic.  The green and black camo pattern is nice and the maroon beret joins the silver highlights in offsetting the base colors, nicely.  But, he's so basic that, were I not familiar with him, I wouldn't recognize him as a G.I. Joe figure.  In fact, that's likely why he was lying at the bottom of a figure bin at a local comic shop where I found him.  One of the main features I loved about the JvC era was the working holsters and Colton's are perfect.  Aside from that, though, there's little to discuss about the figure.  But, that's OK.  The JvC era was dominated by intricate, well designed figures.  So, getting a few basic guys like this Colton gave the line a visual diversity that was reminiscent of the vintage line.

The Viper Lockdown is an interesting beast.  Upon its release, the set was well received.  Collectors always loved new Vipers.  And, getting an Interrogator and a G.I. Jane in the set were collector bonuses right as the line was dying.  Joseph Colton, though, was probably the least well received figure in the set.  In recent years, members of the set have gotten pricey.  But, the JvC era figures, in general, haven't seen the huge price surges that both vintage and anniversary figures have seen in the last 2 years.  While the Jane figure will fetch $20, Colton won't get 1/3 of that amount.  You can still buy carded sets for around $50.  So, if you want the whole set, that's the way to go. 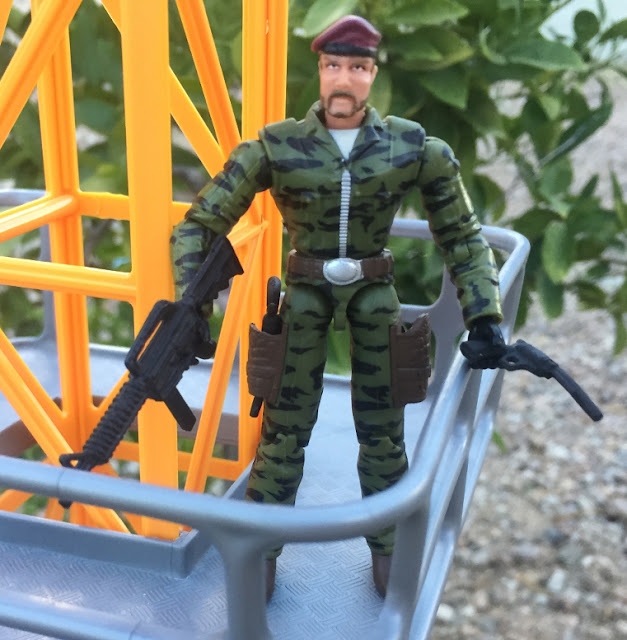 Posted by Robot_Sonic at 1:17 AM
Email ThisBlogThis!Share to TwitterShare to FacebookShare to Pinterest
Labels: 2006, Joseph Colton, JvC, Retailer Exclusive