To say that the VAMP is one of the most popular G.I. Joe vehicle molds is an understatement.  Aside from the elite status it still enjoys in the collecting world today, the VAMP was also a staple of Hasbro's worldwide export of the Joe property.  Flavors of the VAMP appeared just about everywhere G.I. Joe toys were manufactured and sold.  Heck, new variants of the base mold were still appearing in India in 2018!  VAMP collectors have dozens of body changes, updated colors and international packaging variants to chase down.  Some will cost thousands of dollars.  Others are more affordable.  One of Hasbro's first forays into international VAMPs was the Panther Jeep that was released in the European Action Force line.  This black and yellow repaint meant for the SAS subset remains one of the most distinctive VAMP repaints and still goes surprisingly well with a host of recently released Joe toys.

Joe collectors love their stickers.  As a young child, I did, too.  But, as I got older, I hated the stickers.  And, the vehicles I acquired after 1984 rarely have more than 50% of their stickers applied.  By, 1987, I may not have put on any at all other than the those for internal controls.  Mine dislike for stickers was a combination of not wanting affiliations all over my vehicles.  (Why would an elite, covert unit announce their presence by plastering their name all over their vehicles that anyone with a pair of binoculars could see miles away?!?)  But, it was also that I felt most of the stickers didn't add anything to the look of the toy.  In the Action Force line, though, the vehicles feature arrays of unique stickers that were more akin to the type of thing that would have survived my childhood scrutiny.  The Panther's stickers are a great example.  While there's a great deal of detail added to the vehicle by the stickers, the best one to me is the additional controls behind the passenger.  It makes the vehicle seem more than a simple combat jeep.

For me, this helps distinguish the Panther.  I see it as a more advance scouting vehicle that is less utility and more specialty.  The fact that the vehicle is a nice match for recent factory custom figures, though, is a nice bonus.  While there are SAS inspired Cobra Troopers, they are of less interest to me.  Instead, I see the Panther as a nice match for any of the multitude of new Joe inspired characters.  These feature many blacks and greens that work well with the black and yellow.  Plus, later figures are a tight fit in the VAMP.  Earlier molds both fit better with the size of the cab seats but also the aesthetic of the vehicle.

One of the things missing from the factory custom makers is vehicles.  It makes sense since multiple repaints are hard and some vehicles have assembly points that would be difficult to scale at a price point collectors would be comfortable with.  As the Action Force vehicles are relatively new to me, though, they help fill this void.  The vehicles are compatible with the figures and provide an alternative look for classic Joes...just like the factory custom figures do.  I'm at a point now where I see classic Joes as almost out of place among vehicles like the Panther.  It's just a personal association that's born of when these items began to enter my collection.  But, it helps give these alternative paint jobs a home that is important to me and continues to grow.

The Panther has a couple of variants.  The most notable difference is that the roll bar can be either yellow or black.  There are also very hard to find versions that have the SAS logo painted on instead of being a sticker that could be applied.  The roll bar variants don't seem to be nearly as difficult to find.  The Panther was available in both a window box and a picture box.  And, there are release country variants of the packaging, too.  One other important difference on the Panther from the VAMP is the wheels.  The Action Force tires are not the hard plastic found on the Hasbro release.  They are more rubbery and soft.  It's a tiny little detail that adds a tremendous amount of additional value to the vehicle.  The wheels feel more realistic and are more substantial.

The Panther is from the SAS series of Action Force toys.  The base black color scheme is one that collectors enjoy.  But, the yellow highlights make the toys more problematic.  The Panther was more ostentatious than the Wolverine repaint.  (Which is why the SAS Wolverine commands a premium today.)  But, it was in line with the FANG re-release.  The SAS figures, tend to be loved.  Both Blades and Hunter have become extremely valuable figures that collectors adore.  But, Stalker, the figure included with the Panther, has not.  The fact that he's a vintage Snake Eyes repaint hasn't helped him, either.  These days, it would be cheaper to buy a Stalker and remove all his paint than it is to buy a standard 1983 Snake Eyes.  That doesn't make sense.  But, it speaks to the overall availability of the Panther and its driver.

Depending upon the variant colors and inclusion of the figure or not, Panther jeeps are still affordable.  Mint and complete versions can be purchased for around $50...sometimes still including the figure.  Most of these deals are from European sellers.  So, shipping will significantly add to the overall cost.  But, for an Action Force exclusive repaint of a super popular mold that is done in collector approved colors, that's a pittance.  You'd have paid more for a complete Panther 20 years ago than you do today.  That's an extreme rarity.  But, the original popularity of the toy coupled with large volumes of overstock that found its way to the modern collecting world leave collectors with a cool repaint that is still priced at a level where most collectors can afford to buy one.  Items that fit that description are getting harder and harder to find. 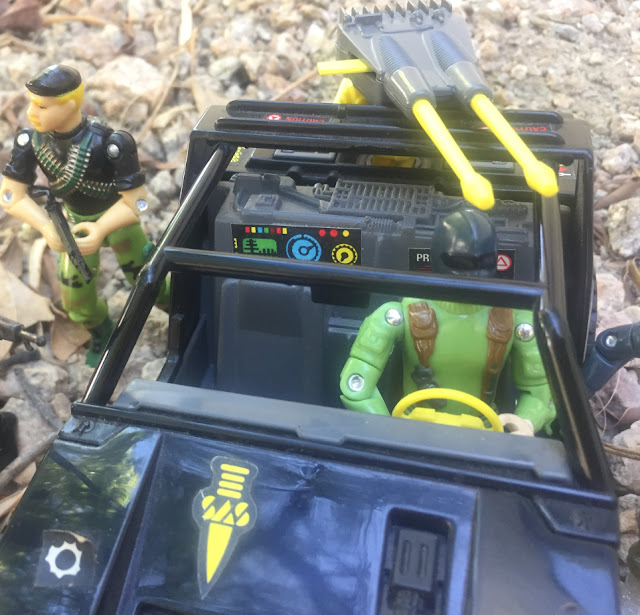 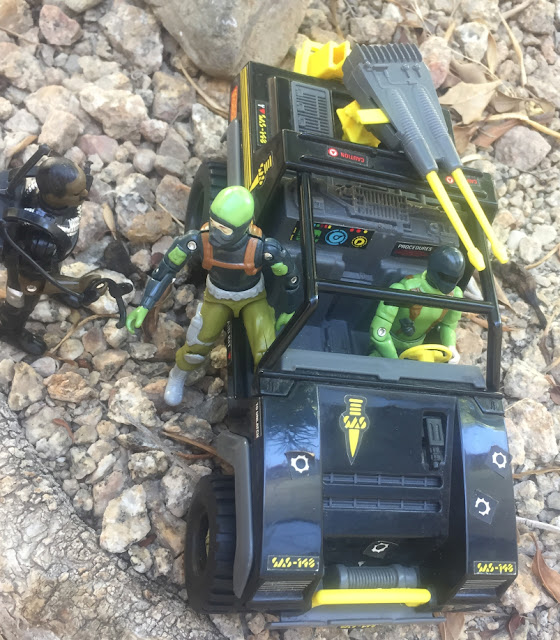 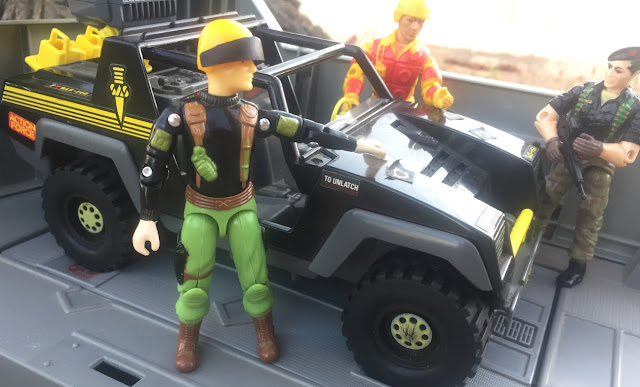 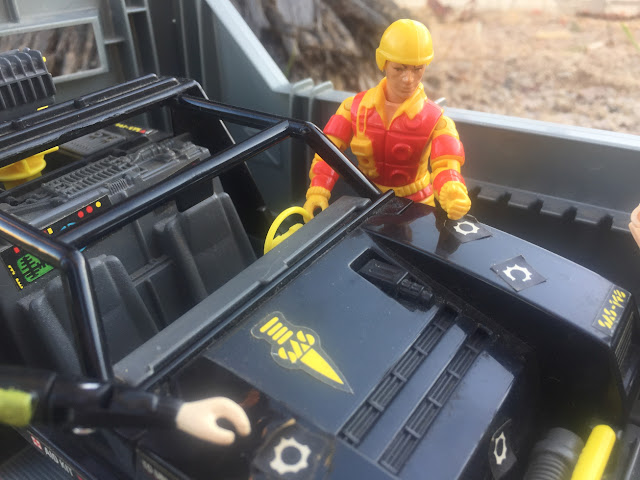 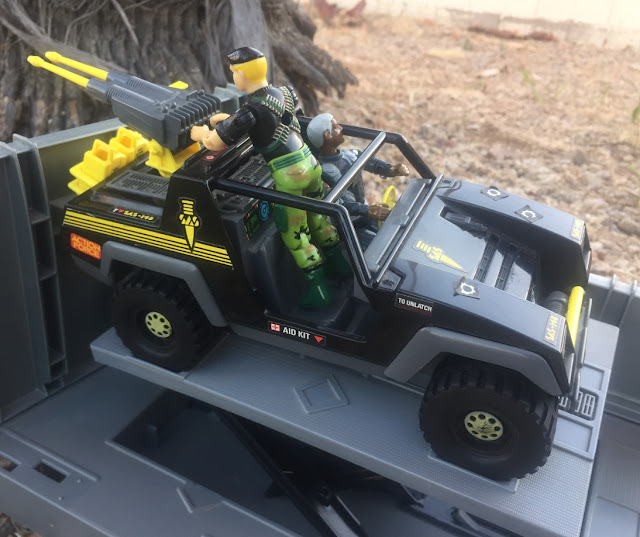 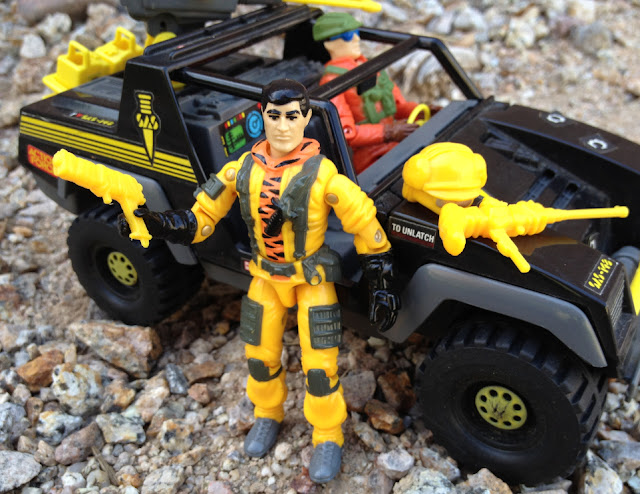