2009 Agent Helix - by Past Nastification

With the 2009 release of The Rise of Cobra, Hasbro pumped out many, many figures.

I’m just assuming that most of you didn’t like the movie.  If you did, that’s okay.  It just makes it easier for you to embrace its toy line, I’d assume.  The ROC toy line stayed with the 25th Anniversary/Modern Era format, but felt like a unique subset within the GI Joe brand.  But for me, at least, I try to look at the ROC figures as their own things and just ignore the movie that spawned them.

Many of figures were inherently good, like most of the Baroness figures, which visually lined up other existing versions of the character.

Some were them were good if you could imagine they existed outside of the movie’s continuity, like The Doctor as being a not-Cobra Commander character.

Then there were figures dropped into the ROC toy line whose characters weren’t even in the movie, but didn’t exist anywhere previously. Agent Helix is one of these figures/characters.

Agent Helix has a look that reads “techno saboteur” more than soldier.  Given that the title “Agent” is part of the character’s name, this is obviously what Hasbro was aiming for.

The sculptor(s) did some top notch work on the figure.  The head features an attractive if slightly long face with a neutral expression.  The hair is a separate piece in what’s probably best described as a “Rachel from Friends” layered haircut.  It’s further accentuated by a two-tone color scheme, obviously mimicking the unnatural color-streaking fad of a decade ago.  The face and the hair are nicely done and infuse the figure with a lot of its charm.

The uniform is not quite a bodysuit, but very tight shirt/pants over a lanky frame. It features a harness/body armor system that manages to provide protection to the abdomen, but leaves the upper torso completely exposed, which looks interesting at first but becomes ridiculous when you realize it’s very bondage-like.

“But the Baroness-”  Stop.  Don’t say it, because I am aware of the Baroness’ outfit.  But its armor plating appears to cover the entire torso, and even pops up on other parts of the body.  Agent Helix just wears a bulletproof girdle.   And besides, I’m always okay with Cobra designs being a bit sillier than Joe ones.

Bondage harness aside, this is a good design.  The mustard yellow on the upper portion of the shirt gives a color pop against the otherwise dark and cold colors of uniform.  The silver of the pouches (or whatever they are) adds another slice of visual interest.  It looks clean in an antiseptic way that doesn’t contrast with the other colors, and even works with them.

There are plenty of great details on the figure.  The overall sculpting is top notch, as it was on most of the ROC figures.  There’s a techno-kibble device on the figure’s right upper arm.  The floating utility belt allows for the pouches to dangle over the hips.  The compression-style kneepads are perfect.  The sleeves are three-quarters length, like some sports jerseys.  The long boots have side pouches.  These are all little details that show that someone put effort into making this figure.

Agent Helix’s gear is plentiful, though largely unnecessary.   The futuristic rifle and two sidearms would have been enough, but the figure also has the obligatory oversized missile launcher (that looks like at best like a Nerf toy and not a representation of anything close to real world), and even a machete.  Everything is nicely colored, which is better than neon green or safety orange, so there’s that.  And any accessories you don’t want to display with the figure can go into a baggie, tray, or parts bin.   Or even a trashcan if you’re like that.

Had this character been introduced into the GI Joe mythos by ARAH format when I was a kid, I’m sure it would have been a welcomed addition.

Time for a side rant.

Even 37 years since 1:18 scale GI Joe began, there are only about 30 different female characters that have one or multiple figures, and that’s including exclusive GI Joe Collectors’ Club figures.  This number is based on characters, not total figures.  So although there may are many multiple versions of Scarlett, the Baroness, and Lady Jaye in different formats, that still only adds up to 3 characters.  My point is that we’ve gotten less than one new female character per year on average.  Collectors even appreciate head-to-toe repaints representing new characters, like ARAH Jinx as Vypra or later as the swordsmith Araskikage sisters (also stupidly named Vypra), or ARAH Baroness as Chameleon.

Thanks, I feel better.

A totally new figure/character, especially one done so well, is greatly valued.  Agent Helix might be the most important character to come out of the ROC toy line.  Just don’t think about the bulletproof girdle. 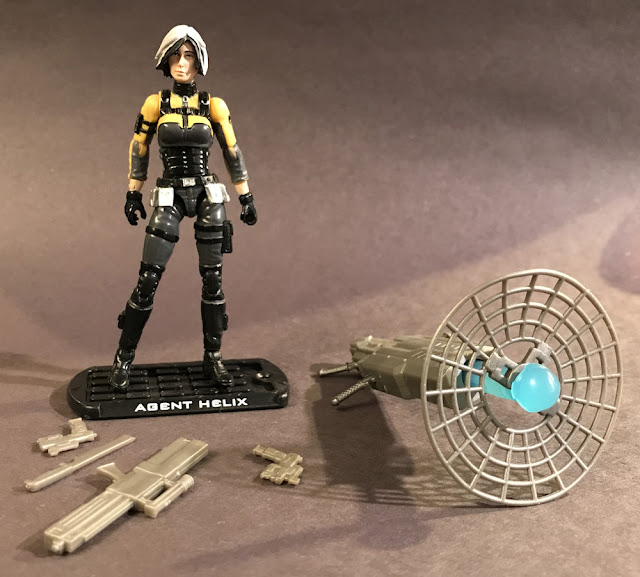 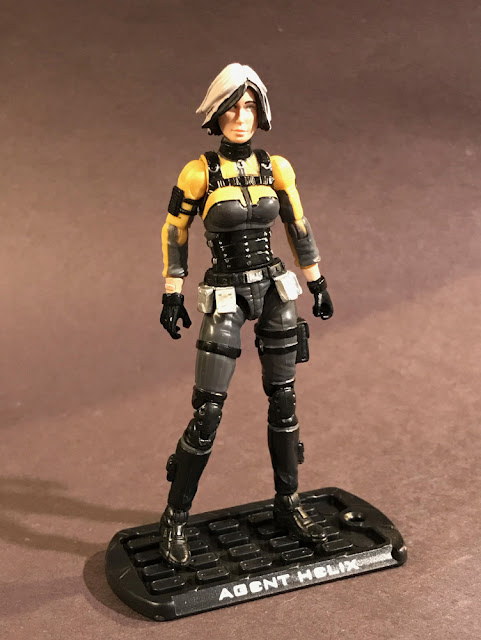 Posted by Robot_Sonic at 2:00 AM
Email ThisBlogThis!Share to TwitterShare to FacebookShare to Pinterest
Labels: 2009, 25th Anniversary, Agent Helix, Past Nastification