One of the earliest figures I looked at on this site was the 1993 Payload figure.  That release was one of my first collecting purchases in the mid 1990's and held a special place in my collection at the time.  The mold was good.  The colors were strong.  And, the figure just, generally, felt in tune with the figures from the '80's that had been part of my childhood.  As figure resources came online in the subsequent years, I learned that the 1993 Payload was actually a repaint of a 1992 release.  The original use of the mold was an update of a character I had loved as a kid.  He featured colors that worked for his specialty and also worked very well with the new sculpting.  On top of all that, he was a Eco Warrior: a subset I really enjoyed.  Despite all that, it's taken more than 20 years for the 1992 Eco Warriors Barbecue figure to show up as a profile subject.

As a kid, Barbecue filled a very specific purpose.  While the Joe team, generally, needed a firefighter around, I found the figure's best use was a required crew member on the Whale.  While Cutter and Shipwreck would, usually, man the cockpit, Barbecue would be seated behind them.  Here, he was would await a call when he might have to put out a fire that threatened the missile launchers, main controls, bridge or depth charges.  Barbecue's heroics saved the Whale more than a few times.  Though, there were situations where other firefighters (in more on off stories) would die after failing to control the fires that broke out.  Or, the firefighter would be killed by a skilled Moray gunner and then the Whale would explode after a fire got to the depth charges.

Paint wise, this Barbecue is pretty basic.  The body is red, yellow and black.  That's it.  For a vintage figure, that's pretty basic.  Not even the pistol molded onto his right leg is painted black.  It's the same yellow as his holster.  In some ways, Barbecue seems like a figure where Hasbro cut some costs.  The basic three colors, though, really work.  There's enough color that Barbecue doesn't feel skimpy.  (Especially when compared to the 3 color figures that would debut in the 2000's.)  The less is more approach works for Barbecue.  The bright colors work, too.  Red and yellow are a natural fit for a firefighter.  And, while the 1985 release was a bit more muted, he was also bright for the time.

Barbecue's accessories are not great.  He carries over the squirting water gimmick from the 1991 Eco Warriors series.  This time, though, the pack is red and yellow with an bright yellow launcher.  For a firefighter, this gear can actually work and I find it more acceptable for Barbecue than I do any other figure which whom it is also included.  But, there's a cool little hack for giving this figure better gear.  The once ubiquitous Funskool Barbecue figure includes classic 1985 gear but in colors that exactly match this 1992 Eco Warrior figure.  So, you can slap a spare set of the famous firefighting gear on this 1992 figure for a much improved look.  In the days when Funskool Barbecues were $4, this was easier to do.  But, carded Funskool Barbecues remain available in the $20 range today and this additional use of the gear helps to justify that price.  I posted my first photo of this figure wearing the Funskool gear back in May of 2002.  17 years later, it's still my preferred way to use the 1992 Barbecue figure.

It was rare for G.I. Joe figures to feature accessories on the card artwork that didn't make their way into the actual figure release.  Mainframe's computer stand is probably the most famous.  Barbecue, though, is shown on his card artwork using a zip line.  I'm not aware of any real evidence that suggests that Barbecue was originally intended to include the rope and a zip handle.  But, he is the only Eco Warrior Joe who does not include any gear other than the water squirting pack.  (Toxo Zombie also got the shaft in 1992 and only included the water cannon with no other gear.)  I'm not sure of any reason why Barbecue would have gotten the rope.  But, I was a sucker for ropes as a kid and would have liked this figure to include a zip line accessory set just because I'd have found it fun.

Eco Warriors have a fun/irritating gimmick.  They change color when differently temperatured water is sprayed on them.  The color change was meant to denote "battle damage".  For a young kid in 1992, this was probably a neat feature that was used once or twice.  For a collector in current times, it's a blight upon the figure's veneer.  Most of the color change spots have now permanently changed color.  So, most Barbecue figures now feature dark spots all over the figure's torso.  It takes away from the figure's appearance.  So, finding a unblemished figure is worth the extra time (and, sometimes, extra expense) it takes to acquire one.

As Joe prices rose at unsustainable rates in 2018 and 2019, this Barbecue got caught up in the hype.  The 1992 Eco Warriors do not exist in the same numbers as standard 1992 carded figures.  But, even with the lower production run, they aren't as difficult to find as they sometimes appear.  After flirting with $30+ prices for a bit, this Barbecue is now more affordable.  We're starting to see Joe prices soften on many of the less popular, non army building figures of the 1990's.  And, Barbecue is an example.  While dealers will still sell a few figures for $25, you can get mint and complete with filecard versions for $15 or so without too much trouble.  That's probably a fair price for the figure.  Though, I would expect that to fall as Joe's popularity begins to sag.  If you sacrifice the filecard or the water cannon, the price falls further.

I find the price worth it for a figure of this Barbecue's quality.  But, the bright colors and late design year are off-putting to many old school collectors, too.  If I could only have one representation of the Barbecue character in my collection, I'd take the 1985 version and let this mold be Payload.  But, the overall quality of the sculpting means that some coloring of this figure mold belongs in every collection. 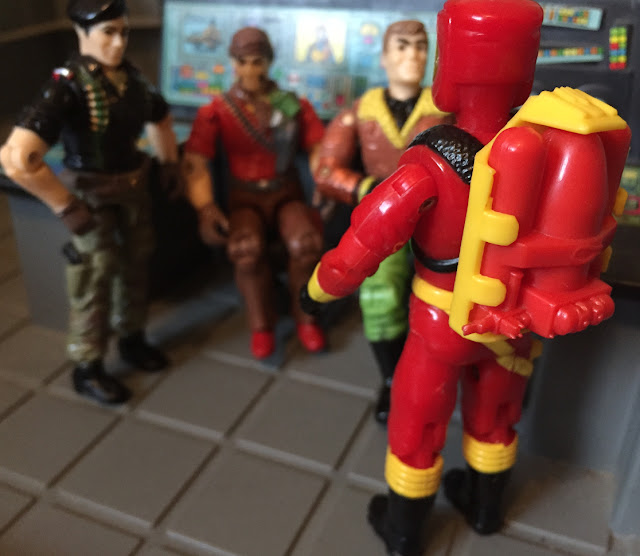 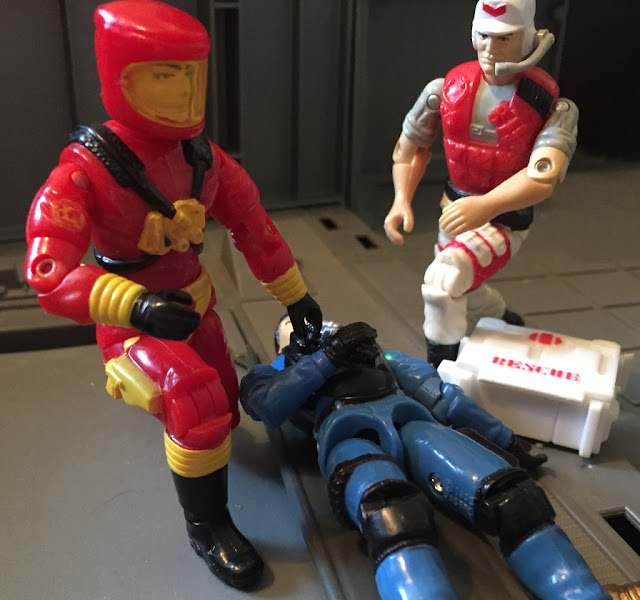 Posted by Robot_Sonic at 1:28 AM
Email ThisBlogThis!Share to TwitterShare to FacebookShare to Pinterest
Labels: 1992, Barbecue, Barbeque, BBQ, Eco Warriors