I don't recall the origin of the image below.  I seem to recall it being in a piece of Funskool promotional material.  The image likely came to me in the early 2000's and has been sitting in a folder ever since.  But, as you can see, this is an entirely different Bomb Disposal.  Gone is the bright Funskool green.  Instead, the base is done in an interesting tan color.  The arm and blast shields also aren't as glossy black as the Funskool production model.

On top of that, there is the weird Torpedo figure in the driver's seat.  The figure features a very orange chest...much darker than the yellow Torpedo that is a well known Funskool variant.

While there is absolutely nothing wrong with the Funskool Bomb Disposal that was released, having a tan alternative would have been a great addition to the line.  It would have been a more distinctive variant and something that would have warranted a purchase by many collectors who passed by a simple green shading difference.

I am not aware of any samples of a Bomb Disposal or Torpedo in these color schemes existing in the collecting world.  But, so many people like to hide stuff that there might be a few of them around and those who own them will fume that their special item made it to the light of day.  In some ways, I hope so.  It's unlikely that Funskool kitbashed this item together.  So, there's probably a few that were made at one point.  Whether they still exist, though, is something different. 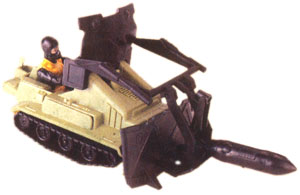