See A-Man's comments below:
This is the Duke from the Crimson Infiltrate set.  My image from 2005 was named Agent Faces.  But, it is the Duke as noted by the arms.
The Agent Faces mail away figure was a bone that Hasbro threw to collectors to get them some cheap army builders without having to resort to retail stores and the potential scalping that could ensue. And, it worked.  While some collectors were content with one figure since it was a character, those who were army builder inclined could buy this figure to their heart's content.  But, once it became known that Hasbro was going to use the mold more in 2004 and 2005, collectors backed off on Faces and saved their money for the later uses of the mold that were legit army builders.
Below you can see an unpainted prototype/test shot of the Faces figure.  The big thing about this Agent Faces figure is that you can really see the Duke head that was used to make the Faces head.  The good thing about Faces was that Hasbro painted facial hair on him that helped to distinguish him from a standard Duke release.  But, sans paint, the Duke head is plain as day.
Oddly, I like the helmet on this piece.  The actual helmet featured several different paint applications of black and silver.  In some ways, it's too busy.  The cleaner look of the unpainted helmet almost works better for me.  Though, I'd have liked the eyes painted.
Unpainted prototypes/test shots of 2000's era figures were a dime a dozen for several years.  You could buy lots of them by the dozens from Asian Joe sellers for a buck or two each.  Collectors tired of them to the point that they were completely undesirable.  Now, some of those once common figures have become more desirable...especially if they have their full array of gear, too.  It's weird to see things that the collecting community grew to hate now become valuable and hard to find.  But, that's the evolution of the collector base. 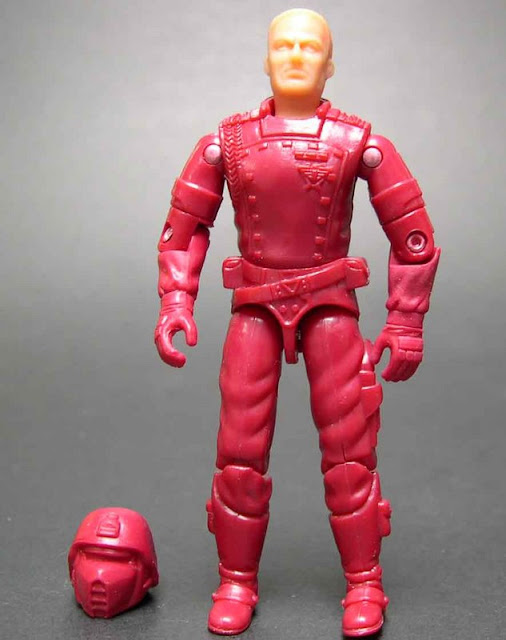 Posted by Robot_Sonic at 1:37 AM
Email ThisBlogThis!Share to TwitterShare to FacebookShare to Pinterest
Labels: 2003, Agent Faces, Prototype, Rarities