In the 2000's, it was common for unproduced Hasbro concept figures to become available from Asian Joe sellers.  At first, these figs were somewhat controversial as people talked about them being midnight runs (hence, the term Midnight Chinese) or being stolen.  Usually, these things were propagated by collectors who were hoping to scare away competition as they bought up the initially scare figs.  In time, though, Ebay became flooded with most of the figures and they sold for pittances.  Some figures were always more desirable than others.  Once such figure that captured collector attention was the light blue alternate Stretcher.
In 2004, Hasbro released the Anti Venom set as their summer companion to the Cobra Urban Strike.  The set was received cooly by the collecting community at the time...mostly because it wasn't Night Force and it wasn't Cobra army builders.  In time, though, the set was more appreciated by the collector world and the members have become relatively popular today.  Prior to production, though, the set went through some changes.  At first, the set was done in dark blue.  They, it was shifted to light blue.  Finally, they settled on the tan/green combo that was actually released.
The light blue set, though, featured one other significant change: Stretcher was still black.  In production, Stretcher was given caucasian skin and renamed to Lifeline.  But, for a while, Stretcher was the original character.  It's possible that the different skin tone was simply a function of the Stretcher mold instructions featuring the original skin color.  But, this figure became the only update of Stretcher that was ever available...despite his body mold being used twice in the 2000's.
During the time of common alternate Asian figures, this Stretcher was in the second tier of popularity.  He sold higher than Duke, Charbroil or Mutt.  But, was nowhere near scarcer figures.  15 years later, though, this figure is highly sought after and usually commands a triple digit price tag.  That's more than 10 times what I paid back then.  But, is a testament to this figure's unique design and place in Joe history. 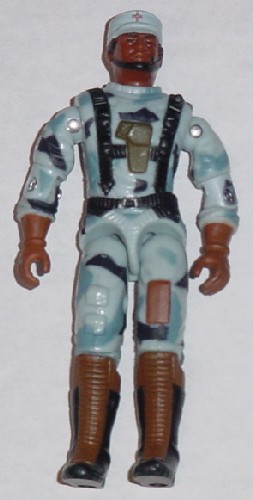 Posted by Robot_Sonic at 1:01 AM
Email ThisBlogThis!Share to TwitterShare to FacebookShare to Pinterest
Labels: 2004, Anti Venom, Bootleg, Rarities, Stretcher, Unproduced