The Power Commandos were an obscure brand of Joe knock offs that few collectors really paid attention to.  However, after large quantities of the first series of 6 figures were found in Mexico and were cheaply sold to Joe collectors, they became a bit more famous.  Lost in the weirdness of a Mummy man and his friends, though, is the fact that the figures are spectacular rip offs of Joe...even going so far as to kitbash Joe weapons.  Beyond the first series of 6 figures, though, are at least two other waves of Power Commando figures.  The first additional wave contains repaints of the original assortment as well as a couple of new sculpts.  The second additional wave, though, features some interesting sculpts for Joe fans as you will see below.

The second wave of Lucky Bell figures included repaints of the 6 figures from the first wave.  Some of the new colors are subtle.  Others are not.  This series also saw the introduction of green weapons with the figures.  Along with the repaints, there are also 6 new figures that were introduced.  Among these are some releases that any Cobra fan will both recognize and instantly want.  So, we'll start with the good stuff first.  A HUGE thanks to the Black Major for these pics.
Below are Nite Serpent and Communicator.  You will see that Communicator is, essentially, a Cobra BAT.  He has an arm attachment (though, that was released in the first series) and his head is a dead ringer for the famous Battle Android Trooper.  Nite Serpent is even more blatant.  The figure's head is a near twin of the 1985 Crimson Guard and his body (also re-used from the 1st series) is a straight homage of the 1986 Viper.  Then, there's the colors.  He is Cobra blue and red.  Honestly, Nite Serpent is more Cobra than pretty much any figure Hasbro released after 1986. 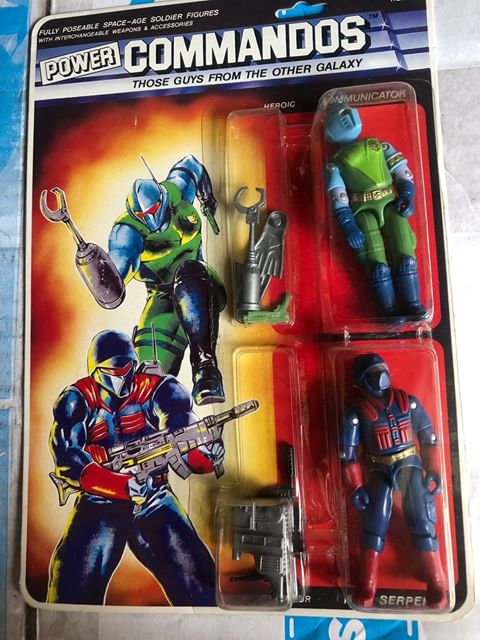 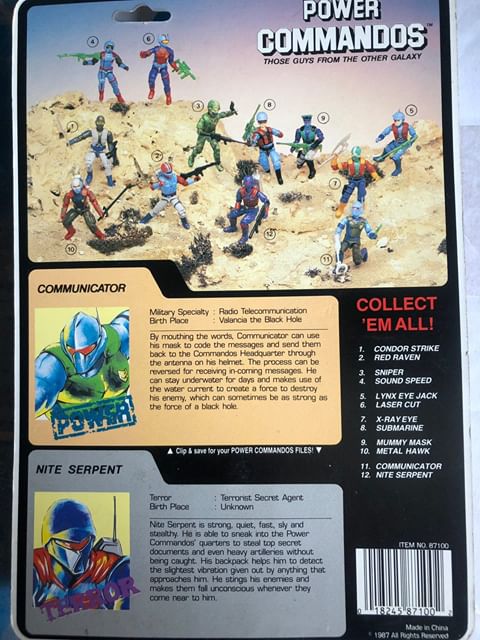 The cardback shows all 12 of the figures released in the 2nd series.  You see all the repainted figures as well as the newly sculpted parts.  Here are additional photos of the other figures where you can see the differences.  (To this day, I have never seen a Soundspeed or a Sniper figure from this series. The molds do show up in Wave 3, though.)
These six figures from top to bottom, left to right are: Condor Strike, Mummy Mask, Red Raven, Nite Serpent, Communicator and Metal Hawk.  This variant of Condor Strike features different parts than the original figure  He appears to be the only first series figure to now have major construction differences.  Mummy Mask is notable for his dark blue shirt and white pants.  Were his head colored in the same blue, this would definitely be a candidate for Cobra indoctrination.  Red Raven's upper body appears very much the same as his first series coloring.  He now, though, features white/tan pants.  Nite Serpent and Communicator were showcased above.  Metal Hawk (who might now be my favorite of the first six Power Commando figures) now has a lighter blue chest and the green pants.  Overall, if you're only casually interested in these figures, the fact that there are variants may slip by you.  It wasn't until I researched Mummy Mask a while ago that I realized these repaints existed at all. 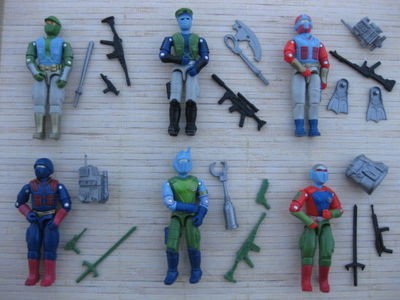 Here are two photos of Lynx Eye Jack: another of the newly released figures in the second wave.  You'll note the color differences.  But, these are likely just due to age and improper storage.  The grayer figure is likely just a sun/heat damaged version of the light blue original.  Light blue plastic does not hold up well over time and is very prone to discoloration and that's the likely culprit of the visual differences in the figures below.  In the 2nd photo, you'll see the variant X Ray Eye figure.  His main difference is the orange boots.  Though, there may be other slight shading differences on the reds and greens as well. 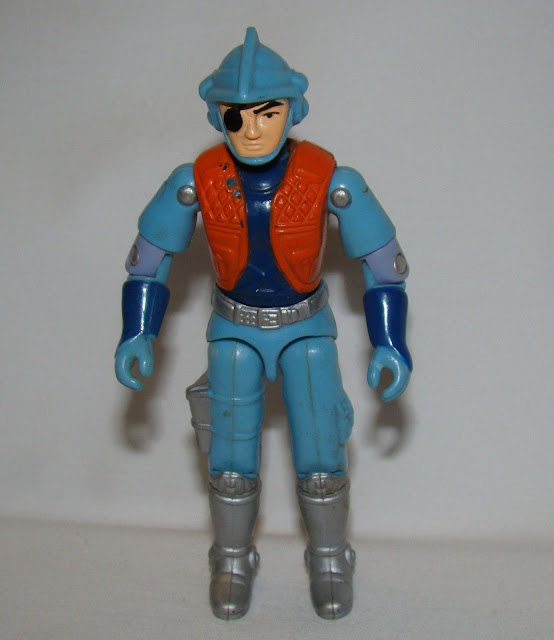 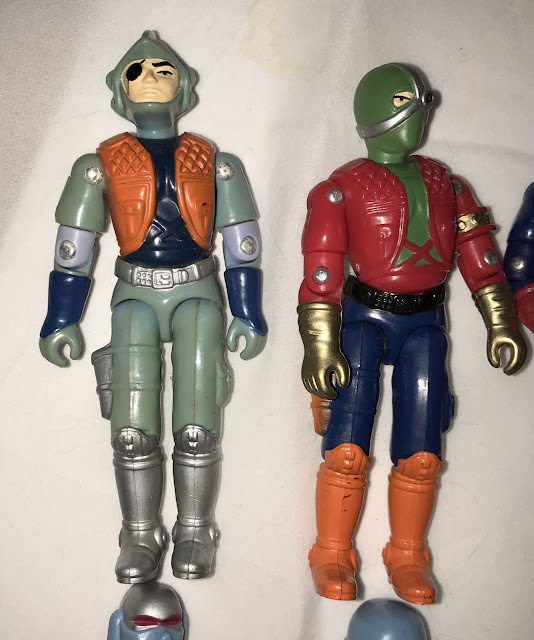 Here you can see Lynx Eye Jack's packmate, Laser Cut.  This figure features a new, robotic looking head.  The dark blue and red body makes for another figure that would be easily integrated into a Cobra army.  You can also see a better photo of the Mummy Mask repaint. 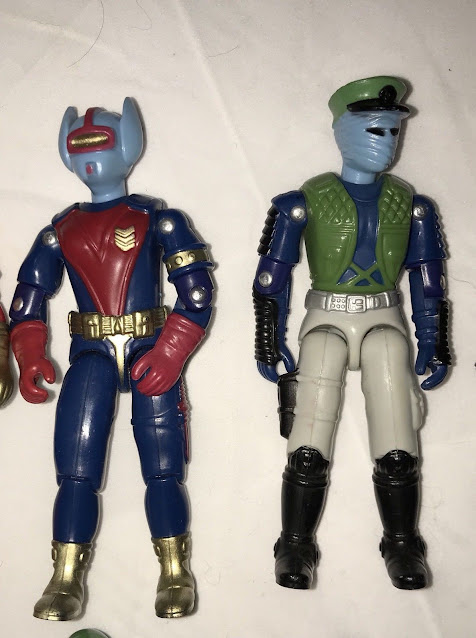 A better photo of the Metal Hawk repaint as well as the second wave Submarine figure.  Submarine appears to be a lighter blue color than the first wave (though, this could be heat/sun damage) and now features blue pants. 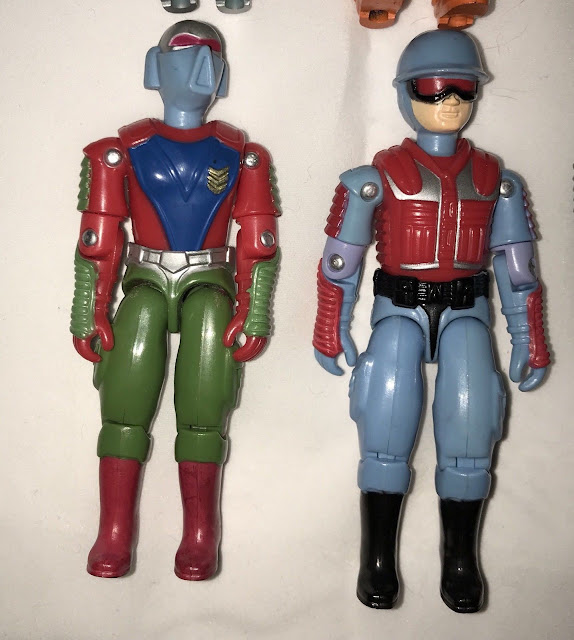 Better photos of Condor Strike and Red Raven.  Condor Strike now features a different chest and arms.  Though, his legs appear to be the same as his original release.  Red Raven also now has white pants. 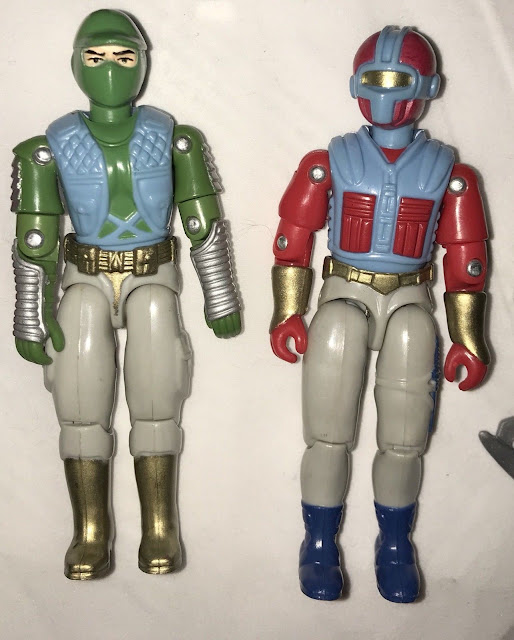 Some more photos, including some of the green weapons.  (Note, the 1996 POTF II era Tie Fighter Pilot rifle is just in the photo.  It was not included with these figures.)  There were no new weapons sculpted for the later wave figures.  Even the new figures included gear that was recycled from the original releases.  The green color, though, is new. 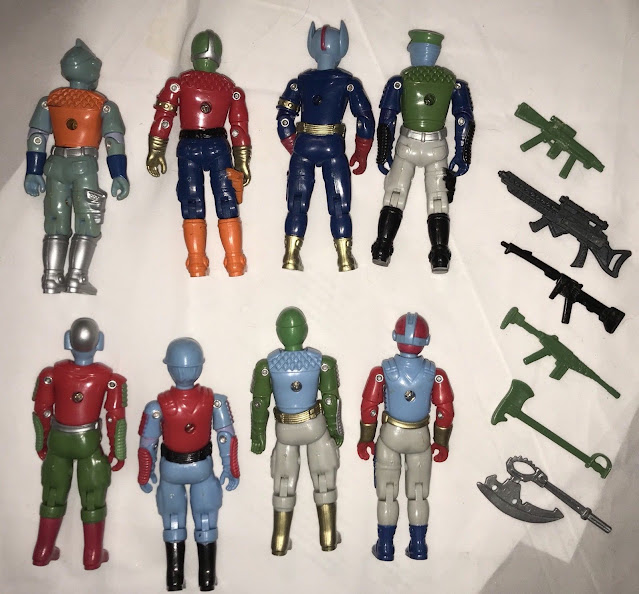 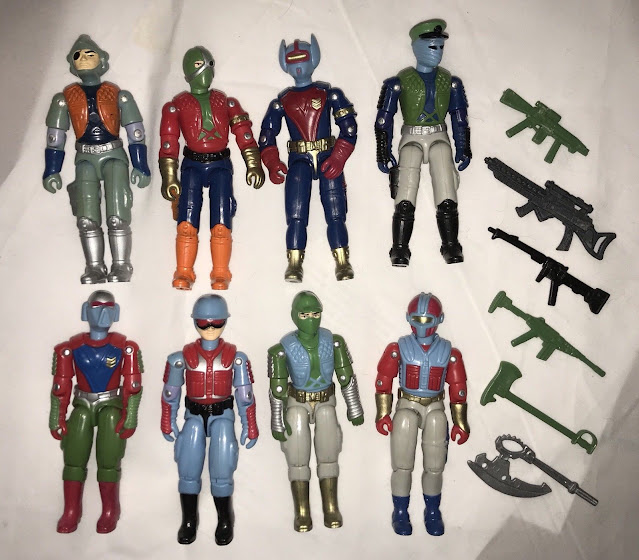 Here's a carded image of Mummy Mask/Metal Hawk.  You'll note the darker blue on Mummy Mask and his white pants.  Metal Hawk has green pants and red boots.  You see the green weapons in the package, though.  The molds of the accessories are the same as the Wave 1 figures and it doesn't appear any accessories debuted in later waves as they were all carry overs from the original releases.  But, the green color is distinct to the repainted figure wave.  You will note that the figures actually better match the card artwork.  The first wave figures featured the same card art, though, so the original releases didn't really match the coloring of the art like they did in the second series. 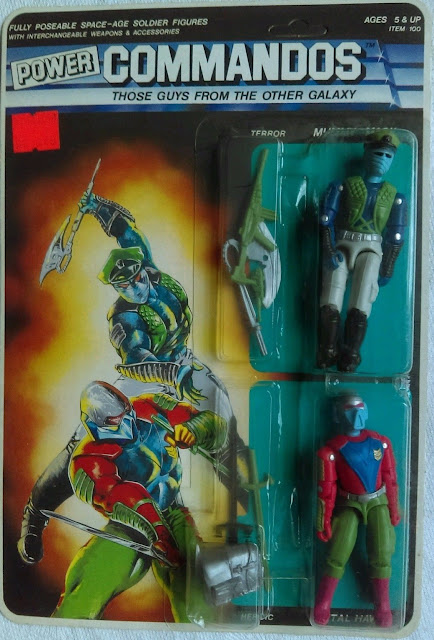 The third wave is the rarest and most desirable of all.  These figures were single carded.  You'll notice even more familiar parts in this series.  The bright colors really add to the bizarreness of the designs.  But, as "Space Age Soldiers", the overall ensemble works quite well.  There were at least 6 figures in this series and they rarely appear for sale.
The first figure is the same mold as Sound Speed from wave II.  He now has new, very 1990's colors.  This figure is very close to the Cobra Eel and even includes flippers. 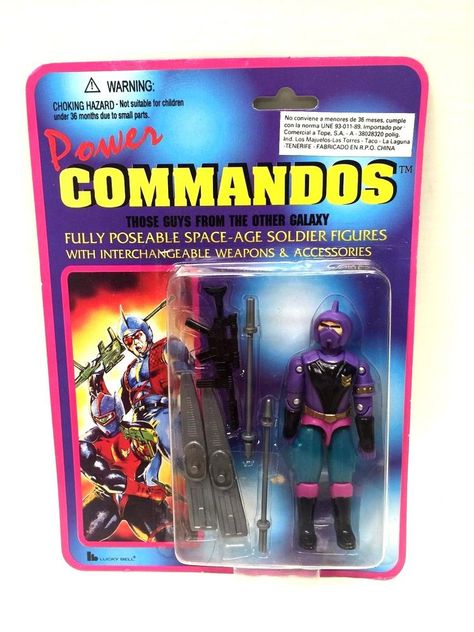 Next up is Laser Cut.  The purple colors are new to this single carded wave. 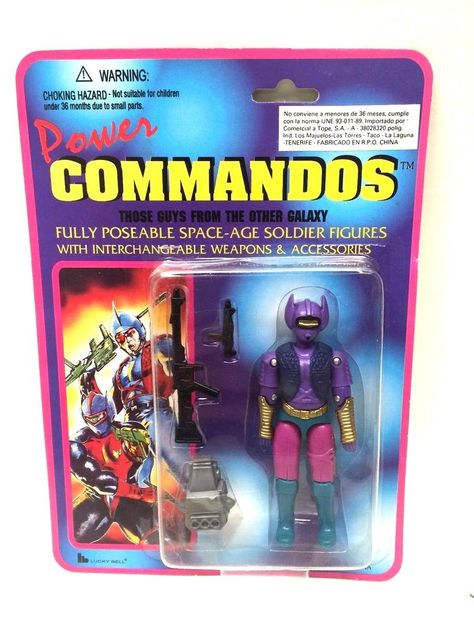 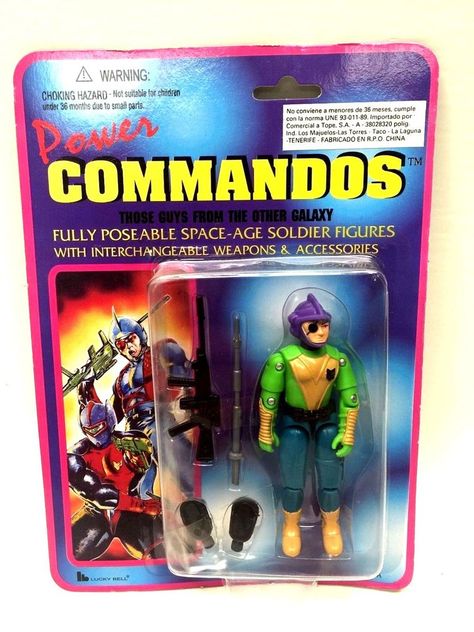 I don't know who this figure is.  He uses the Condor Strike head, but different body parts from the other two Condor Strike releases.  I guess Condor Strike liked to have a variety of outfits and not just the same style in different colors. 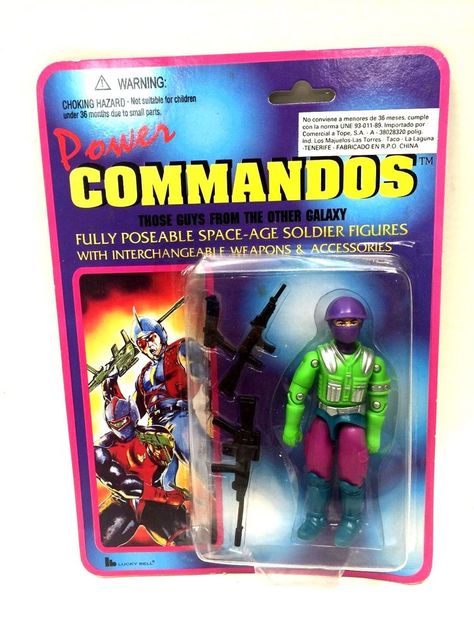 Next up is Communicator.  (Again, I'm guessing at the names based on the figure's head.)  Again, the nice purples and browns appear and would be a great complement to the purple Cobras that debuted in 1986 and later.  I love that this figure features a robotic head and hand, but also flippers for use underwater. 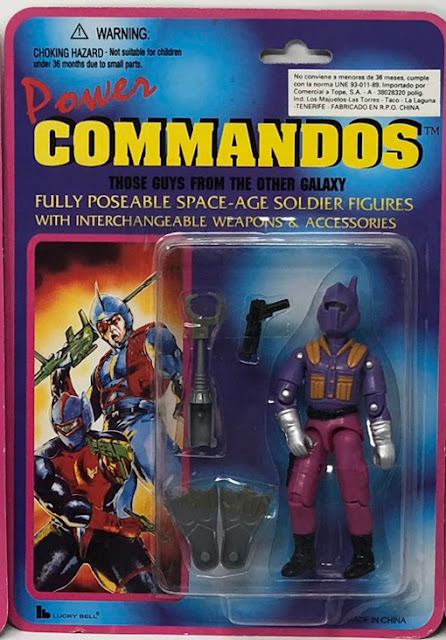 Finally, we have the Nite Serpent figure.  Now, though, he features a different chest that's derived from the 1985 Tele Viper.  This figure doesn't appear all that useful.  But, he's just so weird that he'd be fun to have around. 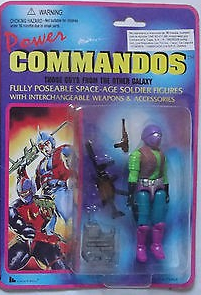 In all, the Power Commandos are a great little subset of figures for a Joe collector to find.  There's at least 24 of them.  There could be more or there could be less.  But, all of them sans the first wave are pretty tough to track down.  I'd love to see more and better photos of these guys...especially side by side comparison shots.  But, this is the best I can do for now.
Posted by Robot_Sonic at 1:30 AM
Email ThisBlogThis!Share to TwitterShare to FacebookShare to Pinterest
Labels: Bootleg, Lucky Bell, Power Commandos, Rarities