Rarely does a new version of a figure live up to its original counterpart. Some figures, like the 1991 Low Light, are better than the originals. While I'm not sure if that is the case with the Snow Serpent, I do know that they never made a bad version of him. This version I am showcasing, though, is the least known of the four Snow Serpent variations that were offered. However, after examining it, I think you will agree with me in that it is a spectacular figure worthy of much praise and more recognition that it receives from the collecting community. All three incarnations of this mold are relatively forgotten. I consider this one to be the best of them.

The figure you see below does not have its original accessories. The figure only comes with Hit and Run's rifle and a battle stand. (Which can be seen in the bagged sample.) The cool gun, snowboard and pack are from the 1998 incarnation of this figure that was available in a Toys R US exclusive 3 pack. While the Hit and Run's weapon is not bad, the figure is much more fun decked out in the full range of accessorized regalia he was originally intended to have. I use this guy as the Snow Serpent leader. The 1998's are the minions though, sometimes, the original 1991 versions serve in that capacity, too. This guy, though, is starting to see much more time. I just like the way this guys looks. The 1998's are too bland while the 1991 is too flashy. This guy is the happy medium that proves Hasbro was still capable of making a good figure in 1993, they were just too lazy to do so on a consistent basis.

One of the great things about this figure is the throwback red face mask. In the comic, early Cobra troopers and technicians all had red face masks. When the first Cobra figures were released, the masks had changed to black. Having a figure with the red mask is a nice homage to the early days of the line. It also makes this figure very unique in appearance. The cool Arctic blue blends subtlety with the white chest. The black extremities and red mask only enhance the overall appearance. The small Cobra sigils on the boot tops are the icing on the cake as far as attention to detail goes. I've had a bagged sample of this guy for some time, but have only recently acquired a loose specimen. Now that I have one, the figure really stands out in my collection. I have taken to posing figures near my desk. As I grow tired of one, he goes back into his drawer and a new figure comes out. Right now, the Snow Serpent is among the figures honored. I just like the way he looks. While I don't have much use for Arctic figures out in the now summertime desert, I still like having them around and use them on white carpet all the time. The 1998 3 pack gave me an excellent opportunity acquire a few of these molds, but I now have the figure that really makes the mold stand out among all Arctic figures.

One of the hallmarks of the Snow Serpent character has always been his gear. The original 1985 version was loaded with an assault rifle, heavy pack, parachute, snow shoes and a missile launcher. The 1991 version was more sleek and featured a rifle (That was also available in green with the Rock Fighter Guile figure.), a large pistol, 2 hoses that connected to a pack and a snow board. (The figure also featured a spring loaded missile launcher.) All of this made the Snow Serpent a figure that was heavily dependent upon his gear. However, the high quality paint job on this 1993 figure shows that the mold is capable of standing on its own without the gear. Many Joe figures derived their value directly from their accessories. This Snow Serpent is different in that it can stand on its own. The accessories only enhance a great mold.

This Snow Serpent mold has not seen much use. Aside from the original 1991 figure and this 1993 repaint, it was only used one other time: in 1998. All of these figures are top notch, though, and there really isn't any need to see this figure in different colors. There are only so many ways that, basically, white figures can be made visually distinctive. However, Hasbro largely neglected arctic Cobras in the modern Joe renaissance and most of these molds are still obscure enough that collectors would enjoy them...provided they were properly colored. As Master Collector has found the molds to both the original Snow Serpent and the Ice Viper, I could see, someday, an arctic themed convention set that would include a few of each of those molds alongside at least half a dozen of this Snow Serpent mold. At this point, I would enjoy a set like that since it would be something so different from the majority of modern Cobra releases.

In the time since I wrote this, I acquired a ton of 1993 Snow Serpents. There was a dealer selling off surplus stock in 1999 and I bought out the last of his Snow Serpents. As such, this figure now comprises the bulk or my arctic army. On top of that, though, these figures have gotten rather pricey. While I bought all I could for a measly $3 per bagged figure, this Snow Serpent will now fetch upwards of $20 if he is still bagged. Even loose, this figure will reach $15 or so. In the late '90's, there were tons of overstock bagged figures from the final years of mail ins available. Now, though, those have largely dried up and many of the once common mail in premiums are starting to get pricey. It's too bad as this is easily the best version of this Snow Serpent mold available. But, I guess his new, higher prices are indicative that collectors, by and large, have figured this out.

You can get these guys pretty easily, if you are willing to buy the Arctic 3 Pack Mail In. (Beware of this set. It is supposed to be a 4 figure set and include a repainted Dee Jay figure, but many of the ones for sale don't have him as he was bagged separately from the main 3. He is, though, pictured on the filecard.) Fortunately, the 3 packs are still very cheap and can be had under $10.00. Of course, you get three figures. While the Sub Zero is good as an army builder, I have yet to find the Stalker so. Building an army of Snow Serpents can prove difficult, but, with patience, can be done. When you outfit them with the accessories from the 1998 Arctic 3 pack, you are styling. I think this is the best incarnation and a rare case where a mail away figure is actually superior to its original version. This is a figure that is well worth picking up whenever the opportunity presents itself.

These guys are cool, but so are all the other versions of the Snow Serpent. Which is your favorite? Let me know. 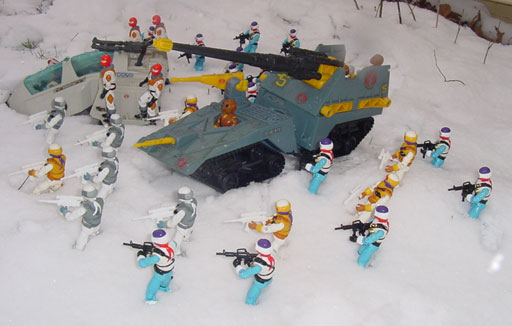 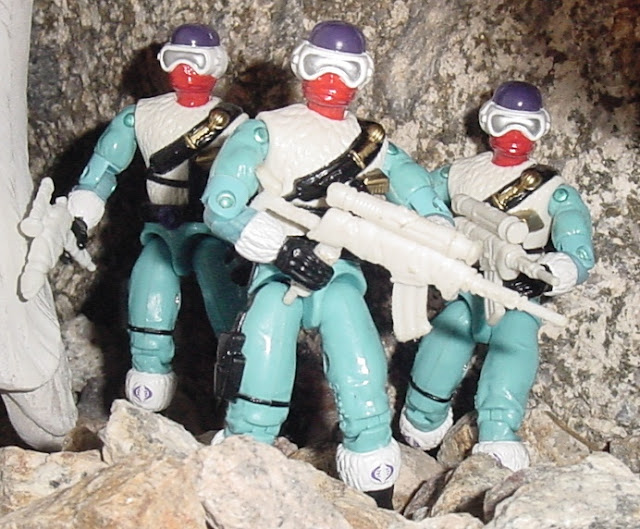 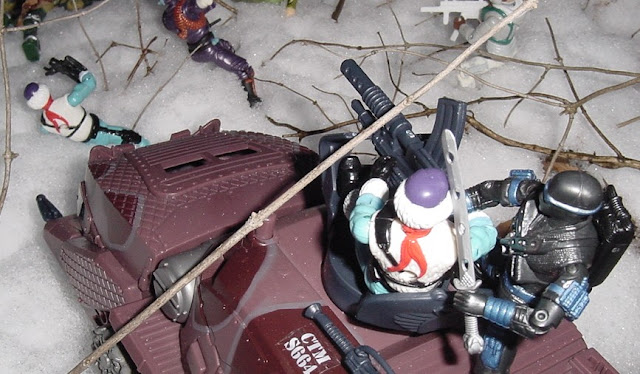 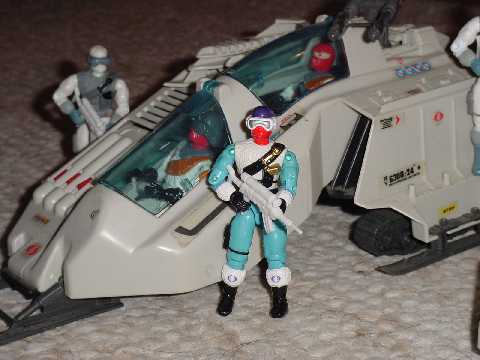 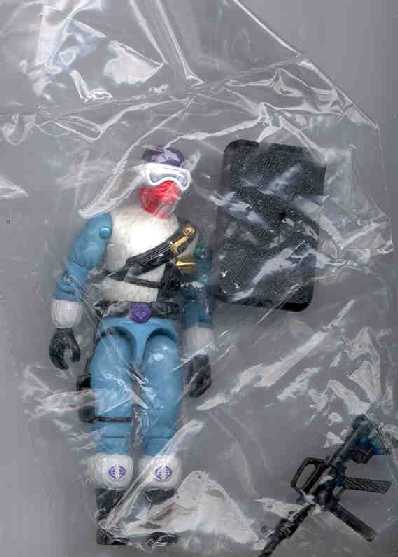 Posted by Robot_Sonic at 4:18 PM
Email ThisBlogThis!Share to TwitterShare to FacebookShare to Pinterest
Labels: 1993, Mail Away, Snow Serpent