Crystal Ball sucks.  Yes, I'm starting this profile with that base statement as there's really no way to otherwise place this figure into a proper context.  He's probably one of the worst Joe figures ever made.  Along with his classmates of Raptor and Big Boa, he fulfills the triumvirate of terrible.  It's hard to understand how Cobra's villains went from Zartan, Firefly, Scrap Iron and Stormshadow to Crystal Ball in just three years.  But, you can see the progression in both 1985 and 1986 that lead to the class of 1987 being the worst crop of Cobras Hasbro ever released in a single year.

As an idea, Crystal Ball probably had some merit.  A guy who can "read" minds as a means of interrogation would be very useful.  While torture has merits a means of extracting information from prisoners, the social connections that can be formed by a con man to his marks can be even more powerful.  To this day, top notch hackers rely on social engineering to sneak into their targets.  The marks are often unaware of their complicity until it is too late.  Tying him to the Romani superstition of a seventh son of a seventh son gives Crystal Ball that supernatural backstory of a supervillain and made him more interesting to kids of the '80's than a smooth talking friendly guy who gets you to spill your innermost thoughts.

In the collecting community, Crystal Ball really only has two niches.  He's either a joke figure who's played for laughs.  Or, he's a Dreadnok.  In the context of a Dreadnok, Crystal Ball probably works best.  Dreadnoks were societal outcasts.  And, few groups have been historically marginalized like the Romani.  It's easy to see someone like Crystal Ball falling in with this crowd...especially if he had a useful talent like parting rubes with their hard earned money.  So, even today, you'll often see a Crystal Ball figure posed with the Dreadnoks.  And, in this context, he works relatively well.  His costume looks like the ragtag, homemade ware that someone on society's fringes would wear.  The fur collar is ridiculous.  But, it also is the type of ostentatious flair that is found among the Dreadnoks.  His shield is entirely impractical.  But, is the type of MacGuffin device that would distract locals while the Dreadnoks picked their pockets or robbed their cars.

Crystal Ball entered my childhood collection near the end.  But, as it was the end, even a figure with limited appeal found a role.  While I relegated Crystal Ball to one of my brothers, I did appropriate the figure as a viable enemy.  Crystal Ball's value, though, was defensive.  His shield was indestructible.  As I was a fan of the Captain America comics around the time of Crystal Ball's release, it's no secret where this idea came from.  I didn't, though, see Crystal Ball's shield as an offensive weapon like Cap's.  Instead, Crystal Ball would lead Cobra Troopers into battle.  He would block the bullets with his shield with the Vipers lined up behind him.  In other cases, he'd act as a body guard for Cobra high command since his shield could protect them from anything.

These uses are, of course, patently ridiculous.  But, it was a way to use someone new at a time when I was so engrossed in Joe that some classic characters became stale.  It was, though, a way to appreciate the shield accessory, too.  In time, reason won out and Joe gunners would just aim for Crystal Ball's legs.  Then, he's quickly fall and his shield was useless.  It was sometimes useful against Snake Eyes or Stormshadow swords.  But, those were more one off adventures instead of being part of my ongoing story line.  So, Crystal Ball faded away.  And, when it was time to pack up all my Joe figures for posterity, Crystal Ball was among those who were left out for my youngest brother to destroy.  He simply held no value to me.  In the mid 1990's, though, this manifested itself different ways as Crystal Ball joined in with other unloved figures to form roving bands of criminals who would be tracked down and captured by Joe security forces.

Crystal Ball's filecard was written by Stephen King.  King's son, Owen, was a G.I. Joe fan.  And, in thanks for King's contributions to Crystal Ball, the Sneak Peek character's real name is Owen King.  It's a neat little bit of history for the Crystal Ball figure.  But, even that hasn't translated into long term interest in the figure or character.  You get the horror references in Crystal Ball's character.  But, it makes him a bit goofy.  With a better design, the character might have worked.

Crystal Ball looks like Vincent Price.  While such a reference is likely lost on anyone under 30 or so, Price was an iconic enough celebrity at the time that Crystal Ball's resemblance to him further boosted Crystal Ball's horror credentials.  The figure's red eyes were a bit of weirdness that gave Crystal Ball more of a supernatural flavor.  And, while this wasn't an avenue I explored as a kid, it was one that many others used as their basis for Crystal Ball's character.

In looking back at the Crystal Ball figure, though, there is a lot of quality work that went into him.  He's a perfect example of a figure doing everything right, but still not working.  Crystal Ball's headsculpt is probably the most detailed work Hasbro did on a face at that time.  He textured two-toned hair is a nifty bit of work for 1987.  His gritted teeth showcase exceptional detail.  While his open chest doesn't do much to make Crystal Ball work, the lattice string that holds it together is a nice little detail.  The rest of his outfit is finely detailed with gold paint.  As an example of toy engineering, Crystal Ball really showed what was possible with the Joe line.  The problem, though, is that the character is just too bizaree and the entire ensemble is just too out there to really land within the context of G.I. Joe.  Starting in 1987, G.I. Joe got a bit weird.  And, there were even more bizarre concepts that were proposed but didn't come to be.  Crystal Ball shows that even when these ideas were excellently executed, they were not going to resonate with kids of the day (and their later, adult collector selves) in any meaningful way.

Crystal Ball had two uses.  Hasbro produced this figure and the mold was then sent off to Brazil.  There, Estrela release a Crystal Ball figure that is very similar to the US release.  The mold never appeared again.  For years, customizers used Crystal Ball's parts to make various creations.  The small build of the figure allowed many of his parts to be used for female customs with decent effect.  There really aren't parts on the figure that would have lent themselves to repaints.  Sure, some wacky orange, yellow, blue and purple Funskool release would have been awesome.  But, Crystal Ball is really a one and done figure mold and character.

Because the current Joe market is dumb, you'll see mint and complete with filecard Crystal Balls sell in the $20-$25 range.  Which is WAY too high.  With a little patience, you can get one for $15, though.  Loose figures can be had for even less.  Carded figures sell in the $80 range, which is about the cheapest you'll find a carded 1987 figure.  Crystal Ball is not a popular figure, though.  So, it's pretty likely that this is a figure who's price will plummet when the collectible bubble bursts.  If you don't have a Crystal Ball, it might be worth it to wait out the market. 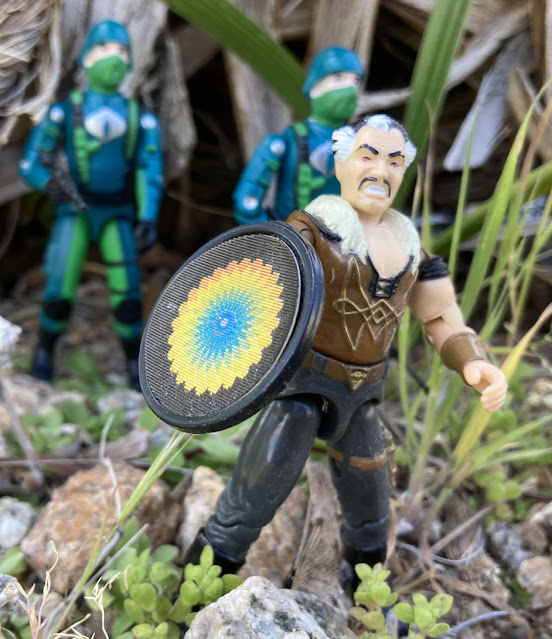 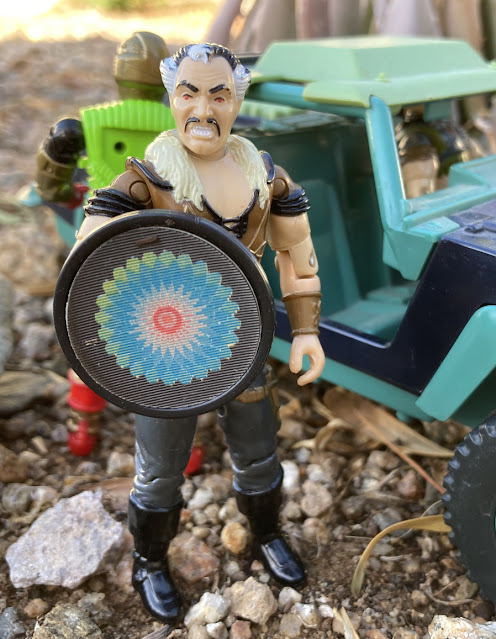 Posted by Robot_Sonic at 1:54 AM
Email ThisBlogThis!Share to TwitterShare to FacebookShare to Pinterest
Labels: 1987, Crystal Ball