So, each year I try to showcase some piece of the European Force line of knockoffs.  This year's focus is Randon.  Basically, Randon is a red 1986 Dial Tone with Flint arms and Hawk legs.  He's not the type of thing collectors would love.  Except that he's exceedingly rare and that alone causes people to be interested in him.  Heck, I'm a Dialtone fan.  And, I don't really want an all red version of him with different arms and legs.  But, at the same time, I'd totally buy this figure if I ever came across one for a good price.

All of the European Force figures have a kitsch about them that makes them interesting.  We'd have never seen some of these colors on vintage Joes.  And, the lower quality and reduced paint masks definitely mark these figures as bootlegs.  (Randon doesn't appear to have Dial Tone's mustache painted.  Yet, Hasbro did the same thing in 2000.)  But, at the same time, the entire line has a panache that makes you want it.  The fact that some of the designs have never been revisited seems a shame.  And, after the oversaturation that's occurred with the Red Shadows in the past 10 years, having MyGal as an alternative European villain would be nice.

You'll note in the photos below that Randon included a rifle originally from the Baroness.  The red weapon in the last photo was from a different line that a seller just included since it kind of matched Randon.  With obscure lines, you see things like this often.  And, absent carded samples, it can be difficult to determine real gear that was included with a figure versus aftermarket items that were added from a box of unsorted weapons.

Like all the European Force figures, high quality Randons are nearly impossible to find and are extremely expensive.  You'll pay over $100 for even a sample with heavy paint wear.  The European Force quality is not good.  But, their designs were fun.  I just wish they were more attainable. 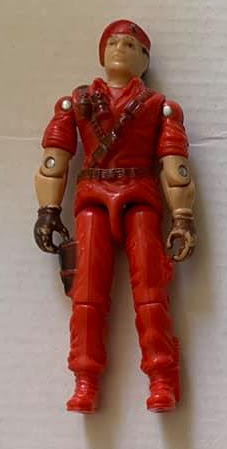 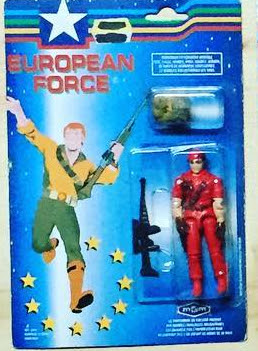 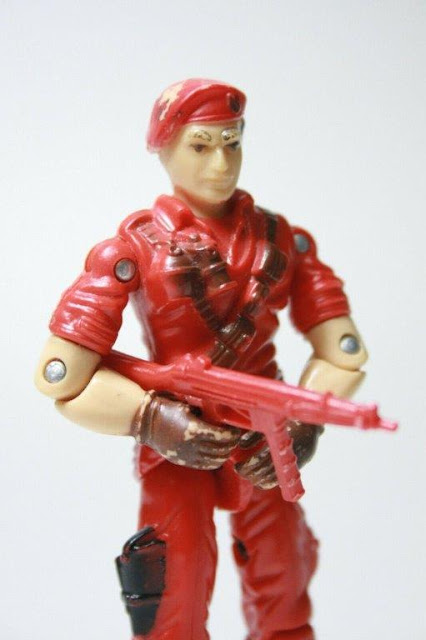