By late 1987, I was getting too old for Joes. I was in eighth grade and really couldn't be seen playing with them anymore. (Stupid peer pressure!) I had kept up my buying binge throughout 1986 and into 1987, but, by the end of the year, my purchases were falling off. I would get the Mamba helicopter for my birthday in December of that year, but that would be about it. I wouldn't get any more Joe vehicles until the mid 1990's. I had managed, though, to pick up a complete set of the 1987 figures. I figured I could still buy a couple of figures in 1988, but really hoped to get some before my birthday. Imagine my surprise when I went to Toys R Us around Christmastime and found 6 new Joes on the shelves. The 1987's had been released a bit early and I kind of expected it to happen again. Sure enough, Battleforce 2000 (It doesn't sound all that impressive now that we've actually reached the milestone, now, does it?) were the early bird figures for late 1987. The first figure I grabbed was Blaster.

Green has always been my favorite color and I think that was why I instinctively grabbed for Blaster first. In the meantime, my brothers grabbed Dodger and Maverick. They were the next best two, so I was stuck with Knockdown as my second figure. (I don't know if they had Blocker or Avalanche. I like to think I would have chosen Blocker had they had him, but it has been a few years and I'm not sure what my mindset of the day was, exactly.) Blaster, though, more than made up for that disappointment. He is an awesome figure in a great color scheme. His little mask is a frustrating accessory to find, but is great fun to have. He quickly rose to the top of my play list. (It seems that whatever was new was always my favorite figure. It still continues to this day as I tend to use my latest acquisitions more than some of the guys I've had around for a while.) At this time in my life, I loved science. For that reason, I tended to use science themed figures more than others. I made the nerds heroes. (There's no psychological reason here. Really.) As such, figures like Blaster became science officers who were capable of creating fabulous devices that transformed the face of battle. The normal, military themed figures also got a lot of use, but the science officers were the ones who came up with new machines and weapons. Since Battleforce 2000 sort of fit this genre, it only made Blaster that much more an attractive figure to use.

Blaster was originally a Transformer. I loved the name and his specialty of gunner. As such, I made a custom figure that I named Blaster. Much like the situation with Falcon, though, I managed to explain it away by having this guy be an older mentor and the younger character, portrayed by my custom, was paying homage to his elder. How Hasbro was able to use the same name on toy lines that had similar buying demographics but now can't seem to keep a trademark for more than 6 weeks is another mystery I will leave to minds greater than mine. Part of the mystique of this character was that I made him older, but also the victim of a serious injury. I made up a back story where one of the Cobra bigwigs had almost burned Blaster to death.

He escaped, but with severe lung damage. I let my Star Wars influence take over here and made Blaster's mask imperative to his survival. If he lost the mask, he would become very weak and die within a matter of hours. It was a nice way to give this guy some characterization outside of the regular Joe realm. Since he had such an intricate background, Blaster remained a favorite figure of mine until my youngest brother lost his mask. Blaster sat for in excess of 5 years without being used. One day, in either 1995 or 1996, I finally dug out my old Hovercraft shell. When I did, I checked out the main cockpit and was amazed to find Blaster's mask lying in the bottom. How I had missed this accessory in this open and easy to check place I will never know. The result, though, is that my Blaster regained his mask and once again found use in my collection.

Blasters aren't terribly tough to find. His mask, though, does sometimes pose a problem. He is not a figure, though, that will set you back a great deal. Not too many collectors have overly fond memories of Battleforce 2000. They did get killed off in the comic and I think that was indicative of their popularity. As such, I don't ever foresee any of the Battleforce 2000 figures ever being overly desired by the collecting community. Still, these figures are actually very good. I still use Maverick and Blocker a great deal. Dodger was a favorite of mine, but his popularity waned after a year or so. Blaster has found new use in my collection, but he is no longer a major player like he used to be. He is still, though, a nice figure to own and have as part of any collection. 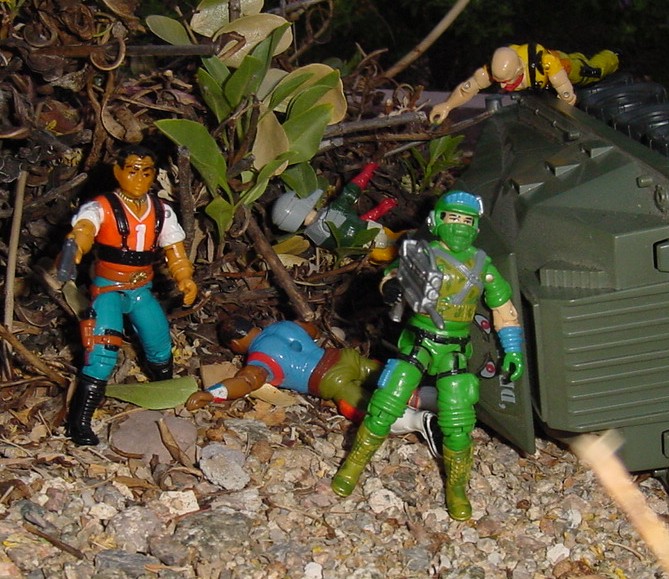 Posted by Robot_Sonic at 10:46 AM
Email ThisBlogThis!Share to TwitterShare to FacebookShare to Pinterest
Labels: 1987, Battle Force 2000, Battleforce 2000, Blaster