Periodically, I look through my older profiles to see if there is any information that I should update. When I do this, I often fill in some of the gaps in the profiles. These days, a profile is substantially longer and more structured than some of those early works. From time to time, I find a figure where I simply feel that the original profile doesn't do the figure justice. In those cases, I'll often add in addendums to the original profile. In some rare cases, I've actually profiled a figure a second time. Recently, I came across my old Mission to Brazil Mainframe profile. It was very lacking in information and was in need of an update. However, rather than spending time rehashing that older write-up, I thought it might be more fun to simply go back to one of the mold's other incarnations and start from scratch with an all new figure. Thus, the original Mainframe figure became the focal point of my most recent profile.

As a character, Mainframe was always interesting to me. When I originally purchased him, though, my initial interest was low since he did not come with a gun. This, though, was quickly rectified with some of the vintage accessory pack uzis that I had lying around. (This also gave Mainframe a link to Breaker as I had done the same thing with that figure in my earlier childhood.) This made the figure a bit more useful. As the grey, silver and black that comprised the bulk of the figure was eye-catching and somewhat unique at the time, Mainframe found his way into my Joe rotation. His status was cemented, though, with the release of the comic book where Mainframe and Dusty were showcased. This portrayed Mainframe as an older, wiser veteran. This was an idea that I took a step further as I made Mainframe the oldest of the Joes. (I also distinctively remember that the Transformers cartoon of the time did quick little profiles at the end of certain episodes that ran short. One was for Kup who was described as a "flinty, old warrior". That phrase came to describe Mainframe's character.)

Mainframe also played another important part in my childhood collection. His parts comprised my core group of 4 custom characters who were the main focus of my collection in late 1986 and early 1987. These four characters used parts from Snake Eyes, Barbeque, Footloose, Grunt, Recondo, Dial Tone, Heavy Metal and Flint. These customs became essential characters to my collection. They combined with the other 1985-1987 Joes to battle Cobra. Mainframe's parts were an essential ingredient in the mix that created these new characters. I upgraded and had another Mainframe as part of my collection, too. But these new characters were more combatants than Mainframe and saw more use in actual combat than Mainframe ever did.

Today, Mainframe is a figure who often sits in the base. But, beyond that, I just don't use him all that often. In fact, you can see the paint wear on my lone Mainframe figure as I've never really had occasion to acquire another one. From time to time, he does make it out a crew member of the Mauler. The grey color is a solid military color and works well with many of the realistically colored figures from the line's early years. In that role, Mainframe works well. Beyond that, though, I don't find much use for Mainframe. The figure is cool and the design solid. But, it's tough to use him as anything other than a support figure. That doesn't diminish the figure's quality. But, his specialty limits the amount of use the figure can expect to see.

Hasbro released their only two Mainframe figures in the same year. Both this original version and the Mission to Brazil version appeared in 1986. After that, the mold was discarded and, ultimately, was sent to Estrela where they released an exclusive Mainframe for the Brazilian market. This figure is nearly identical to the American release. After that, the mold appeared in India. Funskool produced another Mainframe for many years. Again, though, this figure is very similar to the American version. About the only thing it offers are some differently colored accessories. At this point, it is likely that the Mainframe mold is back under Hasbro's control. However, whether or not it is in a usable condition is unknown. Personally, I would like to see Mainframe return to the Joe lineup. The mold has some potential and it would be nice to see mainframe in some different colors.

Mainframes are neither hard to find nor expensive. A mint, complete with filecard figure can easily be acquired for under $11 or so. Mainframe was released during the height of Joe's popularity and even with collector sentiment on his side, simply can not overcome the sheer number of figures that are out there. But, I still feel that Mainframe is essential to any collection. The mold is solid, the colors are strong and the figure, overall, is definitely a winner. His look fits with figures from many eras and his specialty has only become more important in modern time. he is a figure that collectors should have as part of their collections. A cheap price and high quality figure make for a combo that everyone really should own. 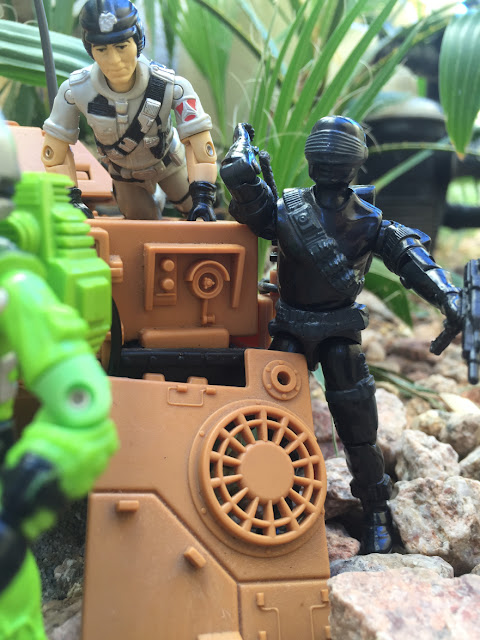 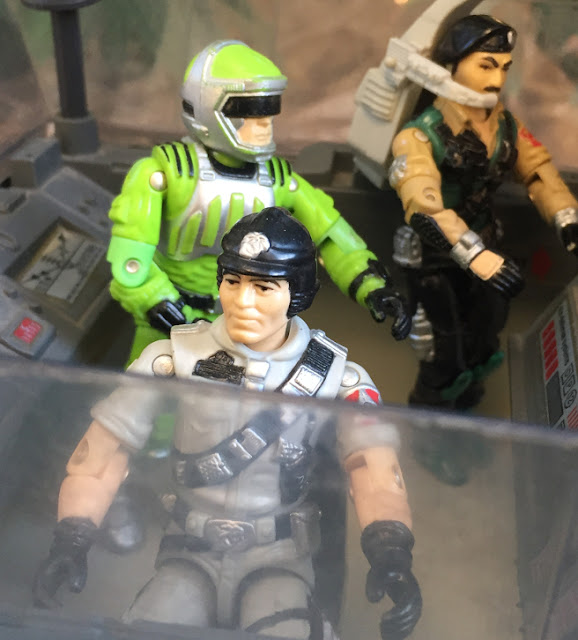 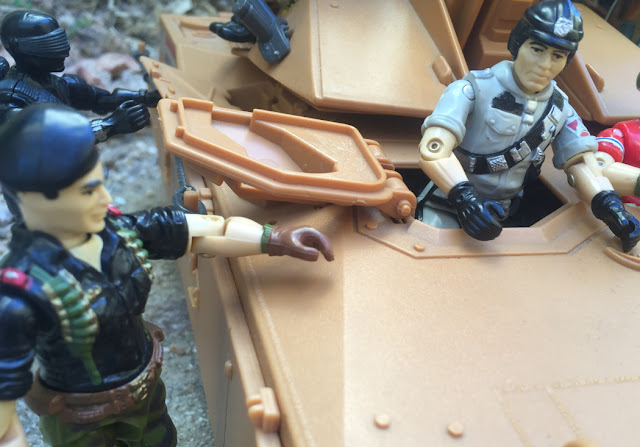 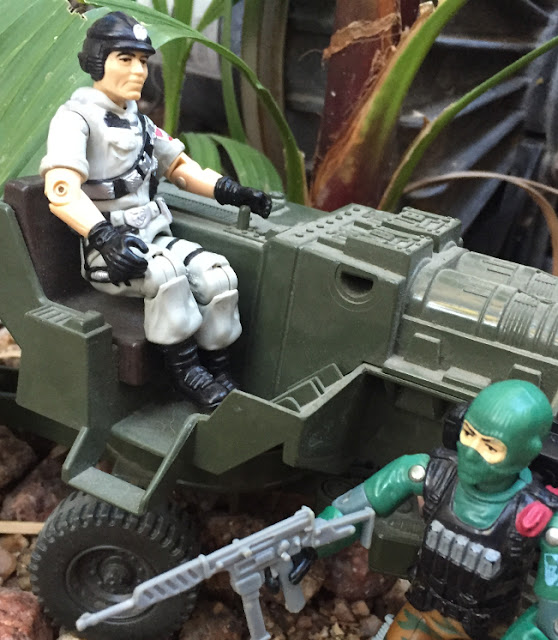 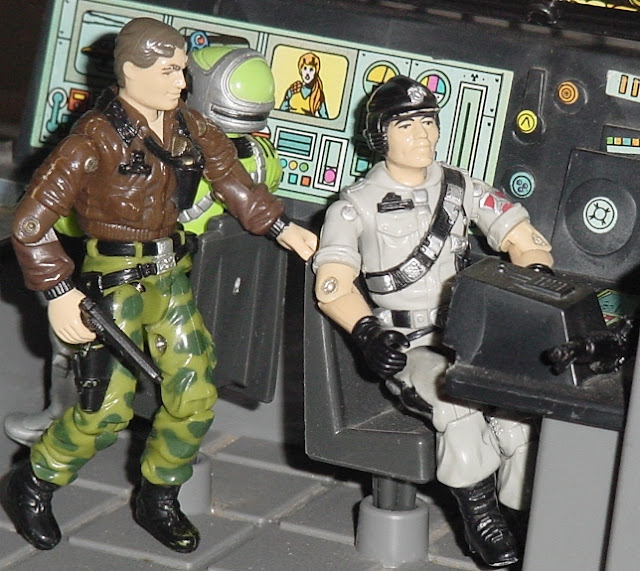 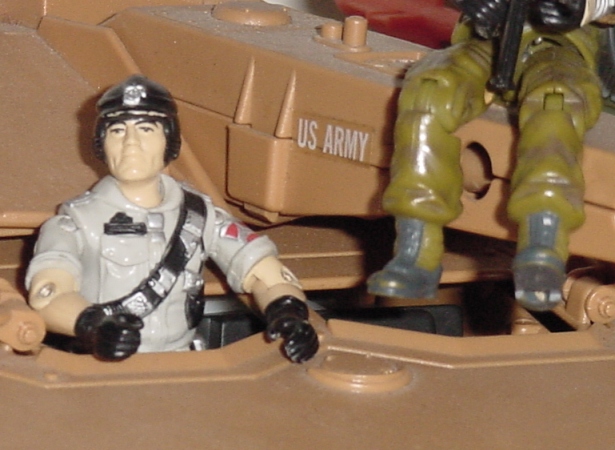 Posted by Robot_Sonic at 8:36 AM
Email ThisBlogThis!Share to TwitterShare to FacebookShare to Pinterest
Labels: 1986, Mainframe