As a kid, swamps fascinated me.  There was something about the incredible concentration of life that could so easily disguise intense danger that intrigued me.  As such, I always took advantage of rainstorms to take my Joes out in the yard and play in the "swamps" that were defined by puddles and mud.  Usually, figures in more traditional military colors were the characters of choice when this environment presented itself.  The classically cammoed figures were excellent fits for the green and brown that defined the landscape.  Alas, it was not until 1988, after I had stopped buying Joes that the line introduced a character unique to swamp warfare: Muskrat.

My first encounter with the Muskrat figure was in the summer of 1988. I was done collecting Joe and wasn't buying any figures. That summer, I was watching one of my parent's friend's homes. Their son was a few years younger than me and had a play room full of Joes. Among these were most of the 1988 figures. I looked them over and was enthralled by Muskrat. Beyond the great design and solid colors, it was his shotgun that left the greatest impression.  It was an upgrade on the shotguns from Flint and Falcon since it had both a stock and a handle.  It looked like the type of weapon that would go well with a variety of figures.  I took the Muskrat out of the plastic storage bin and gave his weapon to a few 1987 and 1986 figures to see how it looked.   The result was fantastic.  For a few weeks, I contemplated actually buying a Muskrat figure.  Unfortunately, the allure of sports cards and the money to be made selling and trading them (plus the more socially acceptable sports theme) kept me from regressing back into buying toys.

But, I would hold off until the summer of 1990 before I would actually give in and buy a new figure.  (The '89 Night Viper.)  In retrospect, that probably didn't hurt me too much.  The 1988 figures had their moments.  But, none of the traditional retail figures from that year have really taken on a aftermarket life.  But, I do feel that having a few more 1988 figures in that final, transition year of my childhood could have been fun.  Maybe I would have developed more of a personality for this figure.  He very well could have been as fun to use in my various play areas as Hit and Run.  But, what's life without a few regrets?

The paint details on Muskrat are somewhat lacking. The figure is only black paint on the green base with a smattering of brown on the boots.  But, in this case, the simplicity is effective.  For someone traipsing through a swamp, you don't need much beyond the standard green of the plant life around you.  So, Hasbro was able to save a bit on the paint applications that could then be applied to other figures.  But, for some reason, in 1988, Hasbro really didn't do this.  Shockwave, Repeater, Budo, Destro, Stormshadow, Wildcard, Ghostrider and other figures all feature large, undetailed portions of their molds.  Hasbro really skimped on paint applications across the entire year.  It might have been fallout from the failure of the Joe movie or just expected sales slumps.  But, the cost cutting doesn't make sense when you see the the increased detail that started to appear in 1989.

Accessory-wise, Muskrat is OK.  His shotgun is excellent.  The fact that it appeared with a large number of 1993 and 1994 figures is a bonus as it makes the acquisition of extras very easy.  It is nicely scaled with the figure and works in ways that other shotguns do not.  Beyond the gun, though, Muskrat's accessories get weird.  He includes an awesome machete.  But, it's baby blue.  I don't know why since most other 1988 figures have accessories that are sensibly colored.  Again, though, black versions of the machete are easy to steal from figures from the line's final years.  So, that helps.  Finally, he includes some type of boogie/surf board.  It can be attached to his back like a pack, or to his foot to have the accessory function.  The result is something that is odd and not useful.  As a pack, at least, the board can double for armored protection.  Beyond that, though, it doesn't make much sense.

In my collection today, Muskrat doesn't get much use.  He's a solid figure, but not a character to whom I have great attachment.  He was an adult acquisition and that leaves him without the childhood memories that make most of the 1982 - 1987 figures so important to me.  But, the figure is not without his uses.  His classic colors allow him to blend with Joe teams from a variety of different years.  So, he is a nice bridge figure between a team of 1985 and a team of 1994 Joes.  But, he doesn't have much character.  I've never really gotten around to creating a personality for Muskrat.  The upside is that this remains a figure of untapped potential in my collection.  The downside is that it's fairly unlikely that this figure will ever get the type of display or use that his quality really deserves.

﻿Muskrat was released in the U.S. in 1988 and as a Night Force figure in 1989.  After that, the mold appeared in Brazil as part of the very rare Forca Electronica subset.  Then, the mold appeared in India where Funskool produced a Muskrat figure nearly identical to the original American release for many years.  (The upside to this figure is that it includes a silver machete instead of the baby blue version.  A great upgrade!)  The Muskrat mold was one of the first 18 molds that Funskool returned to Hasbro in 2003.  While Hasbro never produced another Muskrat, the body mold was used for the 2004 convention exclusive Dreadhead figures.  It then made it's final appearance as the basis for the 2004 Chief Torpedo figure that was included with the VAMP/Whirlwind set.  The Muskrat mold still has some life in it since three of the 4 releases of the character are based on this version 1.  A desert version or a repaint with a complex cammo pattern would be a welcome addition to the Joe world.  But, the chances for figures like that are likely gone and collectors are left with several high quality, but similar Muskrat figures to track down.

Muskrat figures are not expensive.  He is easy to find with no paint wear and complete with all his accessories.  Like most 1988 figures, though, Muskrat's elbows tend to crack.  Finding a figure without this flaw is difficult.  But, most Muskrat figures will sell for under $7.  That's a great price for a figure with a high quality mold done in traditional military colors who includes well done accessories.  Like many high quality Joe figures from the early years that saw full retail production runs, Muskrat's popularity in the marketplace has declined quite a bit in the past few years.  But, many collectors still have him and consider him a solid Joe team member.  Had I owned this figure as a kid, he would likely be much more important to me.  But, that lack of emotional attachment doesn't diminish his quality at all and makes Muskrat a worthy addition to any collection. 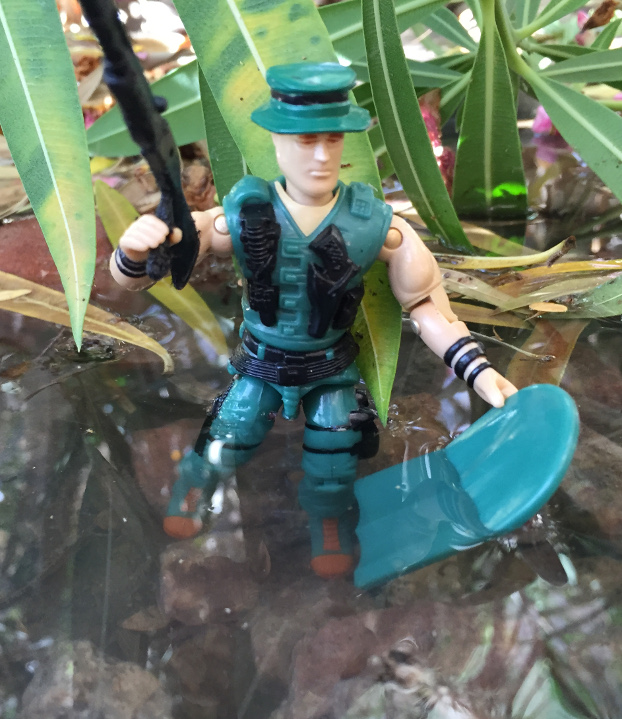 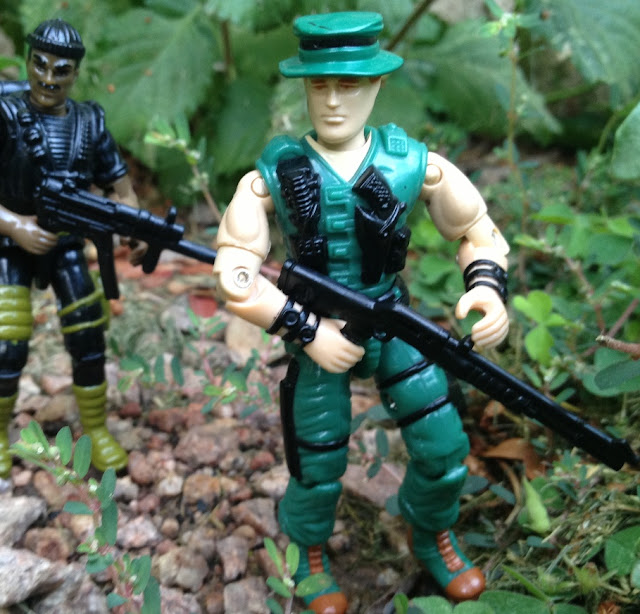 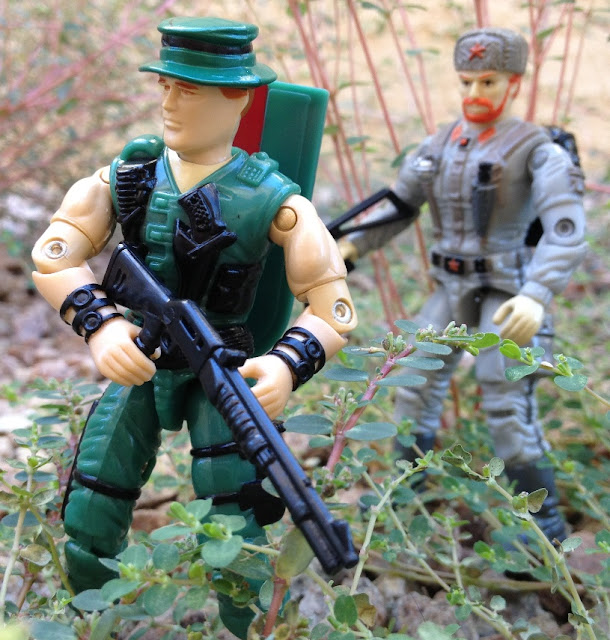 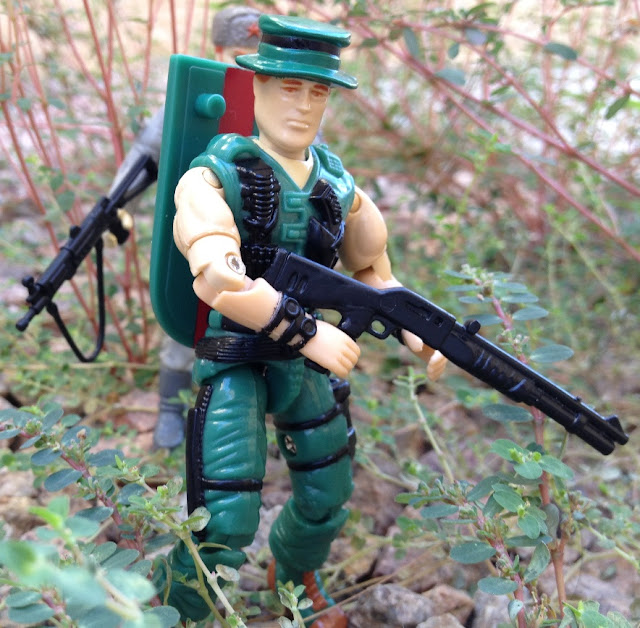 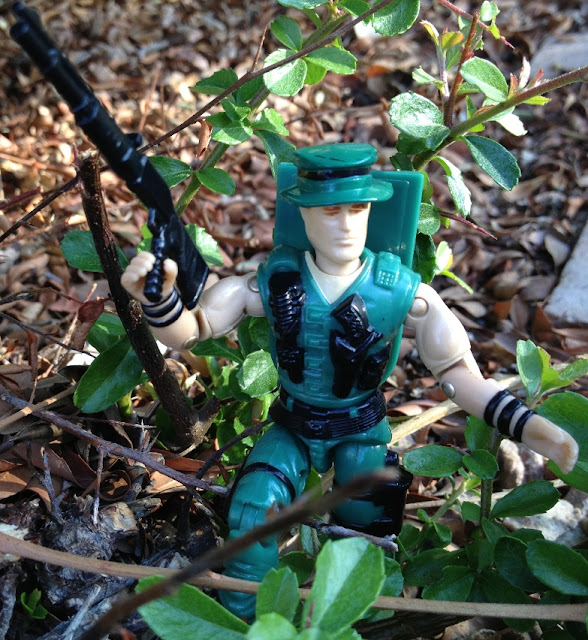 Posted by Robot_Sonic at 10:37 AM
Email ThisBlogThis!Share to TwitterShare to FacebookShare to Pinterest
Labels: 1988, Muskrat