Major Bludd has long been one of my favorite Cobra villains. There was just something about him that captured my attention as a child and he has remained a character who has always been a significant player in my Joe collection. However, it has always been his original figure that was the representation of the character to me. Bludd was not revisited during my childhood. So, it was only as an adult that I came across new Major Bludd figures. I missed the Sonic Fighters version in 1991, but did find Hasbro's interpretation of the character in 1994. However, despite finding it a few times at retail, I simply could not bring myself to purchase the figure. The red weapons and purple color were just too much of a departure from the Bludd I knew. By the time I decided to buy any Joe figures I could find, though, Major Bludd had basically disappeared from retail. In 1999, I acquired a test shot of the figure and was surprised to find that the mold featured a knife molded onto Bludd's arm. This sparked an interest in the figure for me and I quickly tracked down a loose version to add to my collection.

Like most of the 1994 figures, Major Bludd's mold has great potential. The sculpting is solid and is true to the character. But, the color choices leave much to be desired. The combination of purple, black and red isn't a terrible departure from traditional Cobra colors. (Especially in light of the multitudes of Cobras who chose purple as their primary color.) But, they are a quite a leap from the subtle brown and black uniform that defined the first Major Bludd. Were this figure done in those colors, it would likely enjoy quite a bit of collector attention.

This mold isn't without its problems. The high collar and open chest are very reminiscent of Destro's disco inspired original outfit. The head is the true value of the figure. The large mustache is a Bludd trademark. But, the helmet is a nice homage to the original figure while being updated in a way that shows the improvements in figure sculpting over 11 years. The key feature to the figure, though, is the hidden blade on the figure's right arm. While the original Bludd had the armored right arm that limits the movement on the vintage version, this Bludd has the knife that tucks into a sheath beneath his forearm. It's not a feature that intrudes upon the figure in traditional display poses. But, it adds something very nice to Bludd as he has a built in accessory that is unique to him across the entire Joe line.

I have never really used this figure as part of my collection. The figure did not enter my collection until adulthood and there are much better versions of Bludd that are more true to the character. As part of a 1994 display, this figure works very well. But, the odd colors and non traditional look for Bludd prevent this figure from ever being more than a dio filler in anything I do. It's not that this is a bad figure. It just came out at an odd time. Being a Cobra, I missed this figure as the Joe line died at retail. So, I don't have those 20 year old memories of finding him as I first came back to collection like I do with many other 1993 and 1994 figures. As part of the line's history, this is a nice way to update Bludd and use him as something outside of his more traditional appearance. But, the opportunities to do that are less and less for a collector like me who is such a traditionalist.

The head, arms and chest of this figure were only released in 1994 for Major Bludd. (The legs are from the 1991 Toxo-Viper.) It is likely that Hasbro would have repainted this figure in 1995 had the line survived since that was their M.O. at the time. The mold has not appeared in the 20 years since this original retail release with the exception of the head being used in the 2003 Python Patrol set and again in the 2006 Convention set. What's odd is that Hasbro did revisit the classic Major Bludd color scheme in 1994 for the Chinese exclusive Major Bludd figure. So, maybe the plan was to give this mold a re-do in Bludd's traditional garb. It's a fun speculation, but nothing more than that.

If you want this figure, he's not hard to find. Mint, complete with filecard, this figure can be purchased for under $5. But, it's probably easier to just buy him carded since one of those will likely run under $10. Of the Major Bludd figures that are available, this is the least desirable by far. It lacks the distinguishing browns and blacks of Bludd. The colors are almost cartoonish in their appearance and this figure in no way conveys menace and evil. As such, this is never going to be a vital figure for any collector. There are too many other Major Bludd figures out there that are almost perfect. 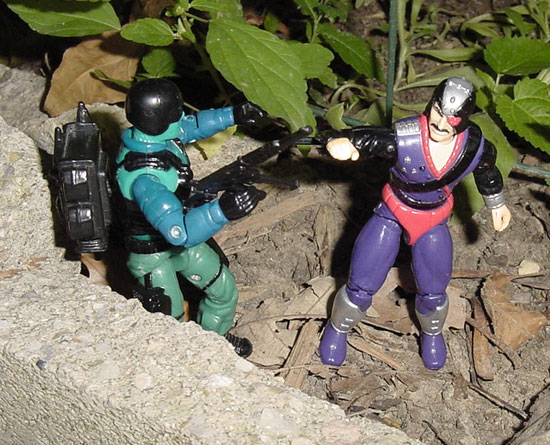