The Crazylegs mold is solid enough. It is somewhat basic as it doesn't have a lot accouterments molded to it. But the mold is nicely textured and solidly detailed for what it is. The mold is actually somewhat bulky in appearance. While I hated that as a kid, it is a nice little detail that doesn't jump out at you even though it adds to the overall realism of the character.

The accessories are cool, if unspectacular. The rifle is small and interesting. I always felt that it was very similar to the weapons used by Cobras in the cartoon. The little stock, though, was somewhat confusing. While it was a nice feat of engineering to make the stock removable, it feature added little to the figure. As such, it was something to appreciate but not really enjoy. The parachute pack, though, was a failure. While it was realistic in how it affixed to the figure, the required bulkiness made it impossible for Crazylegs to wear it and be posed sensibly. Plus, it didn't work. While this was an improvement over Ripcord's chute in terms of realism, it was a step backwards as a toy. Ripcord's chute had the hole for the mask and was intricately detailed...even though its design required the odd strap on the back. While Crazylegs' chute was more like what you'd find a local skydiving club, it made for a poorer toy.

My first encounter with Crazylegs was on the back of my first Falcon figure that I acquired in December of 1986. I remember looking at Crazylegs and thinking how cool the small picture of art was. I imaged that he would have to include an air mask like Ripcord and might even include a working parachute. While the figure looked red, it was not until I walked into a Children's Palace store in early 1987 and first found the figure at retail that I realized just how red he was. On top of that, all the cool accessories I had imagined for the figure were no where to be seen. Plus, he had this weird quilty suit that just didn't live up the expectations I had set for the figure based on the artwork.

So, rather than waste the one figure I was allowed to get on a disappointment like Crazylegs, I bought another figure. For the life of me, I can not remember who it was. It might have been Outback. But, I remember pawning Crazylegs off on my little brother. (I always convinced my brothers to buy the crappy figures I didn't want. That way, I would still have the figure, but not waste any of "my" figures on toys that were disappointing.) When we got to the car and opened our figures, I was even more disappointed in the figure when I realized that the only way to attach the parachute pack was to make the figure's legs spread apart. So, a figure design I didn't like was made worse by the fact that the only way to use his accessories was to put him in a ridiculous pose. Naturally, Crazylegs did not get much use in my childhood.

If you fast forward a few years, though, I rediscovered the Crazylegs mold. While the coloring still had its shortcomings, I grew to appreciate the mold a bit more. In fact, I went so far as to find a place for the figure in my then small collection. I enjoyed the figure, but still felt the colors held it back. When I first discovered online Joedom, though, that problem was quickly solved when I learned of the Night Force Crazylegs figure. It had the solid mold of the original but was done in decent colors. Of course, when I went to find one, I discovered that they appeared rather infrequently and were rather pricey. (Even in 1999, Night Force figures were expensive. I remember a lot of 12 complete figures selling for more than I spent to buy a lot of over 70 mint, complete figures from '86-89: including a Starduster, 2 Rumblers and a ton of army builders.) As such, the figure remained elusive. Finally, I was able to trade for a decently conditioned (but certainly not mint) version of the figure. He immediately found great use in my collection as an integral part of helicopter missions, insertion teams or just outright assault squads.

Now, the figure holds the same position. As he's no longer new to my collection, he doesn't see the use he once did. But, he still remains an important part of my collection. As the original Night Force Crazylegs I acquired lacked his parachute, I found that the Argentine Fuego figure has a decent replacement. It is a brown Ripcord backpack that meshes well with Crazylegs and also gives him the mask. The best part is that Fuegos are dirt cheap and you can get a MOC version for less than you would spend to just get the Night Force Crazylegs parachute.

The Night Force figures were largely good, but not great. While Outback, Tunnel Rat, and Falcon were solid figures, they were not substantially better than their original incarnations. Crazy Legs, Psyche Out and Sneak Peek, though, could be considered upgrades. The issue with the Night Force set, though, is that the colors remained too consistent and start to get repetitive once you get a few of them. Alone, they are nice figures. As a whole set, they get boring and mundane. I think that's the reason I've been so slow to add the Night Force figures to my collection. Once you have a couple, you see diminishing returns on the rest. Fortunately, the characters that are the best upgrades are also the least popular and tend to be the least expensive.

As a character, Crazylegs doesn't have much to offer. He was killed in the comic with almost no use. As such, he really isn't a player in most people's Joe worlds. Personally, I've done little with his characterization beyond having him be a common infantryman. He doesn't have large personality quirks and isn't a character who's anything more than combat filler. But, a collection needs characters like that. A team of huge personalities is less likely to be cohesive than one that has a few subordinates who just follow orders and do their job. Crazylegs fits that position well and has found a home based on that.

The Crazylegs mold has had a long history. The figure first appeared in the US in 1987. This figure appeared in 1988. Around that time, the first Alado figure that used this mold appeared in Argentina. It then appeared almost simultaneously in Brazil where it was also released as Alado. Both of these South American versions are highly similar to the US version and included all the original Crazylegs accessories. Some time in the mid to late '90's, the Crazylegs mold appeared in India. There, it was used to make not only another exclusive Crazylegs figure, but the head also appeared on the very unique Skydiver figure. Since then, the mold has not appeared again, though it is likely that Hasbro is now in possession of it. Truth be told, I don't really think we need another Crazylegs figure. Granted, I would not be disappointed to see it return, but feel that the Night Force version is adequately available for a minor character like Crazylegs.

All the Night Force figures are hard to find. That's reality. As they were exclusive to a retailer who, at the time, was not fully saturated around the country, it was likely that large numbers of kids who would have bought these figures never even knew of their existence. The result is a group of figures that is difficult to find in any condition and that can be downright maddening to find complete. That isn't to say, that deals can't be had. While highly popular Night Force characters routinely sell for close to $50, you can still get mint, complete Crazylegs figures for under $25. Collectors largely don't care about Crazylegs and his figures (hard to find or not) are priced accordingly. My feeling is that if you're going to have a Crazylegs in your collection, it should be the Night Force version. It is just so superior a coloring to the original that it makes the character worth owning. 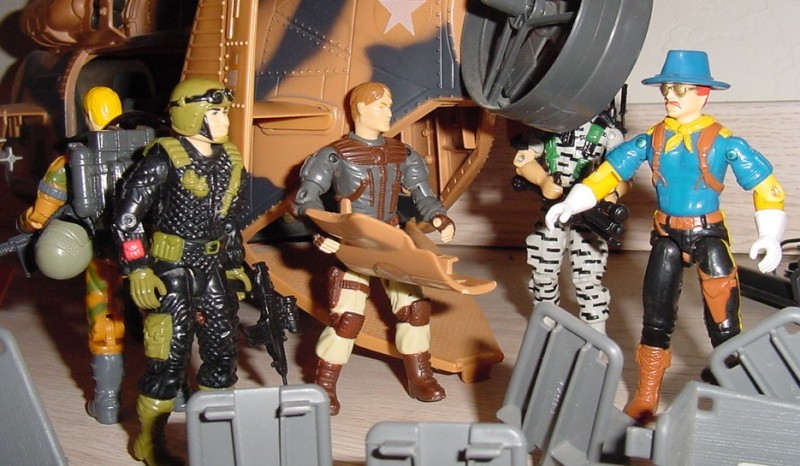