When I first heard that Duke was the winner of the most recent YoJoe.com Feature Character Spotlight, I was disappointed. The first three spotlights all focused on characters that I wanted to profile. In this case, though, I am less enthused. It has nothing to do with the fact that this spotlight in on a Joe. It has everything to with the fact that this spotlight is on Duke. For whatever reason, the Duke character has never clicked with me. Even from the time when I got his first mail-in figure in early 1984, I have never been able to get behind the character. For a figure with as many versions as Duke had, he has only appeared here once before. In that profile, I told of how I use that figure as a totally different character. Well, surprise, surprise, the same holds true of this Duke figure.

In my collection, this version of Duke is a totally new character. In my previous Duke profile, I spoke of how that character turned into a martyr for the Joes. Well, the character represented by this figure joined the Joes due to the other character's downfall. This character is a highly competent and impeccably trained soldier who finds himself reluctantly thrust into a leadership role after he saves a battle for the Joes. Unlike the previous character who became tiresome, though, this character has a darker side. He does not want to be in the position he has been forced into. However, his sense of duty keeps him there as he discovers he was meant for his new purpose. That does not, though, reconcile his doubts and this character remains troubled, even with his successes. His problematic nature makes this character more interesting than my previous attempt and has kept this figure near the forefront of my collection for well over two years. (Especially after I had him kill Cobra Commander. It was a setup by the new leader of my Cobras but gave this Duke character instant credibility.)

I'm not sure why I don't like Duke. I think it has to do with the fact that his character got boring. There just wasn't much to do with him. I found him rather boring in the comic and was never a real cartoon fan. So, the character didn't much for me. Even as a kid, I didn't use Duke all that much since I had Hawk as the leader of my Joes. The nice thing about this is that figures like this 2001 version of Duke can be easily repurposed to new characters. For some reason, that seems to be the fate of Duke figures in my collection. But, since he tends to get solid molds and good accessories, I want to use the figures, even if the character doesn't suit me.

There is some debate as the to true year that Duke was officially released. Frankly, there is evidence to support both sides. Duke, and rest of his wave, made their first documented appearance at American retail stores a few days before Christmas 2000. On top of that, his figure wave only had 3 new packs in it and the case assortments carried over 3 packs from the first Wave of 2000 Joes. As such, it is easy to say that he was released in 2000 and should be considered part of that year's releases. However, historically, some of the next year's Joes have leaked out a bit prior to their intended release date. (I remember getting Lt. Falcon and the Battle Armour Cobra Commander for my December birthday in 1986.) These figures who get out early, though, have not, historically, been penalized for their premature appearance at retail and are considered as part of the next year's line. (The same thing happened to Wave 5 this year.) This points to Duke and his Wave as being the first official 2001 Joe releases (especially when you consider that Wave III didn't hit retail until after Memorial Day!) rather than the final assortment of 2000. Neither way really matters. I classify this figure as 2001 as I feel the historical precedent requires it. Others will not. In the future, it could be a source of confusion but I think this figure is so available that it really won't be an issue.

This Duke mold was a welcome site in 2001. It hadn't been used in 10 years and was a high quality original release. However, Hasbro quickly killed the mold with overuse. It appeared in Wave IV as the body for Leatherneck. Those two quick releases that were largely pegwarmers soured collectors. The mold was planned for use in late 2003 for the Wal Mart Exclusive Sky Patrol Duke. While that figure was not, technically, released, large quantities of them made it into the collecting world and are available. The mold actually has some potential left and could be used for some high quality repaints of Duke or use for other characters. But, that is never going to happen.

2001 Dukes are easy to find. Wave II was the scourge of collectors everywhere and was widely available both in the U.S. and Canada. Many stores finally discounted the wave to move the huge quantity of pegwarmers that were left over. Even today, you can get this figure MOC for under his original retail price. In my opinion, that is a pretty good deal. As far as Duke goes, this figure is one of his better interpretations. If you want to use Duke in a non-desert setting, this figure is your best way to go. This doesn't mean, of course, that this figure will ever unseat some earlier versions of Duke as the primary mold for the character. But, he does offer a nice change from Duke's typical appearances. In the long run, though, I just don't see this figure ever climbing out of the bargain bins. Too many collectors have this figure and many of them are so sick of him from the pegwarmers of 2001 that they never want to see him again. I think this is an unfair burden for this figure to carry as he really is a mold that I use frequently. Given a chance, I think more collectors might feel the same. 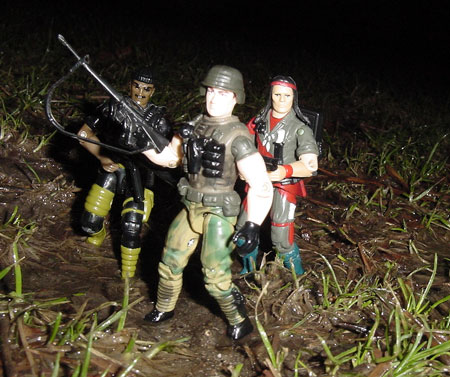 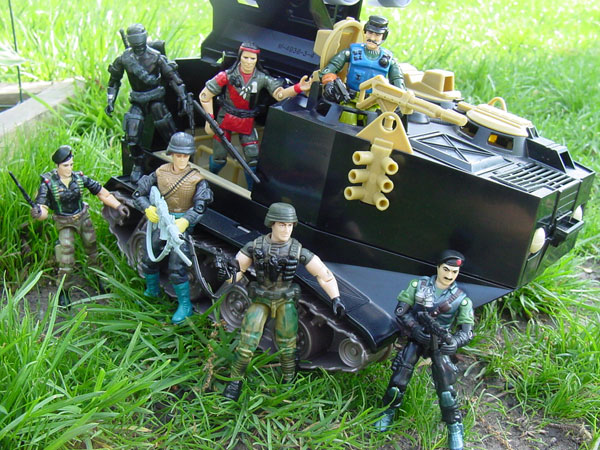 Posted by Robot_Sonic at 3:27 PM
Email ThisBlogThis!Share to TwitterShare to FacebookShare to Pinterest
Labels: 2001, ARAHC, Duke