The original Joes hold a soft spot in my collection.  They were the first Joes I ever owned and were the gateway into my adult hobby.  While I really hold the 1983 figures as the true impetus that drove my collecting, it was the groundwork laid by the original 13 that allowed that to happen.  As such, as I've gotten older, I have grown more fond of the original Joes.  They have a lot of issues and feature many things that I find to be detriments to later figures.  But, when taken within the context of their release, these shortcomings are much more forgivable.  However, due to the similarities between so many of the figures, I truly appreciate those which deviated the most from the formula of the first figures.  Rock and Roll is a perfect example of a figure who uses unique parts and existing parts to create a lasting character.

The original 13 Joes, when taken as part of the overall line with over 1,000 ARAH style figures, have limitations.  The reuse of parts steals away some semblance of originality.  The molds are detailed, but not nearly to the extent of even the 1983 figures who came the next year.  The colors are mostly the same and lack the contrast that came in later times.  But, when taken as a group, these figures have a panache that is hard to match.  The flow of color gives them the appearance of a team.  The diverse specialties also define the individuality that can be lost with reuse of parts and colors.  In short, the group works because they were first.  Had this set of figures been released in 1984, the line would have suffered greatly.  But, by coming first, they set a bar for what the Joe line was going to be.  This allowed the figures in subsequent years to surpass these first figures in terms of mold, paint and accessories, but not to a point where the originals were useless.  If you look at modern toys lines, the first waves of figures are quickly dated to the point where they are useless.  (You can't give away the first 5 years worth of Star Wars re-releases these day since the figures produced since they are just light years better.)  In the Joe line, you see a progression.  It is hard to use '82/'83 figures alongside those from 1994 in some cases.  But, the two lines do not appear to be either completely unrelated or redesigned with a whole new sculpting methodology.  It is this continuity in design that has allowed the vintage Joe line to remain as relevant to me know as it was when I was first buying them in stores.

Rock and Roll sports a unique chest mold.  He joins Clutch, Steeler and Scarlett as the 4 original figures to have that distinction.  In this case, Rock and Roll's chest helps define his speciality.  The bullet straps might not be overly practical, but the quickly convey Rock and Roll's specialty has a machine gunner.  The bold golden paint drives home this detail all the more.  Beyond that, Rock and Roll is shared parts from the rest of the original figures.  Not even his blonde hair is unique as Short Fuze and Hawk share the color.  His M-60, though, is amazing.  The weapon is greatly detailed.  The inclusion of the bi-pod was both a feat of engineering, but also an attention to detail that no other military toy line of the time was able to capture.  To this day, the original M-60 is my weapon of choice for this figure, his 1989 version and Repeater.  It is enduring and one of the iconic weapons of the early Joe years.

This was the reason why Rock and Roll never played much of a part of my childhood collection.  I know that my younger brother had a straight arm figure.  But, I never managed to get a swivel arm figure until very late in the year in 1988.  Between that time, I never had much use for the figure.  Roadblock was a more effective heavy machine gunner (though the comic tried to differentiate them by saying Roadblock was the heavy machine gunner and Rock and Roll the "light" machine gunner.) and really kept me from ever needing Rock and Roll's speciality.  I still enjoyed the character in the comic, but really had no need for the figure.  This changed with the release of the 1989 Rock and Roll figure as I found that a perfect update.  But, that was the time I was out of Joe toy buying and is story for another time.

The Rock and Roll mold was a world traveler.  It was used for unique Rock and Roll figures in Brazil, Mexico and Argentina.  The chest was used for the Argentine exclusive Shimik figure as well.  The swivel arm figure appeared in the US, Europe and Japan.  But, sometime during this run of releases, the mold disappeared.  In 1997, Hasbro intended Rock and Roll to appear in the ill fated Stars and Stripes set.  But, the mold was MIA.  It never appeared again.  On some levels, that's too bad as this is a character where a repaint could have been very well done.  But, really, Hasbro did very little innovative with the original 13 molds that were at their disposal.  So, even if the mold had been used, it's unlikely it would have created an enduring figure.  The result would have more likely been akin to the 1997 Grunt than the 2002 Toy Fair Scarlett.

Rock and Roll figures are surprisingly cheap when you consider that his brown eyebrows are easy to scuff, the gold paint on his ammo belts and pouches wears easily and he included the smallest accessory of the vintage run with the bi-pod from the M-60.  Truthfully, mint and complete Rock and Roll figures should be a lot more expensive then they are.  Mint and complete, Rock and Rolls can be had for $15-$18.  That price seems to be steady regardless of the figure being swivel arm or straight arm.  But, for a figure of this quality and with these characteristics, it's a price I find to be well worth the quality it will acquire.  Rock and Roll isn't my favorite figure from the original 13.  But, he is in the top 4 and is a figure with whom's absence I would not consider my collection complete. 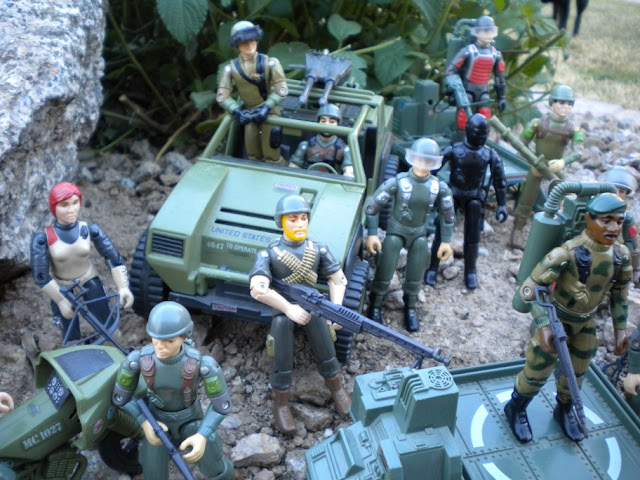 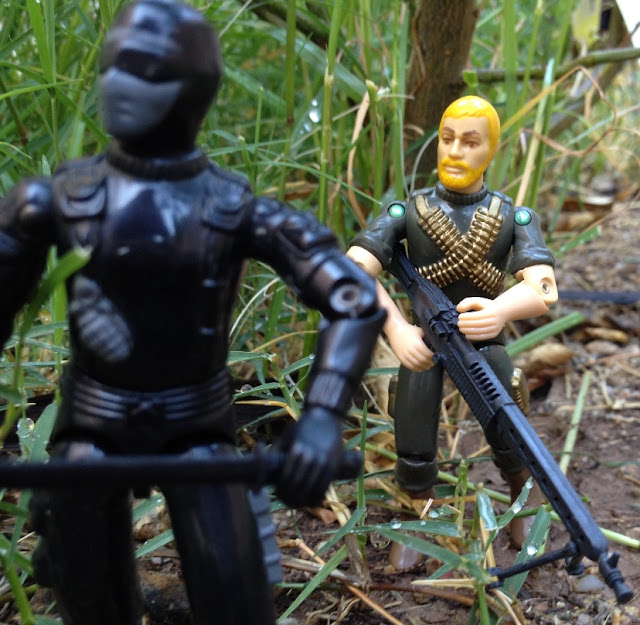 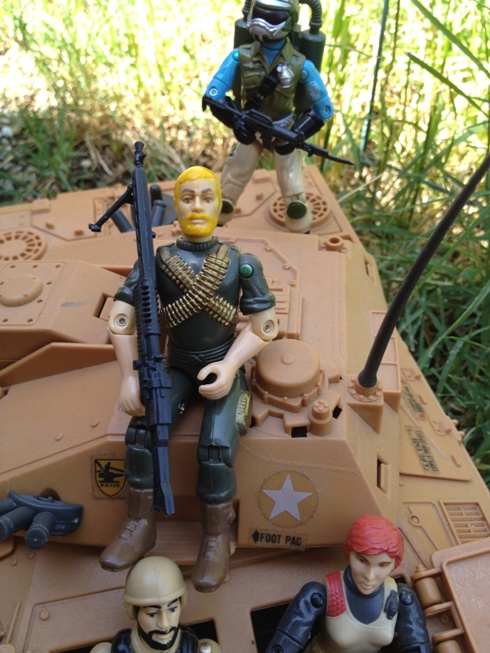 Posted by Robot_Sonic at 10:42 AM
Email ThisBlogThis!Share to TwitterShare to FacebookShare to Pinterest
Labels: 1982, 1983, Original 13, Rock and Roll