As a release year, 1987 is both spectacular and rather terrible. There is a huge dichotomy between some figures that are timeless classics like Falcon or Outback and some that are genuinely terrible designs like Raptor. In between, though, are a third group of figures. These are relatively minor characters whose figures are good, but not great. Some of these figures, like Fast Draw and Sneek Peek, fit into specialized niches. Others, like Croc Master and Big Boa, were interesting character ideas that never really took off. And then, there is the Crazylegs figure. Ostensibly, this is a character that should have been popular. He was a paratrooper, included paratrooper gear and had a decent sculpt. But, a poor coloring choice has somewhat doomed the figure to obscurity.

My first encounter with Craylegs was on the back of the 1987 cardbacks. As a paratrooper, he looked pretty cool. I hoped he would include a parachute and air mask much like Ripcord. Based on the card art showing him in freefall, I even hoped he would include a working parachute. In the late spring of 1987, my father took my younger brother and I to a Children's Palace store on Shadeland Ave. in Indianapolis. (Eerily enough, in the early 2000's, the building was still there, vacant, with a faint outline of the Children's Palace sign on the facade...a ghost reminding me of what had once been.) They had a full complement of Joe figures I had not yet found at retail. I grabbed the Crazylegs figure and looked him over. However, after seeing him in the full red glory with no air mask, my interest in the figure dropped considerably. I gave him to my younger brother and bought myself a different figure. (I can't recall who I got, but remember the disappointment of Crazylegs.)

Crazylegs simply got no use when I was a kid. The red color did not fit with the Tomahawk or Dragonfly and was difficult to use in combat situations. Even my beat up Ripcord and Airborne figures were better choices for airborne assault troopers. (Especially since the green Ripcord gear that worked so well on Airborne was a huge color clash with Crazylegs and did not fit over his bulkier mold.) So, Crazylegs became part of a legion of "no-name" characters who would randomly die in attacks on Joe bases, civilian outposts or Cobra encampments. He saw some use in that capacity for a while, but then faded away into the bottom of my figure box.

In the mid 1990's, I finally found a niche for the Crazylegs figure. The heavy suit could be construed as armor. The red color, was suitable for a jailer. So, Crazylegs filled a role I termed Sessions Officer. Basically, the Sessions Officer's job was to sit in session with a prisoner accused of a capital crime. It was the Sessions Officer's duty to ensure that prisoner lived to see trial and, if convicted, survived to be placed into his prison cell where he would await death. Sessions Officers were among the most highly trained and respected officers around and many would, eventually, go on to fine careers as senior combat officers, politicians or heads of corporations. But, when the Dreadnoks tried to free one of their members who was heading to death row, the Sessions Officer had to put his life on the line to ensure the prisoner was not freed and was not killed by his compatriots. (One of the Sessions Officer's last duties, though, was to ensure the prisoner did not escape. So, the Sessions Officer was authorized to kill his ward...provided that escape was ensured and all other options had failed.) I acquired multiple Crazylegs figures to fill this specialty. It was a fun diversion for a while. But, eventually, Crazylegs faded away again. He now stands as little more than display piece with the Night Force version being the figure of choice should I want the character to appear in photos.

As a mold, Crazylegs is remarkably well detailed. The airborne suit is bulky and detailed with quilts that look like a suit that would be worn when jumping from high altitudes. The molded helmet on the head is nicely scaled and fits with the overall look of the figure. The sculpted goggles and chin strap are nice adornments to accompany the grenades and knife that are molded to the figure's chest. The overall figure, though, isn't painted with great detail. Basically, the figure is just four colors: red, black, grey and a splash of tan on the figure's gloves. In comparison with other 1987 figures, the paint masks on Crazylegs are rather lacking and he looks more like a 1988 release due to the simplicity of the paint applications.

While Crazylegs' accessories were a disappointment to me, they aren't terrible. The parachute pack is very well detailed. The notion of having it wrap around the figure's legs was a neat idea that just didn't translate into the actual toy. Hanging on the wall of a flight deck or Tomahawk, the chute can be useful. But, attached to the figure, it's hard to make it work. Crazylegs' rifle included a folding, removable stock. This was the first such attempt in the vintage line. Again, it is a nice feature that gives Crazylegs some character. But, as an actual toy, the removable stock doesn't really add anything. As a kid, though, I always felt that Crazylegs' rifle was as close a representation to the Cobra rifles from the cartoon as we would see in the toy line. As such, I co-opted his rifle for various Cobras throughout my childhood. Later, the gun became a staple with figures like Sneek Peek as it just seemed to fit those figures well.

The Crazylegs mold is one of the most used in the world. It is likely that right after this figure was released in 1988, the mold went to South America. There, Crazylegs was released in Brazil and then again in almost concurrent succession in Argentina. (Crazylegs was the only post 1985 figure mold to be released in Argentina.) Both these figures were named Alado and are, basically, identical to the American Crazylegs figure. In an odd bit of timing, though, Crazylegs then appeared in India. Again, basically colored the same as the American figure, the main distinction for this Crazylegs figure is the red parachute. However, Crazylegs' head was also used by Funskool of the so-terrible-he's-cool Skydiver figure. So, Crazylegs fans have a lot of figures to track to down. But, the foreign variants are all, essentially, slight deviations from the American figure and don't really offer anything greatly new for the character. The Crazylegs mold was not among those recalled from Funskool by Hasbro in the early 2000's. That is too bad as the mold could have been a great candidate for repaints in jungle, desert or even arctic themes.

Crazylegs figures are neither hard to find nor expensive. The rifle stock can be problematic to find. But, it's not at rare as many other accessories. Being a 1987 release, Crazylegs figures can be susceptible to cracked elbows. But, finding a mint figure is still fairly easy. Mint and complete with filecard versions run in the $8-$9 range. That's a fair price for the figure. He's not as expensive as the more popular characters and is more expensive than the dregs of 1987. As a paratrooper, and a figure in general, the 1988 Night Force release is the definitive version and should be the choice if you only have one Crazylegs figure in your collection. But, this original figure has some charm due to the classic release year and does fit into a display with his contemporaries. For under $10 that's not a terrible purchase since the figure is a good way to add some visual diversity to the colors of your Joe characters. 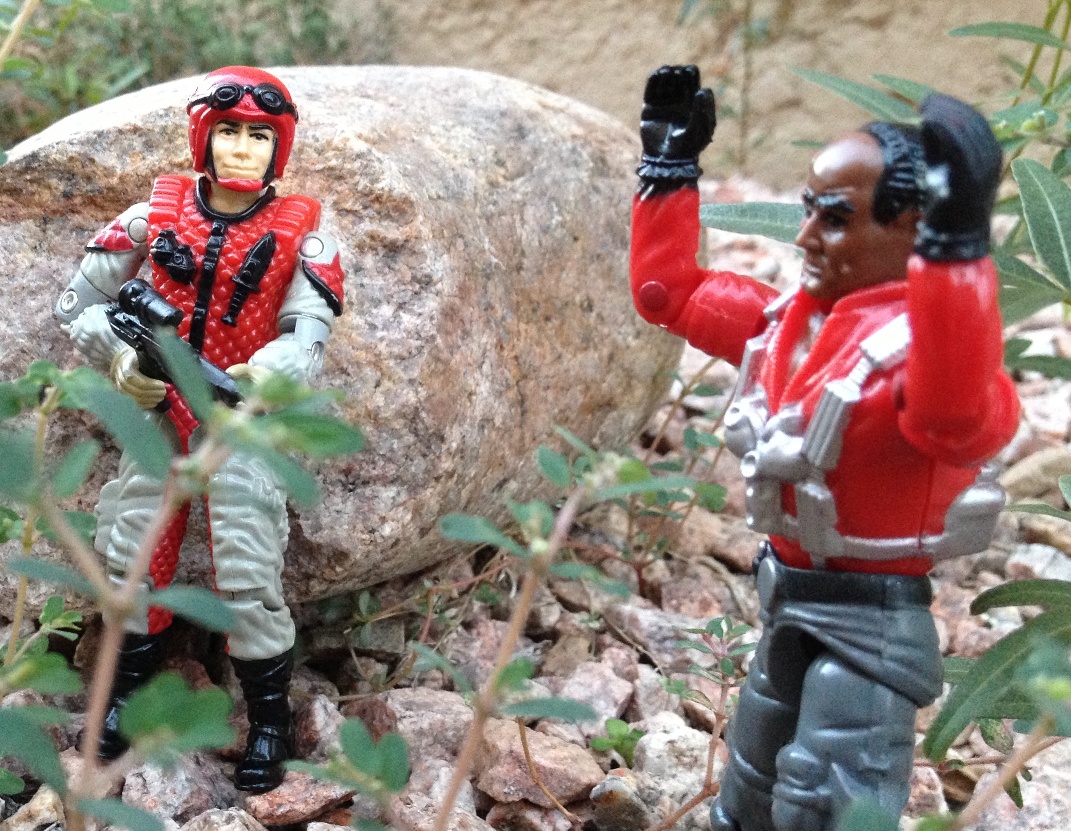 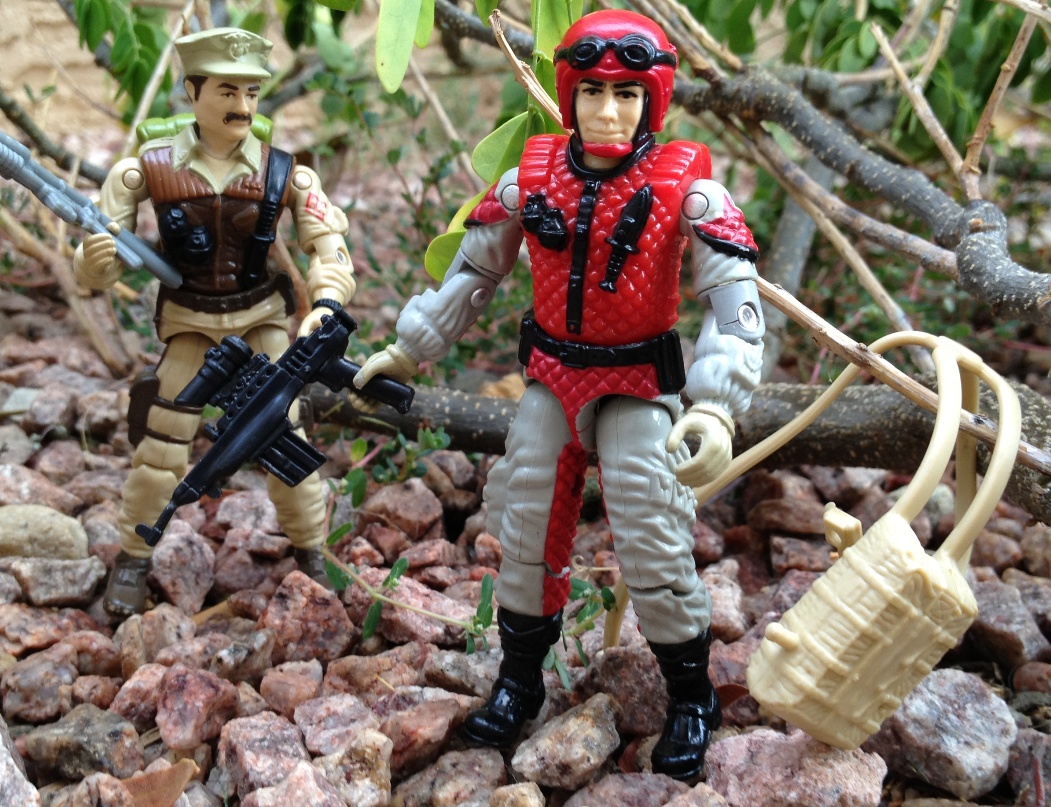 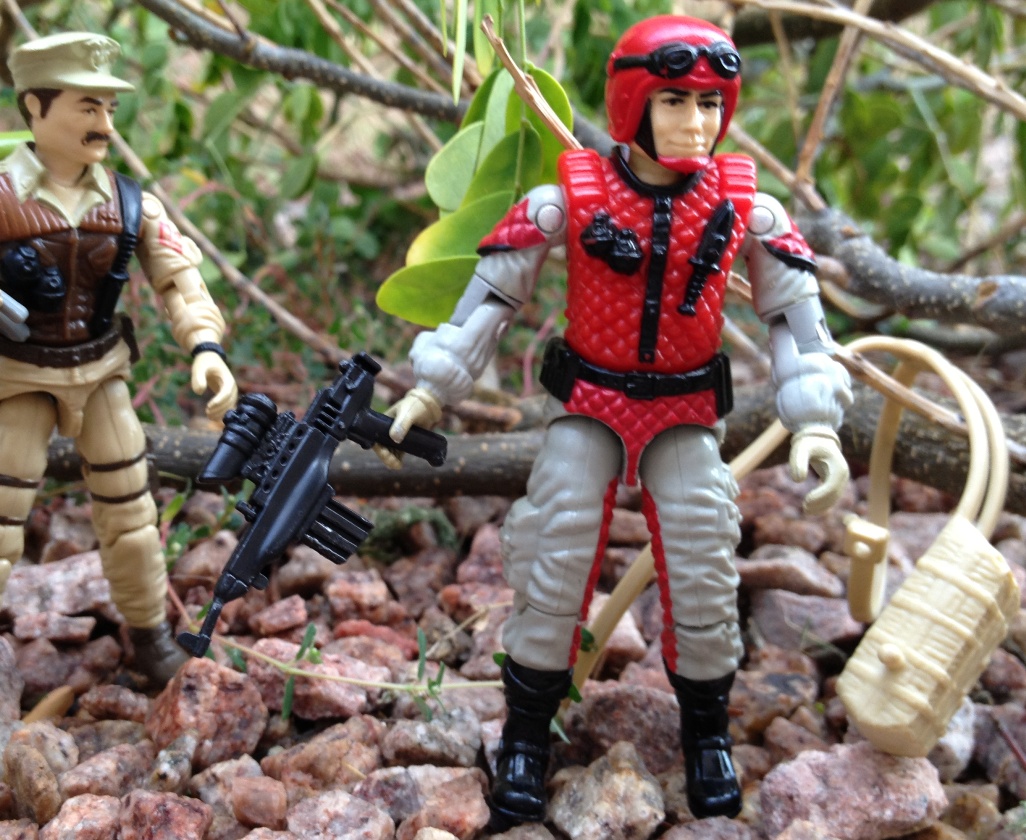 Posted by Robot_Sonic at 10:38 AM
Email ThisBlogThis!Share to TwitterShare to FacebookShare to Pinterest
Labels: 1987, Crazylegs