In the first three years of the Joe line, there were a good number of figure releases.  Not too many as to be overwhelming.  But, enough that a child could always get something new no matter what time the year.  (Unless you were of generous parents who just bought it all at once and gave one massive gift every year....)  In my childhood, the progression always seemed to be the acquisition of carded figures first through the school year and then transitioning into vehicles as the summer season started.  This was likely the function of me having more money in the summer to buy my own vehicles.  But, I have few recollections of seeing the vehicles from any given year in the stores as early as I found the figures.  (This was probably due to the seasonality of ordering where stores weren't going to buy expensive vehicles in January to have them sit on the shelf until December.  They could sell just as many by getting them in June.)  This has lead to the bulk of my new vehicle memories being focused outside in the summer.  1984 was no exception.  I had most of the figures early in the year, but started getting vehicles later.  Just before a summer trip to see my grandparents, my younger brother was given the Slugger.  While this vehicle left me somewhat cold, I thought the driver was cool.  This brought Thunder into my collection.

When my brother opened his Slugger, he found something that occurred from time to time in the vintage line.  His Thunder figure was damaged out of the box.  The screw hole was broken.  As such, Thunder fell apart right out of the bubble.  My father, though, had a solution.  He re-drilled the hole in Thunder's back and replaced the screw with one that was much larger.  The benefit was that Thunder was whole and could be used again.  The drawback is that he could not wear a backpack and he had the stigma of imperfection that bothered me even as a child. As such, this prevented Thunder from being a major player in my childhood collection. Rather than get a full characterization, Thunder was left relatively untouched and was even a character who could die from time to time since I had no real attachment to him.

Around 1986, though, another Thunder figure came into our childhood collection. Finally having a nicely conditioned version allowed me to use the figure more freely. Thunder quickly found a home as a generic Joe driver. He helmed the APC, would join Tollbooth on the Bridge Layer, man a gun turret on the WHALE or, most commonly, ride shotgun in the Mauler. This Thunder, though, still wasn't much of a character. Mostly, he remained a figure who was a Joe army builder. He might have a major role, or he might perish on any given mission. The figure was cool enough to warrant use. But, the damage from that original figure out the box prevented Thunder from ever attaining the characterization that made figures important to me.

The Thunder mold is extremely well done. The head is greatly detailed with a chiseled facial expression. The body has layers of armor and protective gear that driving a tank would necessitate. The figure is colored remarkably well. The hues of brown and green are a great combination that tie Thunder the line's roots, but give more character than was seen in the first wave of figures. The mold is full of painted details, from belt loops to the chest holster and buckles for his chest harness. Thunder is a richly textured figure that shows the level of detail Hasbro was willing to put into even vehicle drivers whose vehicles allowed them to be completely hidden from view. In the line's first few years, there was no real differentiation between a vehicle driver and carded figure except for the quantity of accessories. In time, that changed. But, Thunder is a great example of Hasbro's dedication to the line and their commitment to quality in those beginning waves of toys.

That quality serves Thunder well today. The figure is a staple of my vehicle driving corps and can be most often seen in the HAVOC or Mauler. The strong colors and great mold make for a figure that is perfect background fodder for dioramas or manning secondary stations on many classic vehicles. Thunder has the complexity that makes for a visually appealing member of a collection along with the simplicity that blends him perfectly together with figures from 1982 - 1984. His accessories give him personality that allows him to extend beyond the limited role of Slugger driver and into a more ubiquitous job as a general vehicle driver. This versatility makes the figure that much better and helps to expand the Joe ranks without straying too far from the norms of the time.

The 1984 Joes seem to be split into two camps.  The first group includes Thunder as well as Duke and Roadblock.  These three figures seem like they are just an extension of the 1983 line.  They use the standard helmet from 1982 and have scale and details that make them more akin to the 1983 releases.  (Which makes sense for Duke as he was released in late 1983 via the mail away offer.)  The rest of the carded '84 lineup (Spirit, Blowtorch, Mutt, etc.) seem like they benefited from the lessons learned in 1982 and 1983 and featured beefier sculpts with greater detail as well as accessories that were more custom tailored to their individual figures.  It could be that the first group was just a cost saving measure meant to squeeze a bit more life out of the earlier designs.  But, we do know that Hasbro was designing figures very early on (The 1983 Destro artwork is dated 1981.) and it's possible that Thunder was a holdover from an earlier design.  Whatever the story, it is an interesting view into the yearly transitions Joe made as the line evolved.

Thunder was given decent accessories.  While he included the standard 1982 helmet, Hasbro went a step further to give him new headgear.  In lieu of the played out visor, Thunder was equipped with menacing black "goggles" and earmuffs to shield his hearing from the Slugger's massive weapon's noise.  As if that weren't enough, he was also given a field monocular glass to target his quarry.  (To make up for the fact that my Thunder was broken out of the box, he actually included 2 monoculars.  Pure coincidence, but something I recall.)  All of this allowed Thunder to be more than many other vehicle drivers since he had accessories that matched his specialty. (It should be noted that Thunder's goggles are not the same as were included with Starduster. There are dealers who often confuse the two. Thunder's goggles only work when applied with the headgear as well. Though, in the old days of Joe, it was not uncommon to find a Thunder figure with Starduster's visor. Those were great finds!)

The Thunder mold was infrequently used.  After this figure's retail run was done in 1985, though, Thunder continued on as a mail away for most of the rest of the vintage line's run.  In 1988, Thunder's head and accessories were used on the Tiger Force Skystriker figure.  After that, the entire mold was repainted in green and released as Thunderwing the MOBAT driver in 1998 and again in 2000.  After that, the figure disappeared.  (Though his arms would make appearances from time to time on various figures.)  I would have liked to have seen Hasbro use the body mold with a Cobra Trooper or Hiss Driver head to make up a new Cobra vehicle driver later in the line.  But, thinking like that was gone by the time Hasbro could have done it.  But, Thunder exists in two high quality figures.  So, you can't say that mold was squandered.

Thunder figures aren't too hard to find.  But, mint and complete versions have gotten somewhat pricey in recent years.  You will see mint and complete with filecard figures sell upwards of $20 from time to time.  But, Thunder was available for a long time via mail aways.  And, he was one of the filler figures that was sent to collectors from Hasbro Canada in 1999 as a replacement for any other figure you ordered who was now out of stock.  So, there are lots of them out there. As a figure, Thunder is very high quality and he looks good as second fiddle in a variety of vehicles. That is versatility that is worth adding to any collection. 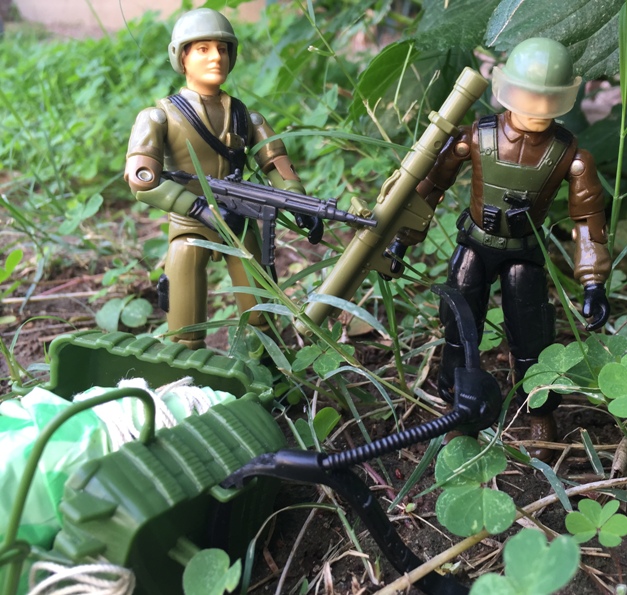 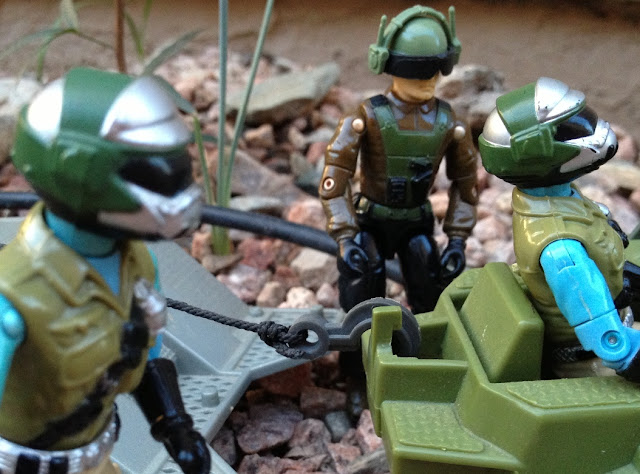 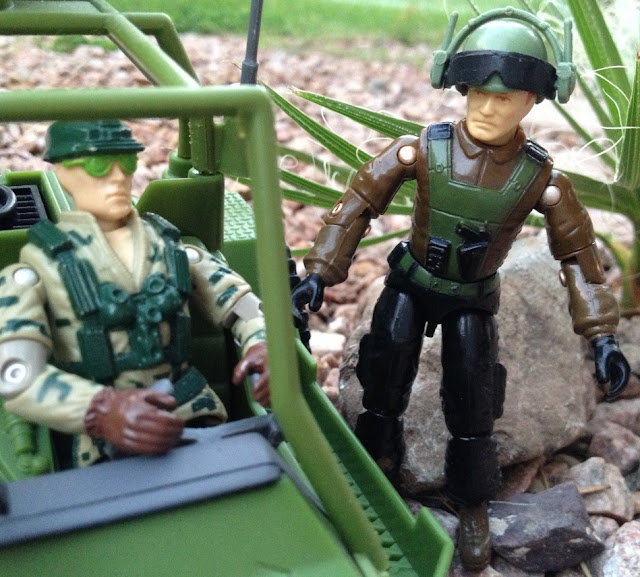 Posted by Robot_Sonic at 10:41 AM
Email ThisBlogThis!Share to TwitterShare to FacebookShare to Pinterest
Labels: 1984, Slugger, Thunder