If you were a G.I. Joe collector in 2002, you know how army building crazy the community was.  Starting in 2001, Joe collectors were simply starving for any retail army builders.  Figures that weren't great would get purchased in bulk just because collectors wanted to army build something.  It was an almost unhealthy obsession.  But, Hasbro of the time did us no favors.  The army builders of 2001 were not great and were often packed with lackluster Cobra character repaints.  No one wanted 20 Major Bludds, Destros or terrible Zartans.  They wanted Vipers, Bats and Troopers.  But, for some reason, Hasbro was loathe to release any of those collector demanded entities.

In late 2001, Hasbro released the prototypes of the New Sculpt Joes that would debut in 2002.  Collectors immediately hated them.  The odd proportions and lack of o-ring doomed them to obscurity.  Hasbro, somehow surprised by the backlash, quickly went back to the drawing board to retro fit later new sculpt molds to include the o-ring.  But, doing so delayed their release.  Hasbro needed something to fill the retail void since Joes were actually decent selling toys back then.  They also actually wanted to do something for collectors to appease them and give the new line a chance later.  So, Hasbro came up with Wave 1.5.  It was a set of 4 vintage Joe packs that were meant to bring some fan favorite molds to production.  The set included General Tomahawk/Headman, Sure Fire/Slice, Mirage/Cobra Viper and Big Ben/Alley Viper.  Sure Fire and General Tomahawk were meant to the be the 1988 Shockwave and 1986 Hawk as a favor to fans who cherished those molds.  But, the tooling was not found and later, less popular molds were used.  The Viper and Alley Viper, though, were Hasbro's way of giving collectors army builders to amass in unforetold numbers.  And, despite their insistence at packing the army builders with Joe characters, it worked.

Collectors immediately went bananas over the retail army builders: buying them in droves and clearing out any retailer who had ample stock.  (The first shipments appeared at Wal Mart and they stocked several cases at once.  My local store had so many that there were boxes stacked on the tops of the shelves and half opened boxes on the lower shelves in addition to the full pegs.)  Collectors quickly posted photos of 10, 20, 50, even 100 Alley Viper and Vipers to showcase their support for these figures.  One thing the army building craze did, though, was obscure the fact that not all the army building figures of the era were winners.  Starved collectors would buy multiples of any figure with "Viper" as part of the name.  So, it was difficult to tell the stinkers from the gems since everything disappeared quickly.  In the 15 years since this time, though, winners and losers have appeared.  The green Viper from this wave is relatively forgotten and unloved.  His Alley Viper companion release, though, has found greater popularity and remained a stalwart of many Cobra armies.

The reason for this is that the figure is well done.  While the parts aren't ideal and remain a source of ire to this day, the overall body design isn't terrible.  It's better than the kit bash Hasbro concocted for the Viper, though not by much.  The colors are subtle.  The base blue is a bit light for classic Cobra.  But, it's also OK.  It fits with many Cobras of the era and even earlier without being too derivative.  The grey, white, black and silver details are subdued and give the figure texture without taking away too much from the base color.  In short, this is a good, solid Cobra who works with established Cobra colors.  His gear is pretty much great since you get the face shield (which is less prone to breakage with the softer plastic of the 2000's), a good enough Big Bear backpack and the Cobra hand held shield.  The weapon choice is bad, though, since he includes a Tomax/Xamot pistol instead of the AK-47 that was so common at the time.  Fortunately, it was easy to get better accessories for these figures from the superfluous overstock of figures who were packed with army builders.

Wave 1.5 is one of the most overproduced waves in the post vintage history of the line.  When the wave first appeared, it showed up en masse at retailers around the U.S.  There was regional lag and any collector who was plugged into the community was quickly able to find the wave as it appeared.  But, then, it continued appearing.  As the summer moved on, retailers stocked more and more of the wave.  It sold well enough since collectors loved the Viper and Alley Viper.  But, it kept coming.  In the fall, bonus packs of the figures began to show up at K Mart.  They included one of the 2 packs from the wave along with a third, bonus figure: also from the wave.  Then, the wave began to show up at discount and other non-traditional retail outlets.  Into 2003, the Wave continued to appear at odd places.  A large volume of the cases were actually shipped to Israel for pennies on the dollar and Israeli toy dealers were able to sell some figures to Americans for cheaper than they could buy the figures at retail.  Into 2004, the wave continued to ship to places like Dollar General Stores: who had to discount the two packs to $1 each to move them.  There was just so much of the product that Hasbro struggled to get rid of it.  And, as the Joe line was dying out in that retail incarnation, the wave became a bit of a target for collector frustrations since it was so overproduced and collectors were drowning in oceans of Big Ben and Mirage figures.

This configuration of the Alley Viper first appeared in 1997.  In 2002, this blue version was released and, later in the year, a red repaint was packed one per case.  In 2003, the mold was colored in brighter blue and released with a repainted Viper in the infamous wave 7.75 "Army Builder Wave" that came and went from retail in the blur that was G.I. Joe sales in the 2nd half of 2003.  The figure was planned as part of a Wal Mart exclusive Sky Patrol themed set for late 2003 but the entire concept was cancelled.  The unproduced figures are relatively available, though, as tons of stock were sold by Asian Joe sellers.  The final appearance of the figure was the all black version in the 2004 Toys R Us exclusive Urban Strike set.  The mold never appeared again.  However, collectors had gotten a bit burned out by so many releases of the Alley Viper in short succession.  So, his absence after 2004 was never really an issue: especially since pretty much all 5 of the paint jobs for this parts combo are well done and generally liked by collectors.

This version of the Alley Viper, despite his availability, has actually maintained some value in the past 15 years.  Mint and complete figures generally sell in the $8 range.  You can get carded versions for $11 or so, showing how worthless the Big Ben figure in the 2-pack really is.  Dealers will sometimes price him in the $15 - $20 range and sell a couple, too.  But, $8 is more common and a little patience will yield you a figure at that price.  But, getting an army of these guys will take some time.  They are not nearly as available as you would think.  It seems that many collectors who built armies of this figure have kept them and are not into liquidating their excess versions.  But, when you look at the combination of mold quality, figure colors, included accessories and general availability, you can see why this figure has become one of the more sought after army builders of the era.

When I liquidated the majority of my collection, this version of the Alley Viper stayed.  I had a few of them.  But, I also had armies of several other versions of the character.  I consider the 1997 version the best and kept all of those.  But, I also held on to this version.  Part of that is because of the time in which I sold my collection.  Back then, this figure was still relatively worthless.  And, I didn't feel the paltry sum of money I'd get for them would be enough to offset their quality.  The other part, though, is that I just kind of like this figure.  He's a neat design and decently colored.  In 2002, I had more of him than any other Alley Viper so he was my default version.  That nostalgia helped him, too.  Now, I'm happy to have retained these figures. They are a nice way to use the Alley Viper character and give me another option from the 1997 releases. 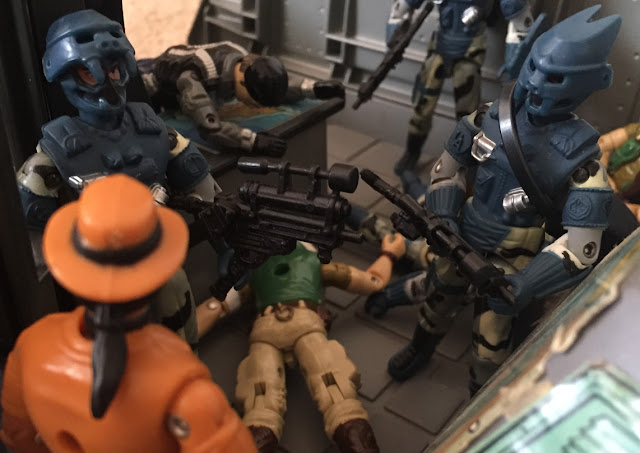 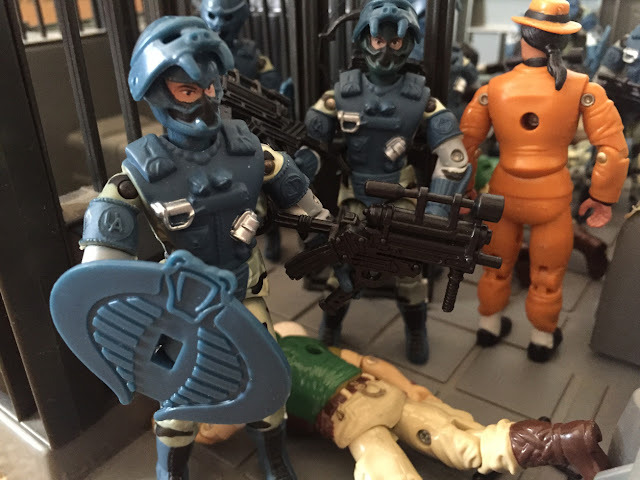 Posted by Robot_Sonic at 1:56 AM
Email ThisBlogThis!Share to TwitterShare to FacebookShare to Pinterest
Labels: 2002, Alley Viper