As a kid, the Skyhawk didn't, initially, click with me.  My younger brother acquired one in the latter half of 1984 and the toy simply didn't seem all the interesting to me.  I had a Skystriker that was still in decent enough shape.  And, the Dragonfly was still going strong.  On the Cobra side, though, I had few, if any aircraft.  So, my play pretty much all centered around ground and naval adventures.  Aircraft simply didn't see a lot of time.  Slowly, my brother broke his Skyhawk apart and it was relegated to the junk box in our toy room.  In late 1986, though, this changed.  First, my youngest brother acquired the magnificent Cobra Night Raven.  While the plane was awesome, it was also overly large.  But, the drone that attached to the back was the perfect size for what I wanted from a Cobra aircraft.  This weapon gave Cobra air superiority.  Around the same time, though, my younger brother also acquired the Sears Dreadnok Air Assault set that included a repainted Skyhawk.

I was never big on Joe vehicles becoming Cobra.  I liked each group to have its own equipment.  So, the Dreadnok Skyhawk was quickly requisitioned to Joe and became my default Joe aircraft.  It was the perfect size to battle drones.  In early 1987, I was given a new, original, Skyhawk when I acquired a collection from the kids down the street.  This joined my Dreadnok version and the Skyhawks became more specialized: the Dreadnok version was the aquatic version while the original was the "land" version of the vehicle.

For the remainder of my childhood play, the Skyhawk's dominated my aerial combat missions.  Usually, they were piloted by my Silver Pads Grand Slam who wore a Lifeline Airmask.  The pilot and vehicle were army builders and would routinely be shot down by Cobra's top notch Strato Vipers behind the helm of a drone.  (In my final days of play in late 1987, the Mamba drones joined with the Night Raven drones against the Joes.  The Mamba drones had better weapons.  And, there were two of them!)  There were dogfights, undersea rescues of a downed pilot and horrible crashes that resulted in long term plot devices.  In short, the Skyhawks were integral to my final years' Joe experience.  Of course, this resulted in both version of the Skyhawk taking a beating.  I put them away with the rest of my Joe toys in early 1988.  But, as both aircraft had been integral to my adventures, I often found my youngest brother would take them from my storage place and play with them.  The result was two battered toys.

In the late 1990's, when I started to rebuild my Joe collection, I found the old Skyhawks.  But, the old designs didn't hold as much sway as they had used to.  By that time, I owned a Razorblade helicopter and it more adequately filled the role of small Joe attack aircraft that I wanted.  But, the dilapidated condition of the original Skyhawks was bothersome to me.  So, they were just left in boxes and didn't really matter much, anymore. The husks of the vehicles were moved around and, eventually, parted out to other collectors.

I paid the Skyhawk little attention until the spring of 1999 when it became known that Hasbro Canada still had a massive amount of overstock Joe mail away toys from the early 1990's.  Among the items you could purchase were both the Cobra Firebat and the Skyhawk.  For a couple of bucks each, I couldn't pass these items by.  I ordered only around 20 or so figures from the find.  But, I picked up two each of the Firebat and Skyhawk.  Upon receiving them, it was obvious that the Firebat was the brighter, mail away version.  When I looked at the Skyhawk, it appeared it was also the mail away version.  But, I paid this little mind.  I had a new Skyhawk and it took a place of prominence in my collection.

In the summer of 2000, I stumbled into one of those deals that every collector tells you about but never seems to happen to you.  A guy posted to the Joe Usenet newsgroup that he had a collection he wanted to get rid of.  I was the first to respond.  He said to send him my address and, once I got the toys, simply reimburse him for shipping.  I figured it was no risk and I'd get a few, beat up items.  About a week later, I came home to three huge boxes that were blocking my front door.  Upon opening them, I found nearly an entire collection of 1983 to 1985 figures and vehicles, mostly in mint condition.  I quickly wrote a check for $40 to cover the shipping, thanked the former owner and marveled in the fact that my collection had exploded.  I hadn't been too keen on vehicles since I had been living in apartments and moving frequently at the time.  But, this new collection coincided with the fact I had recently purchased my first home and had some room to store and display toys.  As I took all the goodies out, I found a mint and complete Skyhawk.  I set it up on a shelf next to the one from Hasbro Canada and, for the first time, noticed the stark differences between the retail and mail away versions of the vehicle.

The mail away Skyhawk is a much richer and deeper green color.  The retail version is more olive drab.  In terms of realism, the original is probably more in line with the traditional military colors of the early Joe vehicles.  But, the darker green of the mail away is much more visually pleasing to me.  I'm a sucker for the color I call "Brazilian Green".  It's a dark, vibrant green color that appears on the accessories included with many Joes from the Brazilian Comandos Em Acao line from Brazil.  Estrela used the color on pretty much every green accessory they released.  And, as this mail away Skyhawk was made in Brazil, too, it features the dark green color that I so enjoy.

Aside form the color, the black missiles, engines and skids are a slightly different shade of charcoal and appear slightly more glossy than the American, retail versions.  The other main difference is that the Hasbro copyright markings on the inside of the cockpit have been removed.  (See the photos below for details.)  Estrela did this on most of the early releases.  The first waves of figures made in Brazil had the production stamps altered to reflect the toys were made in Brazil.  As the line wore on, this was less common.  I'm not sure why they would do this.  But, Funskool in India altered molds similarly, all they way through their final figure releases.

As a toy, the Skyhawk isn't bad.  It's not very large and holds just one figure in the cockpit.  Even some 1984 figures are too large to fit in there, though.  You can place two figures on the skids.  It's a decent feature that was kind of fun as a kid.  But, the practicality of such a feature is rather ludicrous.  The aircraft features two missiles and a swiveling chin gun.  It's a nice amount of armament for a vehicle this size.  There are also two smaller cannons molded into the sides of the vehicle.  As a kid, these were incendiary rounds that would turn a Cobra drone into a fireball instead of a dying bird as it fell from the sky.  For Cobras who wore parachutes, the fireball was a psychological deterrent.  Outside of that, the removable wings give the toy some visual appeal.  But, they also cause a great many wings to be missing from wild Skyhawks.  In short, it's a great, low price point vehicle from a time when Hasbro really tried to have toys available for every budget.

Original Sky Hawks are easy to find and relatively cheap.  You can get mint and complete versions of them for around $11.00.  Dealers, though, will often ask for at least $25 and sometimes even more.  The mail away version, though, is much harder to find.  Properly labeled, the mail away versions will sell in the $40 range.  But, as many collectors won't recognize the color differences, you can find mislabeled mail away Sky Hawks with a little looking and get them for a bargain.  You see collector interest in mail away vehicles wax and wane over the years.  And, something that's really hard to find and expensive today may drop in price and be relatively easy to find tomorrow.  The huge amount of mail away Skyhawks released into the collecting community through the Hasbro Canada find helps to sate demand and has made this variant much easier to find that if they were only available through those who acquired one as kids.

For me, either version works just fine.  If I hadn't gotten the mail away version in the manner that I did, it's doubtful I'd have tracked one down.  But, as a visual distraction, the mail away version is nice.  I used it with my foreign figures quite often: just for something a little different than you average Joe diorama.  Individual collector value will vary in regards to these items.  If you just want a Skyhawk as a toy, buy the retail version and save money.  But, since you can still find the mail aways from time to time, they are just as good.  The quality is there and the colors are just different enough to be fun.  I've found that the Skyhawk mold is still an excellent complement to the figures from the line's early years.  Now, that's where they see the most use.  It's a far cry from their days as my de facto aircraft.  But, the fact that this mold remains relevant to me after more than 30 years is a testament to it's overall quality. 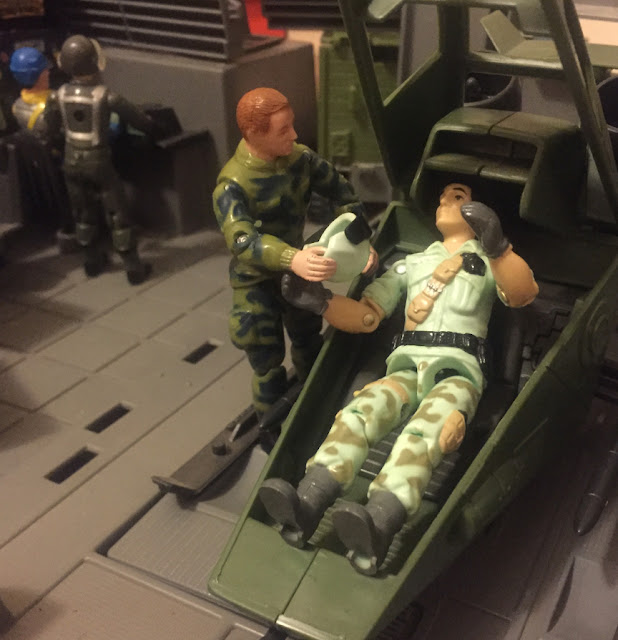 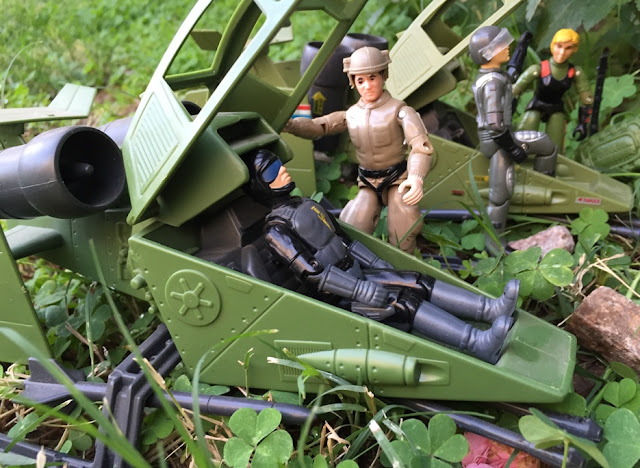 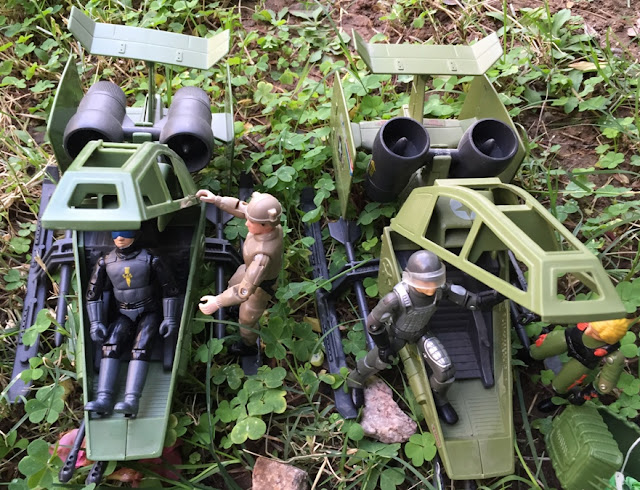 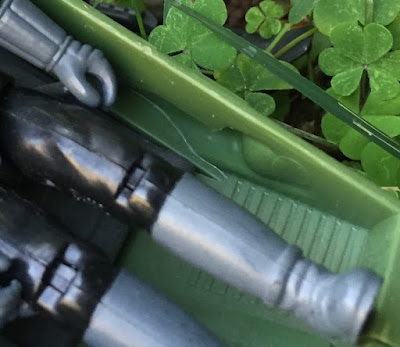 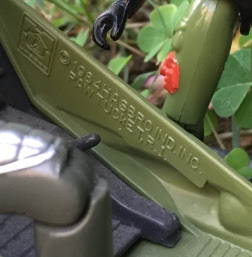 Posted by Robot_Sonic at 2:31 AM
Email ThisBlogThis!Share to TwitterShare to FacebookShare to Pinterest
Labels: 1984, Mail Away, Skyhawk, Vehicles