When I was a kid, I decided that G.I. Joe needed army builders. While we have already explored figures like Recoil and Salvo, they were later additions to my collection. In the mid '80's my army builders for the Joe side were relegated to a custom I frankensteined out of Airborne, Ripcord, and Duke. I decided, though, that I needed an elite unit. The guys I used were cannon fodder. I needed some guys that were the creme de la creme of the enlisted units and were only a solid mission or two away from becoming full fledged Joes. As G.I. Joe Special Missions had just started up, I named them Special Missions Commandos. The figure I used to represent these guys was the 1983 Ace figure. I loved that figure, but didn't like only using him as a pilot. I always thought his uniform made him look like a deep sea diver, so I had taken to using him as such. Since I wanted my Special Missions guys to be able to handle any environment, I naturally turned to Ace. I outfitted him with Torpedo's backpack and Sci Fi's gun. He became the elite unit trooper of which I was so desperately in search. As time progressed, though, I loved the idea of the Special Missions, but Ace was dying a slow death. His joints were all too loose, his crotch broke, and, the final straw, I broke his thumb and he could no longer hold a gun. I kept the concept of the Special Missions alive for many years, but lacked a figure who could fill the role. In 1995, I walked into a discount toy store and found several 1993 Star Brigade figures on clearance for $2.00 each. When I saw Payload, my search for a new Special Missions Commando was over.

This guy is just about perfect. The mold is very basic, but the colors are great. Unlike many of the other Star Brigade figures that utilize light colors or neon, this guy is just green, black, and silver. He can easily be used in combat situations. The minute I got him, he became a crew member on my Sharc 9000. I use him primarily as a deep sea combat diver. While Deep Six is a rescue trooper, this guy is purely combat. I've given him Psyche Out's backpack and the blue pistol that comes with the 1993 Muskrat. It gives him a slight sci fi look without being too over the top. I've also found that the pack from Deep Six or the Hydro Viper also works very well with him. Just about any dark air tank pack and dark weapon look good with this guy. His color scheme is very inviting for most of the Joe accessories that came out in the earlier days of the line. Since dark weapons look so good with him, Hasbro, of course, included a neon pink weapon tree for him. This awesome figure carrying a neon pink gun doesn't do much for his macho image. Muskrat comes with darker versions of Payload's weapon tree so the guns work perfectly. Once properly outfitted, this guy just screams for use. I've spent a good amount of time tracking down multiples just to build my armies. When I can finally get a Defiant, my crew of Payloads will certainly be on the maiden voyage. They work great as divers, pilots, astronauts or combat troops. He is another versatile figure of whom every collection needs many.

Payload is the only 1993 Star Brigade whose color scheme was worse in 1994. All the other re-releases were improvements. Payload, though, has a slight twist to his existence. There are actually 3 Star Brigade versions of him. He came in the black and green trim you see below. He was then re-released in white, red, and blue in 1994. However, sometime in between these two figures, there was a third version made. It is cast in black, but the green trim you see on the figure below is in a dark blue color. Some say this guy was released in 1993 and in 1994. I have found him on 1994 packaging, but have never, ever seen one on 1993 packaging. This is one of the hardest figures to find in the entire run of G.I. Joe figures. He saw a very limited run in a sub series that wasn't all that popular to begin with. I've only seen two of these guys offered loose, but they do appear about once a month or so if you want them carded. The blue trim Payload is one of the most obscure figure variations in the whole line, and is one of the figures many collectors need to complete their collections. In my opinion, though, the black and green version is the best color scheme this mold ever saw. (The same mold was originally cast in red and used for the series 2 Eco Warriors Barbecue in 1992.) The other are good, but the the dark green and black just make a visually pleasing figure to own.

Payload, like all of the 1993 Star Brigade figures, is incredibly easy to find. They came in terrible pink packaging where the G.I. Joe logo was downplayed. As such, most of them found their way to clearance outlets. You can now find them both on the card and loose with great ease and with little expense. (Carded figures, though, tend to have the discount store's price tag still affixed. It is an affliction that affects most of the existing carded samples.) These guys were never popular. The normally articulated '93 Star Brigade figures were readily available at retail well into 1996. The Armor Tech assortment was still available at retail when the Arizona Mills Mall opened around Christmas of 1997. Needless to say, these guys are the figures that doomed the awesome '94 Star Brigade figures. They wouldn't sell even at discounted prices. That is really a shame, as many of the figures are good. At least, though, it allows you to acquire Payoads cheaply and easily. Beware, though, as Payload's face shield tends to yellow. I have 5 of them out of the package and they all have yellowed visors. Finding one with a clear shield is a challenge, but the figure works well regardless. The obscured shield only enhances this guy's position as a faceless minion in my collection, though. Once you have a Payload, though, you realize the army building potential and will welcome any additional specimens into your collection. 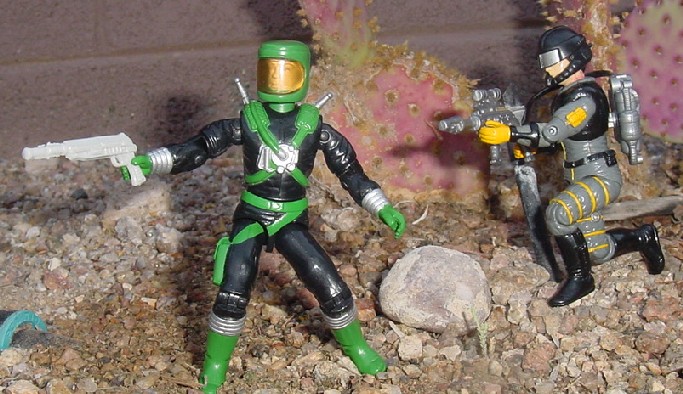 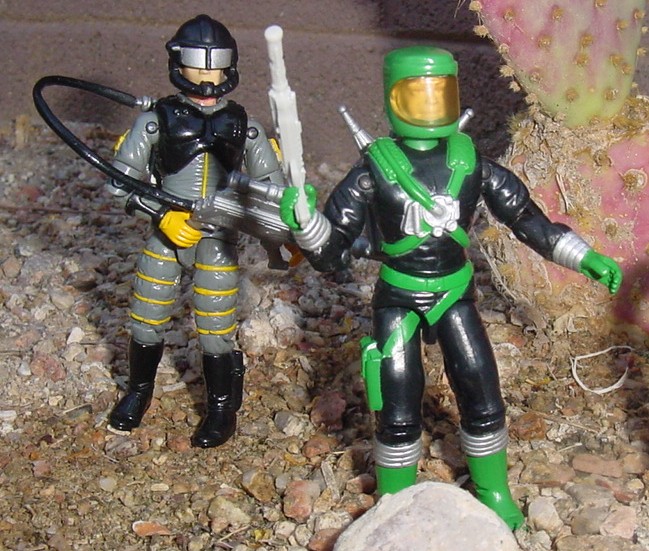 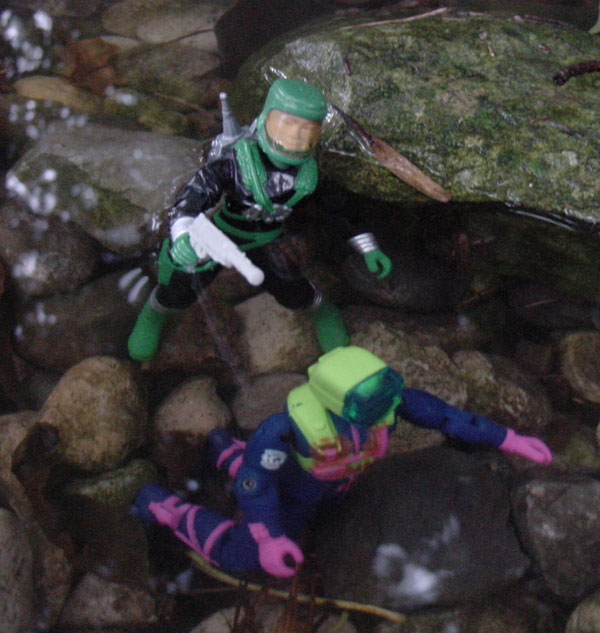 Posted by Robot_Sonic at 10:44 AM
Email ThisBlogThis!Share to TwitterShare to FacebookShare to Pinterest
Labels: 1993, Payload, Star Brigade