In the first half of 2004, the initial images of the upcoming Comic Book Packs surfaced. Collectors were wowed by the assortment of figures: but the enthusiasm was largely due to the fact that there would another outlet for vintage style figures at retail. The first 9 figures had their gems. Everyone wanted another Cobra Trooper at retail. There were highly anticipated new head sculpts for original 13 characters.  And, we were finally getting Kwinn.  But, the figures were also flawed.  As was the case with many releases of the era: Hasbro tried to make do with what they had handy rather than what made sense.  So, while it's great to see a character like Kwinn, he is far from perfect.

In the summer of 1984, I walked down to the local Hook's Drug Store to get some candy. My cousins and younger brothers were with me. When we went into the store, I noticed G.I. Joe #27 on the comic rack. (They kept the comics between the greeting cards and the pharmacy, so I rarely went over to that part of the store.) I had to buy it as I had read my friends copy of #26 just before school let out for the summer. As a sign of the times, though, I didn't have enough money to buy it. I had only brought .25 to the store to buy some candy. (Amazing that a quarter was enough to get 2 Jolly Rancher sticks and get change....) In the irrational fear of a 10 year old, I couldn't leave the store in case someone came and bought all the copies of the comic they had in stock. So, I convinced my cousins to walk back to our house with my brothers and then walk back with some additional money so I could buy my first G.I. Joe comic book. Once I did this, the comic became a mainstay of my childhood. I soon discovered the Broad Ripple Comic Carnival just a few blocks from my home and this store became one of my main hangouts well into my teenage years. It was at that store in late 1984 that I found a copy of G.I. Joe #2 for the whopping price of $3.

When I got it home, I read the story and was awed by the introduction of the Kwinn character.  He was a fascinating villain.  He had thoroughly outfoxed the Joes.  But, had also sold out the Russians.  The final panel of Snake Eyes wearing Kwinn's necklace was a powerful image.  (It also was an early insight into Snake Eyes' character.)  It was cool to see the Joes working in a smaller team on a mission with a specific objective.  The fact that Larry Hama was able to tie the frequency modulator from this issue to Cobra almost 5 years later shows the dedication and forethought he put into the stories.  I started to wear the issue out as I read it so often.  I also started to notice the price for that issue was rising steadily.  So, I stopped reading it in hopes of preserving the issue's condition.  To this day, my only copy of #2 was the one purchased at the local comic shop all those years ago.

The issue sold me on the Kwinn character, too.  For a comic that was supposed to be "for a kid's toy", Larry Hama added a lot of complexity and depth to the characters.  Kwinn was complicated.  He was a bad guy: but with some morals and scruples.  (Kind of an early model for what would become Destro.)  He added political intrigue with the Russian element and showcased the grim realities of the world with the station crews going mad and killing themselves.  The comic remains a powerful memory for me because the intricacy of the characters made it far more compelling reading than most items geared at boys under the age of 10 at the time.

Kwinn only really had two looks in the comic. He wore his winter gear in his debut in G.I. Joe #2 and then switched to Khahki shorts when he returned in #12. Getting a figure to match his jungle look with existing vintage Joe parts would have been difficult and likely produced an awkward looking figure.  The character's introductory winter gear was also problematic.  Kwinn was supposed to be a giant man.  His dossier in G.I. Joe #2 lists as 6 feet 10 inches tall and 260 pounds.  It would be impossible to showcase that impressive physique with existing Joe parts.  So, Hasbro made due with what they had.  As with Horrorshow, Kwinn's size is lost in the process.

Like most of the comic pack figures, though, this Kwinn isn't without his issues.  The main beef is that the figure's fur collar is attached to his head.  Looking straight ahead, this isn't much of an issue.  But, as soon as you turn the head, it becomes apparent and makes the figure rather odd looking.  It also precludes the head's usage on other figures without modification.  Since these figures were heavily clearanced, it wasn't a huge deal for collectors of the time to have a few spare Kwinn figures (especially since the Scarlett in the pack was also desirable custom fodder) so this wasn't a huge hindrance.  Kwinn's use of Big Ben parts, though, was a big cliched.  Big Ben is a great figure.  But, he was released in 2001, 2002, 2003 and his parts appeared multiple times in 2004 and 2005.  In short, collectors were sick of him and the parts that comprised him.  So, Kwinn appeared a little stale due to the overuse of the chest pieces.

Kwinn's gear is OK.  The mighty Eskimo was known for .30 cal machine gun.  While Hasbro had a more suitable weapon mold in the doomed 1995 Sgt. Savage line, they were not yet creative enough to think that far outside the box in 2004.  So, Kwinn was, instead, given the 1984 Roadblock's .50 cal machine gun.  Really, all the two weapons have in common is that they are big machine guns.  And, as Roadblock's weapon is iconically his, it looks even more out of place with Kwinn.  The figure does have a nicely done Weasel Skull necklace.  It's rough.  But, anything in this scale would be.  For good measure, the figure also includes a random black version of Dial Tone's weapon as well as a repainted Order animal that's meant to be a sled dog.  In short, a simple machine gun swap would have done wonders for this figure.  But, considering the era in which he was released, at least Hasbro tried to match the character's comic weaponry.

It is somewhat difficult to believe that this figure is now more than 13 years old. Despite the age, the figure still seems new to me. That's partly due to the fact that ARAH style figures have been pretty much dead since 2006 and even in the years before that, the number of releases was relatively low. As such, Kwinn feels like a new acquisition since there have been so few figures released after him.  I could have gone for a convention repaint of this figure, but maybe with a newly sculpted, hooded head.  It might have worked out and been a much more fun release than much of what we got.  I always found it odd that the ARAH style convention sets never attempted to reuse the Oktober Guard or Kwinn figures as they were collector favorite characters whose repaints would have better resonated than the dull and lifeless club creations.

Hasbro brought the Kwinn character back to life with an Anniversary release in 2013. This figure seems to have sparked a bit of resurgance in this original Kwinn. Three or four years ago, mint and complete with filecard Kwinn figures would sit, unsold, for $1.00. Now, the figure seems to sell in the $8 range. But, you can get a carded 3 pack with the Snake Eyes and Scarlett figure for around $12-$15. Since the Snake Eyes is decent and Scarlett is new enough, it's probably better (and easier!) to just buy a carded pack if you want the Kwinn figure.  Like most figures from this era, you'll see dealer pricing at quite a bit higher as the once ubiquitous supply of Kwinns has started to dwindle.

I find this Kwinn a reminder of the days when Hasbro still cared about the Joe brand and used as a proving ground for new ideas for retail products.  Unfortunately, so many of them failed that it's easy to see why Hasbro gave up on the brand.  But, if you were around in 2004, the comic packs were an awesome idea and really energized the Joe community for a while.  Most of the figures from them are highly forgettable, though.  Kwinn isn't perfect.  But, he's good enough for a Hasbro release.  In some ways, at least we got him.  That's more than could be said for his contemporary characters like Scarface and Dr. Venom who were also integral to his storyline. 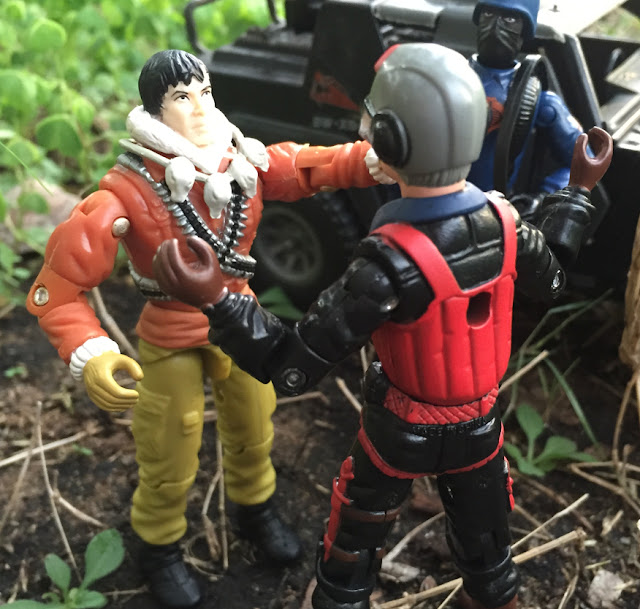 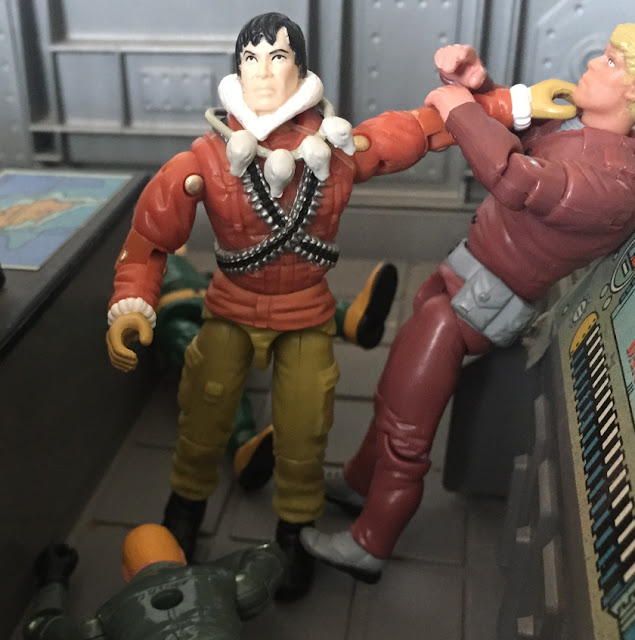 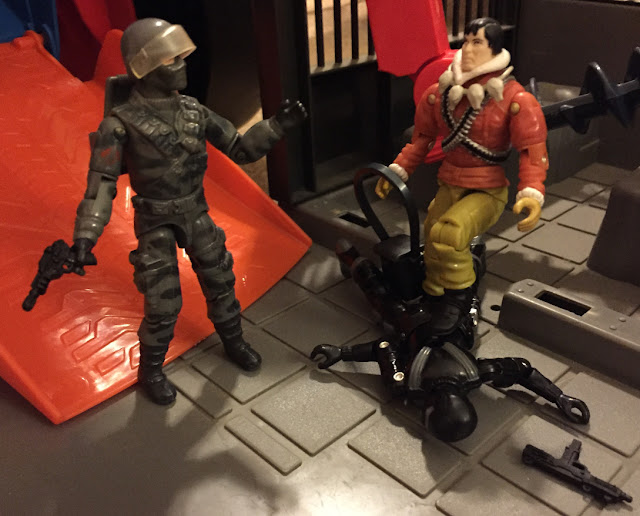 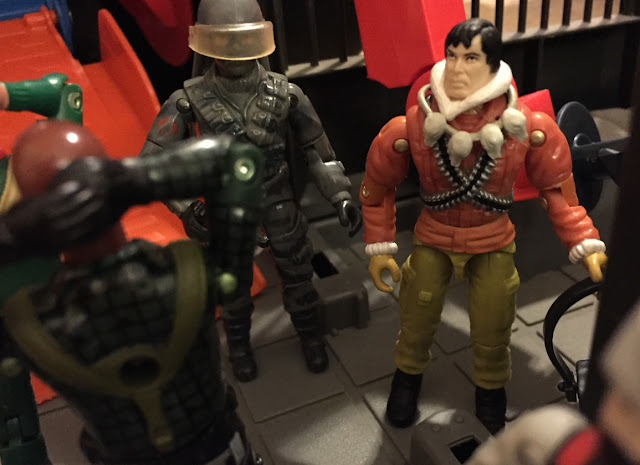 Posted by Robot_Sonic at 3:00 AM
Email ThisBlogThis!Share to TwitterShare to FacebookShare to Pinterest
Labels: 2004, Comic Pack, Kwinn