We all know the "Comic Book Guy" from the Simpsons.  You can hear his voice when you say "worst...Joe...EVER!".  But, which figure really is the worst?  Big Boa?  He's definitely horrible.  Raptor?  Terrible.  Crystal Ball?  Historically bad.  (Notice the 1987 theme?)  But, those figures, to me, get a break.  They were made in a time for kids of that time.  The designers of the Joe line took a chance.  It failed...miserably.  But, they were trying to make something great.  The Hasbro team of 2001, though, doesn't have that as a fallback.  They knew better.  They were making a line of Joes for collectors, to appeal to collectors and hoped that collectors would love them.  As such, their release of the 2001 Zartan figure really is unforgivable and that makes him my far and away choice for the worst figure in the line.

When Joe returned in 1997, collectors were lukewarm to the offerings.  Vintage Joes were cheap and plentiful.  So, the missing molds and generally lackluster repaints didn't ignite the collecting world.  1998, though, started to change things.  Hasbro filling in the Oktober Guard was a huge nod to collectors.  The classic Firefly figure returned to retail for the first time in 14 years.  And, Hasbro dropped 4 spectacular army building figures into the collecting world.  The 1998 line really felt like Hasbro really understood Joe collectors.  When the new line debuted in 2000, the first wave felt like it carried on this tradition.  Cobra Commander, the Baroness mold, another Firefly (that was OK then!) and General (Toma)Hawk all felt like they were made for collectors.  The rest of the figures were well done enough that the line felt like a solid homage to the vintage run.  But then, Hasbro out-thought themselves.  Instead of getting collectors what they wanted, they continued to pack army builders with named Cobra characters.  They painted every Joe in olive drab: diluting the color.  And, terrible homage figure shredded any credibility that the Joe team at Hasbro had.  The line spiraled into oblivion as retail interest faded away.  The final insult was the release of the Zartan figure.

In 2001, Zartan was about as popular a Cobra as you could find.  At the time, it was rare for a G.I. Joe figure to appear on "Best Of" toy lists.  Joe just didn't have the cachet.  However, Zartan was an exception.  His name and gimmick transcended Joe and the Zartan figure was as popular as any of the mainstay Joes or Cobras.  Collectors really had no options.  There was the original Zartan figure.  And, that was it.  The 1993 Ninja Force figure was simply ignored as the Joe world of the time barely acknowledged any figure made after 1987.  So, collectors were keen for a new Zartan that was cheaper and less brittle than the original.  The anticipation was high: probably higher for any figure other than the planned "Crimson Viper" that ultimately ended up a convention exclusive release.  When the figure appeared, though, the disappointment was colossal.  The Zartan was not the version 1.  It was a newly amalgamated figure using the SAW Viper body and a new head based on the original.  To say the figure was terrible and not in any way up to the legacy of the original Zartan is an understatement.  Collectors were dismayed at Hasbro's complete ineptitude when it came to such and important character.  They had completely bungled one of the easiest slam dunks in the line's history.

The very best part of the Zartan story, though, comes from India.  Right after Hasbro botched their Zartan figure, Funskool announced they were releasing a Zartan figure on a single card.  When the images showed up, Funskool was using the V1 Zartan mold!  And, it was a slight repaint of the American figure.  In short, it was everything American collectors wanted.  So, the Hasbro Zartan was all but forgotten as jilted collectors instead spent $4 to buy Funskool Zartans.  This way, they got a mask and the original gun (though in red).  The upside is that this fiasco lead many collectors who had avoided Funskool due to quality control issues to finally take the plunge to get a cool new Zartan figure.  The bad news was that Funskool quality at the time was terrible and many collectors found their worst expectations of poor quality to be true.

The real travesty of this mold is that it used up a slot on the SAW Viper's body.  As such, the body got a bad rap.  We'd only see the SAW Viper one more time: in the 2003 Python Patrol set.  Sadly, this figure is not in the standard pattern as the rest of the figures and is bright red in color.  The SAW Viper would have been a great substitute in the Urban Strike set or as part of a convention army builder.  The Zartan head created for this release could have found life on another, better conceived Zartan.  But, Hasbro got the V1 Zartan mold back from Funskool in 2003.  (In an ill conceived attempt to appease collectors.  Funskool's return of the molds ended up hurting collectors since Hasbro simply never used most of the molds and the Funskool figures who had been cheap and plentiful were taken out of production: never to return.)  From the ashes of this figure could have risen a phoenix of other, decent figures.  But, Hasbro let this Zartan and his parts die on the vine and focused their efforts on rehashes of the V1 figure.

One of the things that blinded Hasbro in the 2000's was their attempts to remain true to the originals.  In some cases, that worked.  But, in the case of this Zartan, it backfired atrociously.  If you take the flesh parts of this figure and color them silver, you get a solid homage to V1 Zartan that's not ridiculous.  The collar on his chest would then make sense and you get a figure that was different enough that people might have actually warmed to him.  The SAW Viper accessories still made no sense.  But, a few extra sets of those were nice to have when the 2004 Cobra Infantry Team was so weakly equipped.  Just making one color change would transform the worst figure ever into something that collectors could have, at least, accepted.  I doubt even that figure would have been popular.  But, he wouldn't be the laughingstock of the line.

Again, this figure is worthless.  It's so worthless that you don't see them very often because no one wants to waste their time on the figure.  As the Shadow Viper with whom he was packed isn't an overly popular army builder, there weren't collectors who stockpiled dozens or hundreds of spare Zartan figures and who will easily part with one for a buck or two.  But, you can find the figure without too much trouble if you ask around.  Since you can get a carded version for under $10 and that includes the excellent Shadow Viper, it's probably best to just buy a carded sample and open it up.

I hate this figure.  I hate this figure because he's terrible.  I hate this figure because he took up a rare slot for a vintage figure and it was wasted.  I hate this figure because I hate what Hasbro turned the ARAHC into.  But, mostly, I hate this figure because someone (probably a lot of someones) at Hasbro at the time looked at this monstrosity and thought that collectors would gobble up garbage because it had the Zartan name.  And, they were right.  I have one.  At one time, I had three or four of them due to my acquisition of a few Shadow Vipers.  But, they were also wrong.  The type of lazy thinking lead to demise of the short lived Joe line.  I suspect that was Hasbro's plan as they geared up to get the JvC sculpts into production.  But, their disdain for collectors lives on to this day.  And, that irritates me.  But, I see items like the 2017 Missile Command and think that, maybe, Hasbro is finally starting to get it.  But, when items like that are only available for exclusive, limited windows before you have to pay a 100% - 200% markup on the aftermarket,  I still see them thumbing their noses at us.  But, like I said, I'm still here.  So, now we all know who the true fool is. 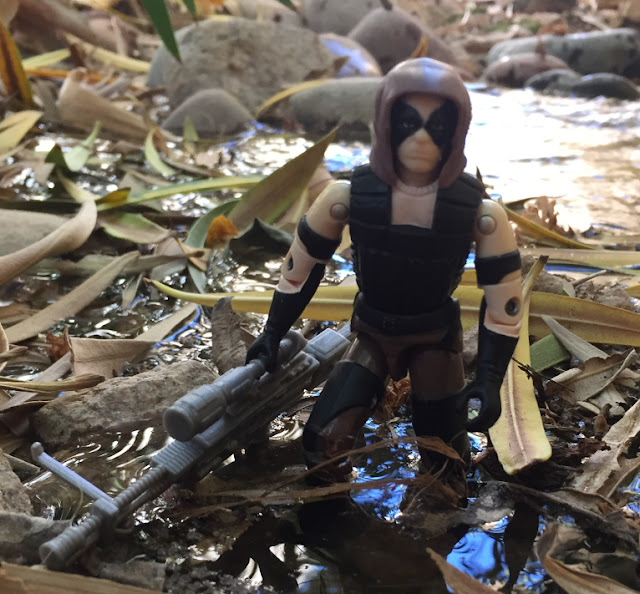 Posted by Robot_Sonic at 1:00 AM
Email ThisBlogThis!Share to TwitterShare to FacebookShare to Pinterest
Labels: 2001, ARAHC, Zartan