I'm a Pathfinder fan.  On one hand, this makes sense since he's a good figure from a solid year of G.I. Joe releases.  On the other hand, though, Pathfinder was released long after I had stopped collecting toys and he never played a part in the comic.  (My only G.I. Joe consumption of the time.)  So, there's no real connection to the figure that explains my affinity.  Mostly, Pathfinder seemed exotic.  When I first started collecting Joes, all of the 1990 and 1991 figures were actually quite hard to find.  You never saw them in photos, beyond the fact that Pathfinder's head was often used in customs of the members of the LRRP that also included Snake Eyes, Stormshadow and Stalker.  When I first acquired a Pathfinder, it was as part of a large lot of figures that I had never owned before.  And, Pathfinder stood out among all the new acquisitions.  He remained a personal favorite for a while and kept his generally obscure stature in the collecting world until 2001: when Hasbro created this repainted version as the driver of a Toys R Us exclusive AWE Striker repaint.

At first, it was great to see Pathfinder.  In 2001, Hasbro hadn't really let the extent of lost vintage molds be known.  So, seeing a figure like Pathfinder gave us hope that many more exotic gems would follow.  (Spoiler, they didn't.)  But, in and of himself, Pathfinder was a good release that gave many collectors their first exposure to the sculpt.  Of course, though, he dark black and grey colors joined the muted look of his contemporaries and he faded into any group shot due to the over-saturation of various color hues.  But, seeing Pathfinder included with a vehicle gave hope that there was more great stuff to come in the line.

As a character, Pathfinder is a blank slate.  His sunglasses obscure his eyes and give him an eerie, mysterious look.  But, his specialty does not really lend itself to anything other than a standard infantryman who took on the dangerous work of blazing the trail for his team.  There's probably something slightly off about someone who would volunteer for point duty while wearing a massive buzzsaw that would be heard from miles away in a combat zone.  So, should I ever undertake a Pathfinder characterization, that will be my likely starting point.

This coloring of Pathfinder was largely seen as a "Night Force" incarnation of the character.  While there was nothing official to denote this, collectors of the era took the figure's colors in conjunction with the all black AWE Striker as a direct Night Force homage.  For that reason, this Pathfinder did see a bit of online notoriety for a couple of weeks.  But, that soon petered out and even the AWE Striker repaint fell off the radar.  There was simply so much going on in the Joe world of that time that new releases (unless they were spectacular) fell to the wayside once most people had them in hand.

Pathfinder has few variants for collectors to find.  There is the 1990 figure.  It has a European accessory variant, though the figure is the same.  The figure was planned for release in 1998 in a pack with Outback and Dial Tone.  But, that pack got cancelled.  We got this figure in 2001 and then a re-release of that same figure, though now with accessories in 2004.  The "Chocolate Chip" Pathfinder is a great miss for the collecting world as that set would have been great.  And, the 2004 figure could have been something different.  But, he was released in a set of two vehicles and three figures for $20, so there probably wasn't much budget to get something new.  Hasbro kept the Pathfinder mold after Funskool had stopped producing Joes, so there are no foreign repaints.  So, we get to enjoy two solid Pathfinder figures even if we could have gotten more.

While many vehicles from the 2000's have risen dramatically in price, the AWE Striker has not.  This is likely due to the mold's later overuse.  And, that disinterest in the vehicle has dragged this version of Pathfinder down, too.  Loose figures can be had for $1-$3.  (You'll pay around $9 for a 2004 version complete with the repainted accessories, though.)  You can get AWE Strikers with the figure for between $10 and $20.  Of course, neither the figure nor the vehicle are as common as they were a few years ago.  But, it's worth tracking down a version of Pathfinder for a couple of bucks.  He's something different, even if the 1990 figure is substantially better.  And, he's aged better than you would have thought back in 2001 just because we didn't see him again and the colors appeared with less frequency in subsequent years. 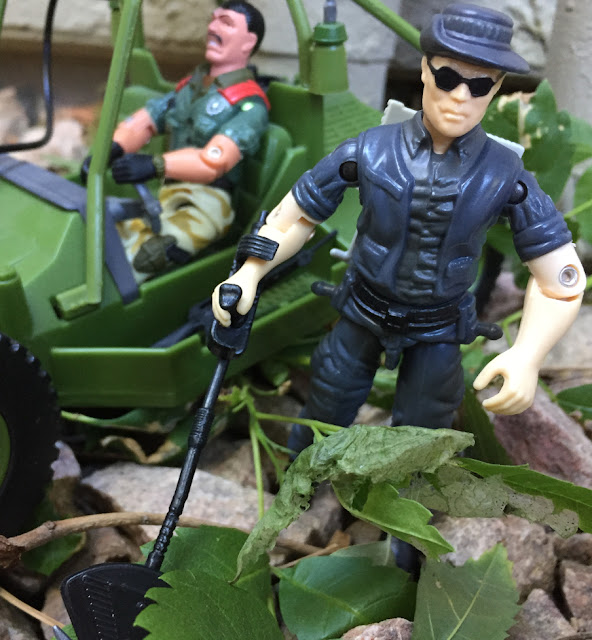 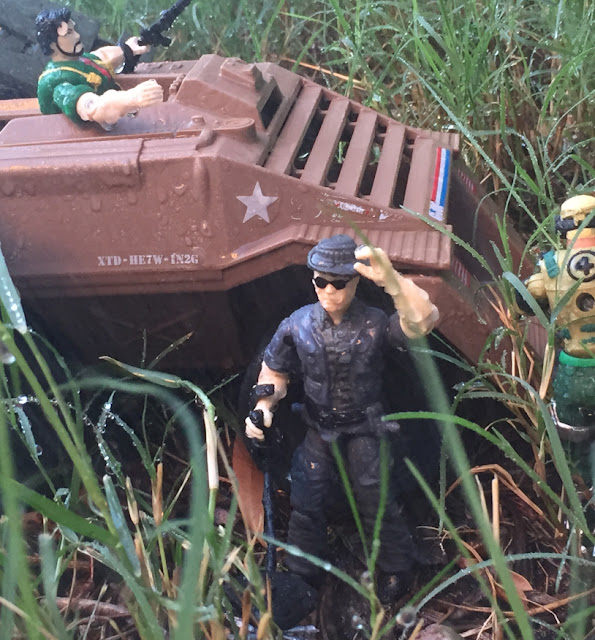