As a young child growing up in the original Star Wars era, I found the toys of Luke Skywalker problematic.  The only Luke that was available for the first two years of my young playing days was the Tatooine Luke with the sculpted lightsaber on his right arm.  For the instances where Luke needed a sabre, this was perfect.  But, for me, Luke having a blaster made far more sense.  It was not until 1980 and the Empire Strikes Back that I was able to get a Luke who included both a blaster he could hold and a separate lightsaber.  With this figure in hand, Luke and Han embarked on epic adventures.

As I got older, the fact that a lot of time passed between Star Wars and Empire became more obvious to me.  During this undocumented time, Han, Luke and Leia must have had spectacular adventures as they evaded the Empire.  The Luke of this era would not have really been aware of his Jedi powers and would have been closer to the character he would have become had he left Yavin IV with Han rather than blowing up the Death Star.  That era, though, was not really explored if you didn't read EU books (which I did not).  But, it seemed a time that was full of great stories that showed Luke's growth from the kid on the trench run to a full flight commander just a couple of years later.

I watched the Star Wars Holiday Special when it aired on TV.  I remember as my parents knew it was on and we had to hurriedly leave the Glendale Mall in Indianapolis to make it home in time to see the show.  While I have distinct memories of seeing Han and Chewie in person, I don't recall seeing the cartoon.  It could be that we got home too late to see that part and missed it.  Or, I simply forgot about it because of seeing the real characters on the screen.  When I found the cartoon in the late 1990's, it was the first appearance of Boba Fett that initially got my attention.  But, Luke's look was also interesting.  It was obviously based on Luke's appearance at the end of A New Hope and put him on par with Han as a swashbuckling adventurer rather than the Jedi he would later become.

When Star Wars returned to retail in 1995, the Ceremonial Luke was one of my most desired new figures.  When he was finally released in 1997, I had to get him.  And, Hasbro's first attempt at the character was one of their better efforts of that time and the first Star Wars figure to appear on this site back in 2000.  In the POTFII era, that Ceremonial Luke was a highlight and remains one of the few figures I have left from that time.  This new version from a decade later, though, showcases all of the advances that Hasbro made during that interval.  The sculpting is better, the figure is more in scale and the accessories and articulation are simply spectacular.

After I saw Rogue One on its release night, I was stoked about Star Wars.  I started buying figures again.  I scoured online sites and started getting up to speed on many of the items I'd missed over the years when I was focused 100% on Joe.  But, when I was gearing this profile up for publication, I realized that it's been a really long time since I've looked at a Star Wars figure.  It's been about that long since I bought one at retail.  I haven't bought any of the new vintage collection figures because I haven't been able to actually find any of the characters that interest me.  Now, I get lambasted for this by "serious" Star Wars collectors who only order online from places that guarantee condition, etc.  But, my interest in Star Wars is relative to the ease with which I can collect it.  Buying cases online takes the fun out of it.  And, searching to NEVER find anything is equally appalling.  So, I've spent no money on Star Wars for nearly two years.

The truth is, Hasbro couldn't care less.  One collector spending $200 per year is irrelevant to them.  The big thing, though, is that I have three boys who are of the age when action figures should be drawing them into a property.  They have no interest in Star Wars toys, either.  Losing a generation should concern both Hasbro and Disney.  Though, if Hasbro gives up the Star Wars license (I'll believe it when I see it, though.), they have no reason to care about the future.  The point for me, though, is that the joy of collecting is gone from Star Wars.  It's an adult oriented, go through the motions hobby with a few joyous clearance finds.  That's a far cry from my burgeoning adult collector days in the late 1990's when Star Wars ruled retail.

So, in looking back at this figure, I recall a more fun time of Star Wars collecting.  The prequels were over and collectors were settling into an era of no new media, but overwhelming retail support for the Star Wars property.  Every month, it seemed, new waves of figures were being released.  And due to the strong sales, it wasn't really hard to find anything.  It was fun because collecting wasn't hard.  You could get the toys you wanted in the quantities you wanted.  But, all things must end.  And, I find myself, once again, at the end of the line for my Star Wars enthusiasm.  It's possible my oldest boy will take up the mantle.  But, his interest in Star Wars is less toy driven.  So, he may love the property, but never actually play with any action figures.  Again, it's something very different from what I'm used to.  But, that's OK and I'm at a point where if Star Wars figure collecting becomes a relic of my past, I'm OK with that, too.

Like many of Luke's 30th Anniversary brethren, this figure is now worthless.  You can still get carded figures for about what you'd have paid at retail in 2007.  In lots or with patience, you can get them for even less.  To the best of my knowledge, Luke in this outfit has never been released on a vintage cardback.  (Though, one is coming soon if it's not out already.)  I'd actually buy that.  But, this figure is good enough for me.  It's not perfect.  But, few Star Wars figures actually are and Hasbro continues to improve certain characters and figures in increments that leaves you with you many close but not quite perfect releases of the same character. 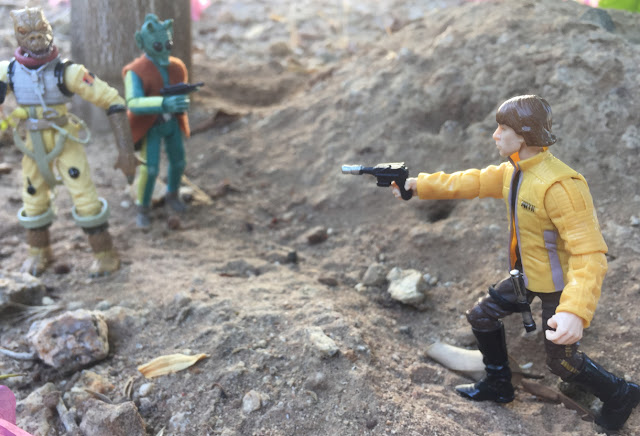 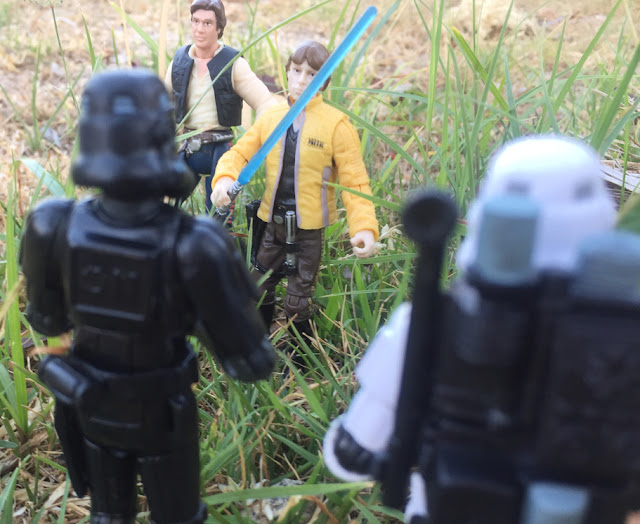