Included as part of the Extreme Conditions:  Desert Assault Squad set, the Cobra Hostile Environment Trooper took the Flash/Grand Slam body and topped it with the Cobra Officer Gas Mask helmet.  The helmet appears to be a reworking of the ARAH head of the Comic Pack set, which was turned into a removable helmet.  It was also released in Cobra Blue for use as the Cobra Air Trooper.

At a first glance, this is a great figure.  The helmet alone pretty much would make any figure look great.

The color set used for this figure are perfect for a Cobra trooper.  A creamy tan for the uniform, with black boots and gloves, plus brown padding (in some indoor light the padding looks more burgundy- or maybe I just really really want it to).

But at second glance reveals problems.  In 2008, when almost everyone was going crazy for the new 25A body style, its flaws were overlooked.  Those hands.  Those teeny tiny hands manage to screw up the proportions for the rest of the figure.  And then there’s the upper torso articulation point.  I’ve never liked these, but I can live with them when they’re hidden.  This body is frustrating because had the chest padding been removable, like many of the other webgear sets of the time, the upper torso articulation point would be largely hidden.   As it is, a streak of tan slices through the chest padding.  It’s visually disruptive.

A silver Cobra biohazard logo is printed on the upper portion of the chest pad, but as good as it is, it can’t compete with the very intricate grid pattern already sculpted onto the padding.  The logo gets lost.  Despite its precision, it looks like a glop of silver.

As far as being biohazard-ready, this outfit doesn’t look like the highest level personal protective gear outfit.  It’s the “get you by until the Toxo-Vipers arrive” level.  For Cobra, this feels about right, so it’s okay.

The head (under the helmet) is the 25A Cobra Trooper head, with tan hair painted on what was originally a bald scalp.  I don’t really have an issue with this because some people keep their heads nearly shaved, but other collectors find it a sticking point.  It probably should bother me, it just doesn’t.

In addition to the helmet, the Cobra Hostile Environment Trooper comes with a Demro Wasp rifle (Beachhead’s rifle), a standard Cobra helmet, and Barbecue’s backpack w/hose and nozzle (this was before a modern era Airtight had been created, so his gear didn’t exist to utilize).

The fantastic helmet isn’t quite enough to make this a fantastic figure. 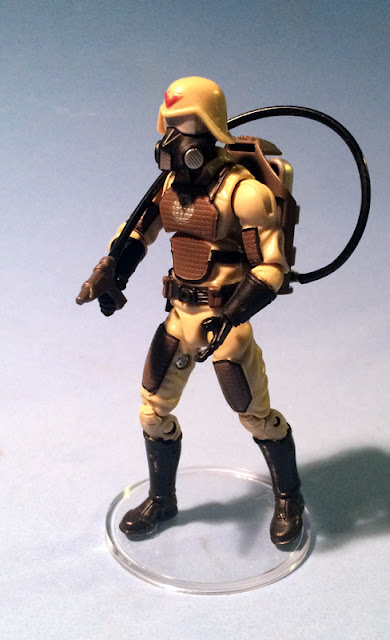 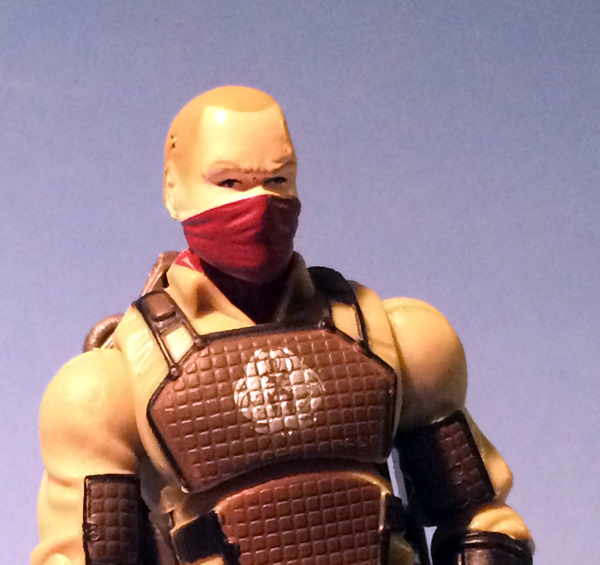 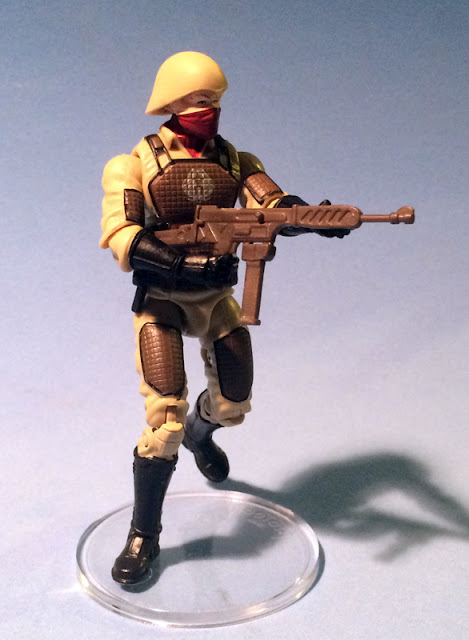 Posted by Robot_Sonic at 2:26 AM
Email ThisBlogThis!Share to TwitterShare to FacebookShare to Pinterest
Labels: 2008, 25th Anniversary, Cobra Hostile Environment Trooper, Past Nastification