After stumbling onto a 2012 Clutch figure, I embraced the low points of articulation (poa) Retaliation vehicle drivers.  Yes, it is Hasbro cutting corners to make an official GI Joe product.  But the sculpting impressed me so much I begrudgingly approved and went on to acquire a Night Fox.    The format, though cheap, has its appeal.

Night Fox was included with the Ninja Combat Cruiser as its driver.  As that vehicle was a reworking of the VAMP, Clutch might have been a more appropriate driver.  Clutch may have actually appeared in Retaliation as the driver of the Tread Ripper.  However, my retinas can’t handle another viewing of that stankfest (and I’ve only seen it once), so there won’t be “research” to find out.

Night Fox first appeared in 2010 as the driver of the AWE Striker.  That figure and this version of Night Fox share a flaw.  The head is obscured by a mask.  I’ve gone on this rant before:  good guys (other than Snake-Eyes) should have visible heads.  Or at least ones with removable helmets or exposable faces.  ARAH Fastdraw works because the flip-up visor revealing his mug.  25A Beachhead works because there’s an alternate pop-on head.  And unlike the 2010 Night Fox, this one’s eyes are entirely obscured by goggles.

Speaking of obscured heads and the Retaliation driver figures, there’s also the Duke figure included with the Ghost Hawk II.  In my review of Clutch, I failed to list that as one of the low-poa Retaliation figures.

In my Retaliation Clutch review I said I’d be fine with low poa Cobra Troopers as freebie pack-ins with vehicles or playsets.  This Night Fox would be the figure to use.  The head is realistically sculpted, but it doesn’t register as a specific Joe because it’s far too anonymous.  Mold the figure in Cobra blue, mold the vest in black, throw red on the mask and you’ve got an inexpensive Cobra Trooper.

Much like the original Night Fox, this one is calling out for a customized head swap.  Hasbro has given us alternate pop-on heads before.  Given that Hasbro already saved a buck by reducing the articulation, an extra unmasked head would’ve been a generous and appreciated move.

The head is one of the few heads in the entire GI Joe run, ARAH through Modern Era, that has no paint applications.  It’s solid black.  Aside from a few Snake-Eyes (it seems like at least one NS Snake-Eyes was solid black in addition to the first ARAH one), the “hologram” Comic Pack Cobra Commander, and the clear GI Joe Collector’s Club Zartan, it’s very rare for a Joe figure to have zero paint applications on its head.

Like Retaliation Clutch, the sculpting on Night Fox is fantastic, assuming you can accept that it’s low poa.  The bend in the arms and at the knees, along with the outwardly angled feet, give Night Fox a fluid stance.  The uniform is crumpled and baggy.  The pouches on the vest are crisp and detailed, including one that’s marked as being a first aid pouch.  There’s even sculpted “extra” thigh strap material that lies drooping.  The arms are prepositioned to hold a rifle Palitoy Action Force style.  Which also means that Night Fox is also an unsafe, one-handed driver.  No “ten and two” hand positioning on the steering wheel for him.  Unlike his fellow Retaliation driver figure Clutch, Low Light has arms that are long enough for his proportions.

The figure itself is molded in black, with only a dab of light khaki on the back of the neck.  This is only there to complete the illusion that the backpack runs across the shoulders.  The vest is dark khaki with some details popped out with light khaki paint.  I’ve read and seen complaints about the lack of paint applications on the body.  However, the figure’s codename does include the word “night” in it, so all-black isn’t unreasonable.

Please note that the action figure’s plastic is a bit darker than these images, which have been adjusted somewhat in Photoshop to show the detail.  Otherwise the figure would look like a solid black shape.

Night Fox’s accessories include a rifle and the removable vest.  This particular figure is missing its rifle, so I’ve substituted a Demro Wasp from Beachhead.  The vest is removable, but it’s not interchangeable with other figures because it’s keyed specifically for the Night Fox torso.  Odd, but it looks good on the figure.  The figure looks deformed without it, so going “vestless” isn’t an option.

If you can accept low-poa figures, you’ll probably enjoy this figure.  If you can’t, it’s understandable.  Hasbro should be ashamed.  I’m just forgiving. 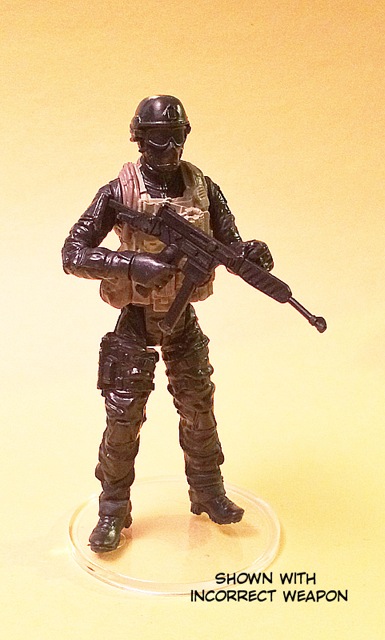 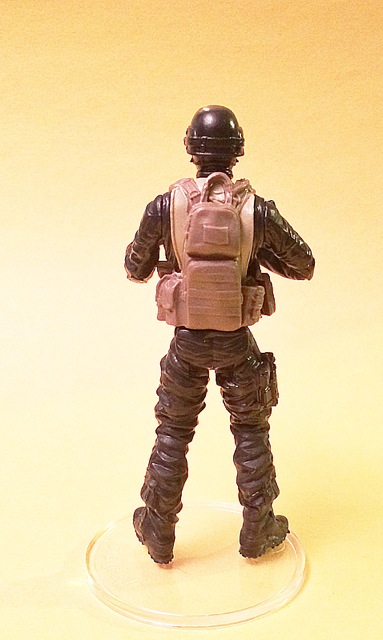 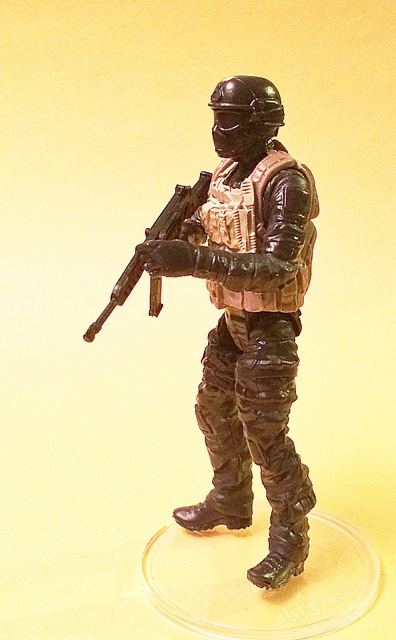 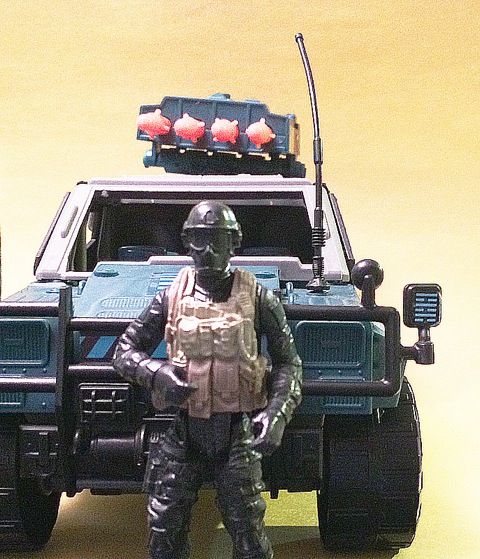 Posted by Robot_Sonic at 4:41 AM
Email ThisBlogThis!Share to TwitterShare to FacebookShare to Pinterest
Labels: 2012, 25th Anniversary, Night Fox, Past Nastification, Retaliation