Married With Children Set - By Past Nastification

The world of 1:18 figures has had a nice influx of Joe-friendly brands and figures the last several years.  Buffy the Vampire Slayer, Back to the Future, many of The Twilight Zone figures, Saturday Night Live’s Tina Fey & Amy Poehler (which I wrote about on joeaday.com), The Big Bang Theory, and today’s review, Married with Children have all joined the ranks.

I should define “Joe-friendly”, as the reviews here are obviously aimed at Joe collectors.   Because the Bundys, unlike 1:18 scale Game of Thrones figures, can plausibly be used by collectors in dioramas as civilians without raising an eyebrow, I view them as “Joe-friendly”.  Sure, they’re more character specific than Fischer Price Adventure People, but if you dotted them throughout a Springfield diorama, an average person (that is to say, a normal grownup who doesn’t own toys) might not even notice what they are.  The figures could also be used for customizers with no problem.

1:18 scale Al Bundy is Joe-Friendly; 1:18 Jar Jar Binks is not.  There is some grey area for sure, like the Star Wars Endor trooper(s).  They look real-world soldiery enough to slide into the grey zone.

This set is called “Married with Children” by Funko and it contains Al Bundy, Peggy Bundy, Kelly Bundy, and Bud Bundy.  This set is labeled as a “2018 Fall Convention Exclusive”.  Being an Amazon purchase, it couldn’t have been too exclusive, but I’m not sure if that means that there are variations in packaging or figure colors.

The head sculpts set the tone for figures like this.  Whereas Buffy the Vampire Slayer and Twilight Zone figures go for a broad “why pay for likeness rights?” feel more than an actual likenesses, these figures actually have enough nuance and detail to look like the actors on whom they’re based (Ed O’Neil as Ed Bundy, Katey Sagal as Peg Bundy, Christina Applegate as Kelly Bundy, and David Faustino as Bud Bundy).  Unfortunately, the work put into the faces/heads wasn’t fully realized in production because the plastic is bit on the waxy side (think Stars and Stripes Forever) and the paint could be improved (Al and Bud don’t have eyelashes, creating blank stares on their faces).  On the upside of this, though, is that the unrealized potential makes them even more Joe-friendly.

Each of the figures is dressed and sculpted appropriate to the character.  I can’t say if the outfits are episode or opening credits accurate, but they look exactly like they need to.  The Kelly figure is begging to be customized into a Dreadnok, by the way.  Subtle details by the sculptor(s) show a good eye for detail.  Bud, for example, has one sneaker fully under the pant leg and the other one with the pant leg partially stuck into the sneaker.  Al, of course, sports a grin of frustration.  Peggy’s B-52 haircut and leopard print sandals (or are they cheetah print?) are wonderful.

The figures are scaled correctly to each other, with Bud being about the same height as Kelly.  There are no accessories, and the lack of a canine Buck Bundy stings just a little bit.  This set should have come with a couch.

The articulation on these figures is good, with 9 points of articulation on each figure.  The figures appear to have “swivel arm battle grip” at the elbows, but they don’t.  An extra piece of plastic is inserted into the bottom of the lower arm instead of being part of it.  The elbows only hinge.

Funko is using an interesting technique on some parts.  Instead of painting things to match, parts are molded in the correct color and then glued/locked into place.  Bud’s hands don’t swivel, but were molded in a flesh tone and then plugged into the end of the sleeve.  I managed to break one of Bud’s wrists thinking it swiveled.

The coloring on the figures isn’t photo realistic, but it’s about in the right range for Joe figures.  Kelly’s blonde hair, for example, isn’t simplistic Crayon yellow, but it’s not realistically platinum blonde (with a metallic wash for that lifelike look) either.  Instead, it’s a dull yellow tan that works for this caliber of figures.

These figures were clearly designed with a respect for the source material and are higher quality than similar “based on a TV show” figures.  They obviously work as intended as Married with Children figures, or even as Joe-friendly diorama pieces. 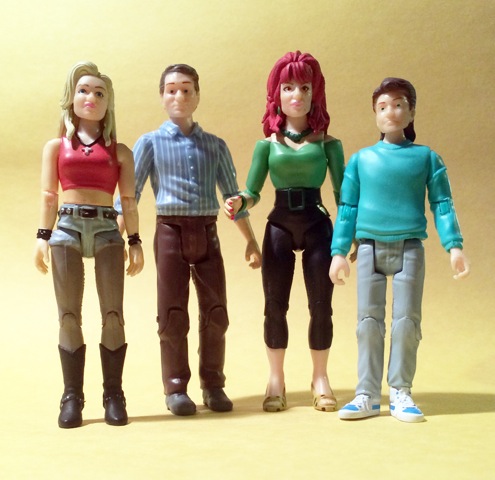 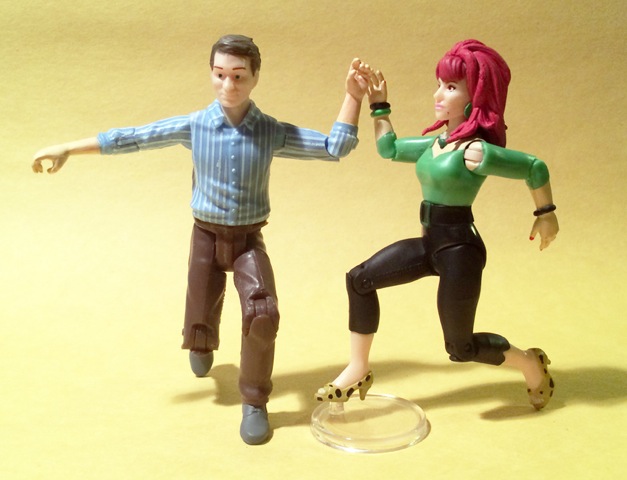 Posted by Robot_Sonic at 8:03 AM
Email ThisBlogThis!Share to TwitterShare to FacebookShare to Pinterest
Labels: 2018, Not_Joe, Past Nastification