Collectors have long known that some Funskool figures were among the rarest figures in the line.  It was not uncommon for "new" figures to be discovered well into the early 2000's.  But, after around 2004, that seemed to end.  Sure, there were lots of new variants being found.  But, completely unknown figures seemed a thing of the past.  Still, a few collectors had found some odd parts in lots they had acquired from India.  Most were written off as discolored figures or maybe some color variant of a released figure.  But, around 2009 or so, that changed with the discovery of the Complan Commandos.

The Complan Commandos were a series of five figures released by Funskool as a promotion for a kids drink.  The set consisted of Striker, Rocker, Cross Country, Rednok and Canary Ann.  Each of the figures was made from repainted G.I. Joe parts from early waves of Funskool Joes, with the male figures all being amalgamations of multiple molds.

The figures were packaged under the Complan Commandos banner.  They were done on the cheap and feature almost no paint masks and extremely minimal accessories.  Supposedly, they were a premium related to a chocolate drink available in India.  Though, I'm not sure if they were available in stores, or just as some kind of promotional item.

High quality Complan Commandos are very rare.  With that rarity comes expense.  Mint and complete versions of some figures will top $3,000 and even more.  Even really beat up samples will fetch over $100.  But, some of the early rarity was due to collectors asking for G.I. Joe only and these figures being ignored.  As collectors learned what questions to ask, more Complan Commandos appeared.  Not enough to make them common.  But, enough to make them available to more than two or three collectors.

The first and probably most interesting figure in the lineup is Canary Ann.  She is a straight repaint of the Funskool Lady Jaye.  As the name suggests, though, the mold is repainted in a canary yellow.  Topped with a red cap, this is the most drastic look deviation of any use of the Lady Jaye mold.  The lack of paint masks are a tough miss to overcome, though.  It appears she's wearing a yellow undershirt.  It's not completely out of whack.  But, it's odd.  Her all black waist, though, is too much.  It kind of ruins the figure.

Canary Ann included a black version of Lady Jaye's gun.  You can see her filecard below, too.  The filecard is actually rather interestingly written.  It's far and away better than the Funskool exclusive filecards we say in the Joe line in the early 2000's, even though it incorporates much of Lady Jaye's filecard info. 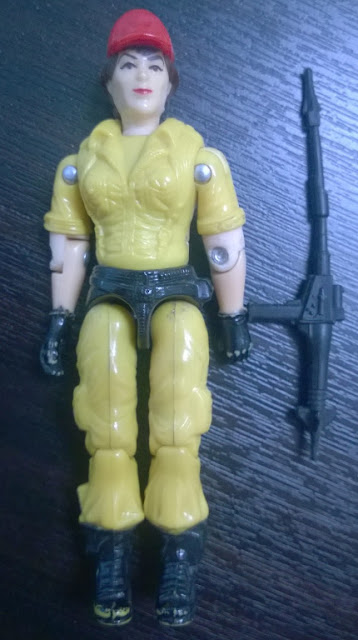 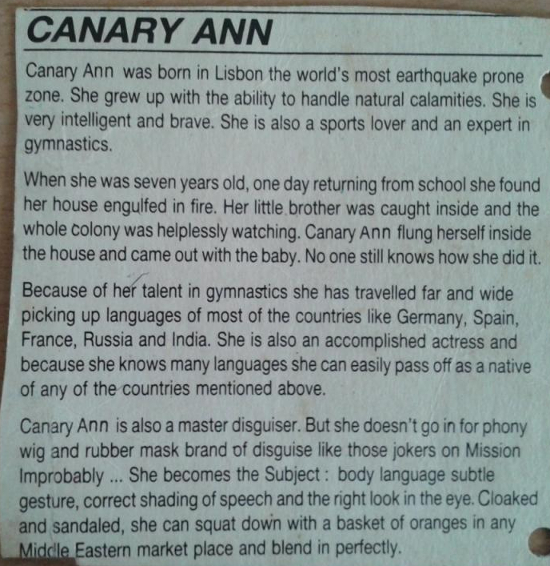 Next up is Cross Country.  He is an amalgamation of Scrap Iron with Zap's head.  The all red body with black highlights is rather Cobra.  He likely included a version of Firefly's gun.  You will see his filecard below.  It is heavily derivative from Beach Head's filecard. 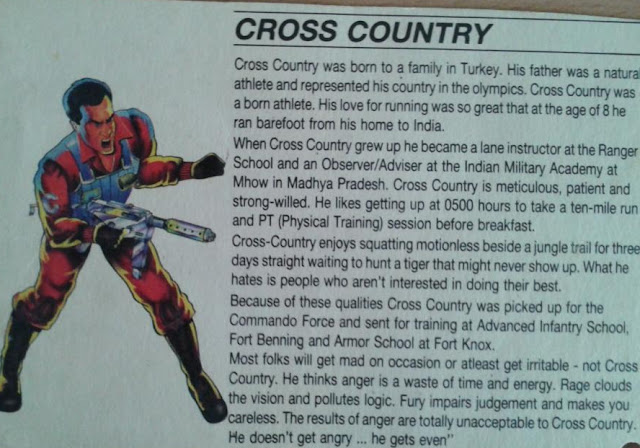 Rocker is next.  He is a blue Firefly body with a Short Fuze head.  The blue plastic is EXTREMELY prone to discoloration and most of the few Rocker's out there are heavily discolored.  The figure included a version of Torpedo's harpoon gun.

Rednok is the second female in the 5 figure set.  She is a red repaint of the Baroness.  Prior to 2002, this would have been an extremely in demand figure.  However, we have seen many red Baroness repaints in the 15 years since then.  And, as such, this version with no painted highlights just looks cheap.  But, as it's a Baroness repaint, Rednok will always maintain collector demand.  She likely included a version of Major Bludd's pistol.  Her filecard steals from both Jinx and Low Light.  This is odd as neither of those characters ever appeared in India.  So, you wonder where Funskool got the information.  The fact that her glasses are fake are also a different character trait. 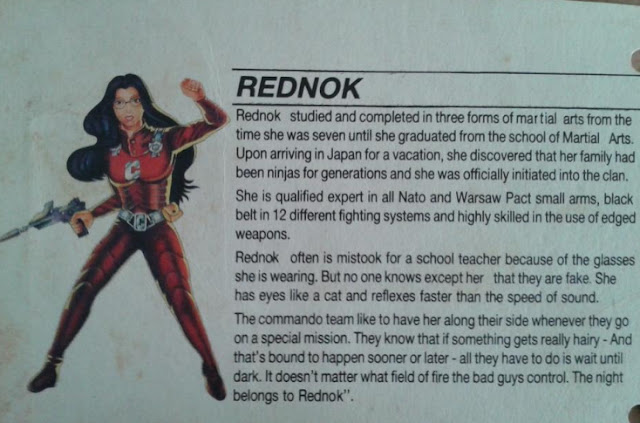 The final figure is Striker.  He is a green repaint of Gung Ho with a black haired Short Fuze head.  The figure looks a bit odd without the Marine Corps tattoo on his chest.  But, it's a different look for the mold.  (There is also an olive drab version of Gung Ho that was available as a Funskool vehicle driver that may have been a recolor using the paint masks from this figure.)  Striker included Gung Ho's grenade launcher.  His filecard steals from Big Boa.  I love that Bowling Ball was changed to Cricket Ball for the Indian audience.  The connotation changes quite a bit with this little detail. 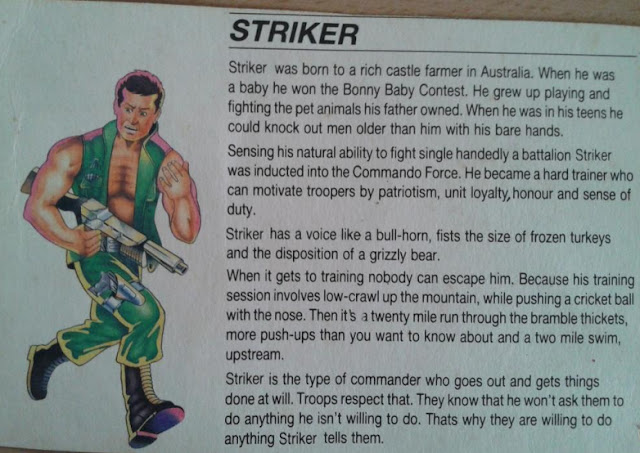 These figures exude cheapness and would be hated were they not among the rarest figures ever released anywhere in the world.  Even then, they aren't appreciated for their quality but their rarity and value.  The card artwork and filecards are, for me, the most interesting part since they take so much from around the Joe world.  But, for the hundreds to thousands of dollars these guys cost, those traits aren't enough to get me really interested in the figures.  Sometimes rarity trumps something cool.  Other times, though, it masks something that's kind of lame.  And, in the case of these figures, were they common, no one would touch them.  But, since they are extremely rare, collectors care and give them due they would not earn on their own design merits.