A swing and a miss!  That’s the best way to sum up the 2005 Short-Fuze, a comic pack figure.  It’s one of Hasbro’s re-animated uses of the ARAH molds to create figures directly inspired by their comic book appearances.

Some of the figures done in the sub-series (for lack of a better word), were pretty decent.  Stalker really captured the look/feel of the early Herb Trimpe artwork.  Short-Fuze is a good effort, but a low reward.

Short-Fuze’s head was new.  After not having his spectacles for 22 years, Hasbro finally decided to set this right.  The headsculpt has a center-part haircut, a somewhat pensive facial expression, and the glasses.  Two problems plague the head, though.  First, it’s underscaled.  If it were 15% larger, it would be perfectly scaled to the ARAH body.  Secondly, Short-Fuze’s glasses are painted as sunglasses, not regular glasses.

The glasses could have been sculpted “clear” like those of the Baroness, with no actual lenses, way back in 1984.  Or at least colored in a “clear substitute” color, like sky blue or dove grey.

The body is a retread of sorts of the ’82 body (with the larger belt) paired with ’83 swivel-arm battle grip arms.  The uniform color is green, but it is a forest ranger green, not olive drab.  Admittedly, it’s close to the green used by Marvel for the OG13 uniforms, but it manages to somehow look very… plastic, if not waxy.  The chest harness, belt, and boots are painted in a wonderful dusty tan color, and it somehow offsets the badness of the forest ranger green.  Hasbro earns big points for painting the turtleneck red.  Good work, H!

By the way, yojoe.com says that the body (except for the head and lower arms) are resculpts based on the ’82 figure.  Hasbro did a good job on this.  I didn’t notice and probably never would have.  Yojoe.com also put a sidearm in the package (shared with Flash and Rock ‘n Roll) as belonging to Short-Fuze.  I must not have agreed at the time, although looking at the package it clearly was intended as for Short-Fuze, because it didn’t make it to the storage tray.

The obvious accessories I was smart enough to properly retain were the backpack and the mortar.  These pieces are frustrating.  In 1997, the correct ones were released in the Stars and Stripes Forever set.  Seven or eight years must be a long time in toy world, because this Short-Fuze came with a Roadblock backpack and a mortar.  I had always assumed it was a Downtown mortar, but it’s not.  It’s also not a Sub-Zero mortar.  Was it a new one made just for this Short-Fuze?  I don’t know.  I would have preferred the ’82 gear again, but these are acceptable.

Speaking of accessories, Short-Fuze didn’t have a helmet/visor.  This figure was obviously designed to showcase its headsculpt, but that shouldn’t have precluded a helmet/visor.

After 1983, Short-Fuze didn’t see much comic book usage.  One of his few additional appearances was in issue #25, when he was part of the transport team that took Storm Shadow to Alcatraz.  That uniform featured a collared button-up shirt with pockets.  Given that Hasbro made some obscure comic pack versions (karate gi Scarlett or astronaut Flash or undercover Grunt), this might have been an interesting choice.

Instead of nailing Short-Fuze’s comic book look, Hasbro took small missteps.  Sadly, they’re ones that add up and detract from the figure’s overall quality. 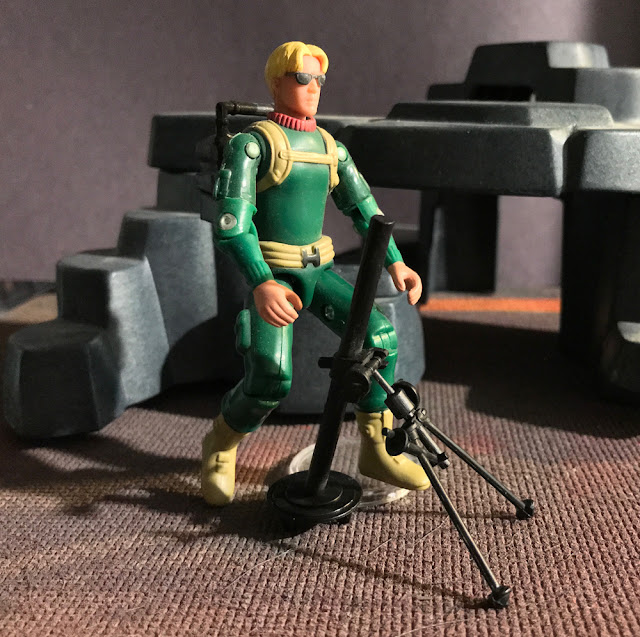 Posted by Robot_Sonic at 2:45 AM
Email ThisBlogThis!Share to TwitterShare to FacebookShare to Pinterest
Labels: 2005, Comic Pack, Past Nastification, Short Fuse, Short Fuze