In 1983, the G.I. Joe line began to diversify from it's purely military beginnings. The team got a few specialists and the toy line we all love really began. 1984 continued this trend with what I call the "Swamp Year". Six months of the comic were primarily set in the swamp. The Joes got the incredible hovercraft and the S.H.A.R.C. while Cobra got Zartan and the Water Moccasin. The pilot of the Water Moccasin, Copperhead, is a truly unsung figure. If he was ever introduced in the comic, it was long after all the other toys from 1984 had been. Copperhead was one character that was never developed on any level of Joedom. He is as forgotten as they come. What's truly odd, though, is that the Water Moccasin is a highly regarded vehicle. How a vehicle remains popular while its driver anguishes in obscurity is beyond me.

Copperhead was one of my most used bad guys. I love the swamp. Most of my early play was centered around it. (My father, to this day, laments about how I dug a huge hole in our back yard and filled it with water just to have a swamp in which to play.) I made him a bounty hunter who worked for Cobra. I gave him tons of accessories and took him everywhere. In fact, I think my fascination with brightly colored figures stems from this original Copperhead. The bright greens and contrasting blacks made for an aesthetically pleasing figure that was just fun to own. My original Copperhead is in terrible shape. He is intact, but has almost no paint left. He shows all the wear that makes me want to keep him around. The one you see below is a recent purchase to allow my original to enjoy retirement.

As far as characterization, I never did too much with Copperhead. While he was fun to have around and use, he was never all that deep. Copperhead was what you saw: a soldier and fighter who was interested in a paycheck first and foremost. There was no time for morality or any other distraction in his pursuit of more cash. So, while the character was very good at fighting, he wasn't good at much else. He wasn't a Dreadnok by any means since he had some intelligence. But, Copperhead wasn't going to fly a Rattler, either.

The Copperhead mold hasn't lead the interesting life of some others, but it is well-traveled enough. The figure was first released in the US in 1984. That figure was then also available via mail order in 1989. (It stands to reason that Hasbro either used the mold to create some overstock figures for the mail away or already had them left over from 1984/1985 to create this mail away figure. Bagged Copperheads were actually available as late as 1999 from Hasbro Canada. So, Hasbro probably just produced a large quantity of them and left them in a warehouse for years as overstock.) Then, the Python Patrol figure was released in 1989.

Around 1990, the Copperhead mold appeared in Brazil. There, he was released in colors similar to this Python Patrol figure as Pantano. (Just a note, there were actually 2 figures named Pantano released in Brazil. One is the PP Copperhead and the other is made from the 1993 Iceberg mold. They are not the same character, though they share the same name. As if this all isn't confusing enough!) That was the last time this mold was in production. That begs the question: where is the mold now? While it's impossible to determine, a quick look at Pantano's contemporary releases might give us some clues. The Brazilian Python Patrol featured Pantano, Tocaia (PP Crimson Guard), Gatilho (PP Airborne) and Relampago (PP Ripcord). None of these molds have appeared anywhere since their release in Brazil. Among Pantano's other contemporaries, though, are a number of figures who have also subsequently appeared in India. The Pantano cardback features 21 figures. Of these, 10 have since been released by Funskool. None of them, with the exception of the V1 Low-Light have appeared in the US without also appearing in India. So, it really is impossible to determine the whereabouts of this mold. Most likely, it is still locked away in some warehouse down in Brazil. Regardless of it's location, though, I don't think many collectors would be excited about a repainted Copperhead. New sculpt, maybe, but this old mold doesn't offer much that hasn't already been exploited by the various color schemes.

Copperhead came in two distinct variations. The easy to find light green version is shown below. He also came in a darker green or blue color. This figure is, in my opinion, one of the 20 or 25 rarest Joes. I remember one of my friends having one, and seeing one in a store but being unable to convince my mother to purchase it for me just so I could get a figure I already had but with a different paint job. The blue gloves figure almost never appears for sale. He was only shipped in early releases of the Water Moccasin and was never available in any other avenue. He is an easily forgotten variation, though, and you don't see many people looking for the dark gloves version until one appears for sale. At that point, let the frenzy begin.

Copperheads aren't too tough to find. He was available for many years as a mail in and, in its day, the Water Moccasin was a very popular vehicle. Copperheads are a weird figure, though, in that the price fluctuates constantly. Sometimes, bagged specimens reach stratospheric heights. Other times, you can get them for nothing. Some people think this figure to be rarer since he is so old. Others know about his extended availability and won't pay outrageous sums for him. With this figure, especially, it is important to shop around before you buy one. Loose figures, though, tend to stay in the mid range. Since he had no accessories, Copperhead isn't as desirable as other, accessorized vehicle drivers from his era. However, it is hard to find a Copperhead with no paint blemishes. For some reason, his paint chips easily. Perhaps this is why the bagged figures can reach such a premium. Anyways, Copperhead is a fun figure to own, despite his lack of notoriety. 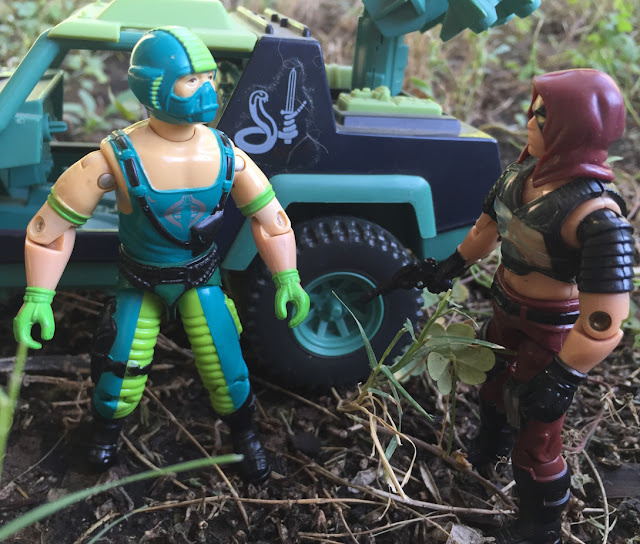 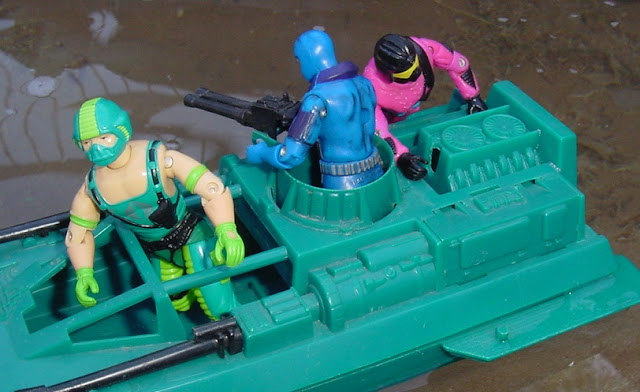