Most collectors cringe at the prospect of a highly regarded figure being remolded with neon orange and green highlights. In 1991, Hasbro did just that with the new version of the Bat. I have always thought the original Bat a highly overrated figure. I hated the idea of robot troops. I used them as total jokes. I just couldn't justify robots being a highly effective fighting force. As such, my original Bat was never used. When I first saw this incarnation, I was interested, but not to the point of wanting one. I managed to pick up a carded sample and the figure started growing on me. By the time I finally added a loose specimen to my collection, I was salivating for the opportunity.

I love pilot figures. The thing about the Joe figures was that there were many, many figures who could be turned into a cool pilot by simply adding a gas mask or helmet. Cobra never had such luxury. The Strato Vipers are awesome and will probably see themselves featured here someday in the future. They Gyro Viper was also a great figure and everyone already knows my feelings about the Aero Viper. These guys, though, made for great fodder pilots. Wild Weasel never did much for me. As such, I was searching for a figure I could use as the ultimate pilot in the Cobra armies. When I got the Bat, that dilemma was solved. This guy makes a perfect pilot. The helmet is tight to his body and the armour looks like a flight suit. It also makes more sense for a pilot to wear neon colors than it does a battlefield unit. (I also explained the gaudy colors by saying that this guy is so good, he wants people to know who it was that shot them down. For that reason, he wears a uniform that is instantly recognizable.) Once I had this figure, my Firebat from Hasbro Canada finally had a worthy pilot.

The look of this figure is just awesome. I think the head looks regal, almost to the point of cockiness. That is the perfect trait for a pilot. Usually, figures that come with molded helmets don't look very good. The helmet is too big and makes the figure appear out of proportion. This figure is the opposite. If anything, the head is too small and narrow. Still, it is very cool to look at. When you attach his hand, rather than some laser thing, and use this figure as a human, he becomes an integral part of any collection. The figure is just too good to be relegated to some loser role as a robot that bursts into flame when hit from behind. (When I was a kid, the ultimate indignity was to lose a battle to Sgt. Slaughter. The Bats, along with terrible figures like Raptor and Big Boa, continually did this.) This figure is my ultimate pilot. The joes currently have a major bounty on his head. He's just too good, though, for them to shoot down. (The fact that he uses discretion as a better part of valor has also kept him from overextending himself.)

This is another figure that only sees any time in my collection because of what I made him. Had I been confined to the robot role, this figure would never see the light of day. (Much like my original Bats.) Since I had so much fun creating the character, though, this guy is one of only a handful of figures that is never put away. In fact, he spends most of his time at the helm of the Firebat. (I prefer to use smaller planes. They are much easier to play with than their larger counterparts. The large aircraft, though, do make for better display and diorama pieces.) As my collection has grown, I'm continually surprised by which figures seem to get the most action. Figures I really wanted often end up relegated to the storage bins while figures that were just throw ins in some lot, like this guy was, end up in a place of prominence. It just goes to show that imagination has far more play value than any toy could ever hope.

After this figure was done at retail, it did not appear again until 2003. At that time, Hasbro pulled out this mold, colored it more closely to the V1 BAT and offered 3 of them along with 2 additional '91 BATs in a translucent, red color scheme and a newly painted Overkill for $15 at online dealers. Collectors responded to these sets with a collective yawn and you can still buy the sets for retail three years later even though they figures were cheaply priced and were of very high quality. It was the second great collector failure in the line's relaunch and the one that was probably the best harbinger of things to come.

This is the space where I normally tell you how tough 1991 figures are to find. The Bat, along with Red Star, however, is an exception to the rule. For some reason, everyone has those two figures. As such, you can get them easily and cheaply. I don't know why it is, but these two figures are everywhere. Lots of all '80's figures will have those two as the sole representatives of the '90's. It makes no sense, but does give you the opportunity to build armies. I've picked up four Bat's in the past year and a half. I haven't been looking for them, they just seem to always come in whatever lot it is I'm purchasing. Still, you should take advantage of that availability now. There may come a time when you will wish you had seized the day and bought those plentiful Bats before they disappear into army builders' collections.

I use this guy far more than the original version. If you like this figure, let me know. 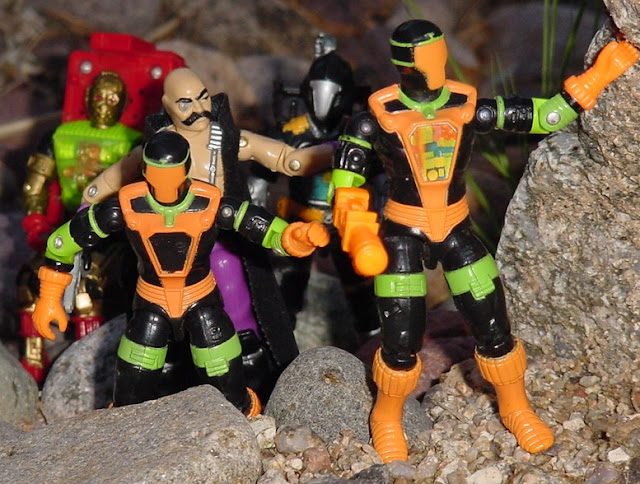