Normally, I only showcase obscure characters, or less known versions of popular characters here. However, I have finally had to break the tradition and showcase the character that I consider to be one of the ultimate villains of all time. Cobra Commander is such a presence in all facets of Joedom that there is no way I could not showcase at least one of his versions here. I have chosen the 1993 incarnation of the character because it is a remake of the uniform with which I always associated old Snake Face. The regal figure that appeared in G.I. Joe #1, with the mysterious hood, honorific cords, subtle weapons and commanding personality is the only way I could ever see Cobra Commander. While I love the original figure version, with the battle helmet, that is not how I wanted my commander to be. The Hooded version that came out in 1984 was good, but the figure is too small and makes the commander seem wimpy. I never liked the 1986 Battle Armor version. The 1991 version is a cool figure, but not one that I could associate with the leader of the world's greatest terrorist organization. The Sonic Fighter version had the right uniform, wrong color, and the terrible backpack. In 1993, though, they finally got it right.

This version is the ultimate Cobra Commander. He is a larger figure that fits with my vision of what the commander would be like. He has all the trappings of the original uniform. (Some of the later Cobras did an excellent job of recapturing their original uniforms. The 1992 Destro is, in my opinion, a far superior figure to the original.) This figure's one shortcoming is his arsenal. He comes with a lame weapons tree that doesn't have any single item befitting a man of his stature. However, this is a problem easily overcome. Some people don't like the black color. Me, I think it is far better. The blue they cast the original hooded Cobra Commander in was not dark enough. My memory of the commander's initial appearance is that he was in a uniform that was almost black. For that reason, I think the black is perfect. I also love the evil eyes. Those are what makes the figure. I always thought that if you were unlucky enough to actually see the commander, you would definitely see the hatred in his eyes.

The thing that's great about this figure is its subtlety. The figure doesn't overpower you with fancy trappings and extra weapons. He just has a basic uniform that showcases his importance while not impeding his ability to fight. If only they had released a Battle Helmet Cobra Commander head that was swappable for this body. Even better would have been a removable helmet that would have fit over his hood. They also could have used the head from the 1994 Star Brigade Cobra Commander (Itself a great figure!) and had both a hood and a helmet that would have snapped into place. Why they didn't think of something like this for the 1997 or 1998 lines is far beyond me. Still, this figure rocks. I had pretty much abandoned the notion of Cobra Commander. My hooded versions are all trashed and my Battle Helmet versions just don't look right when stood among the newer figures. Once I got this guy, though, all I could think about was G.I. Joe #100. The simple words, "I'm back." are enough to describe how this figure will fit into my new story lines.

The one lament I have about the Cobra Commander character is that he was never evil enough. In the first issue of the comic, he slaughtered an innocent fishing village. This should have set the tone for the evil Cobra would attempt. For the first few years, the comic kept things going. The cartoon, though, didn't keep this up. The type of violence necessary for this malevolent a character would never have passed network censors. This sanitizing spread to the comic. Cobra became so immersed in Cobra Island and international politics that they lost their flair for the simple evil deeds that they were built upon. Of course, there had to be a way to work the whole Serpentor character into the story lines. I think this was the primary reason the commander lost his edge. When he returned in issue 100, though, the evil came back as well. Unfortunately, it didn't keep up. The commander from issue 1 would have reveled in the fact that the SAW Viper killed those joes. His only lament would have been that he was not there to see it. By losing this edge, Cobra became boring. I think that was part of the reason the comic series lost its flair. The toy line had made it impossible for Cobra to continue its assault against America. (Something I hope to explore in my work in progress fan fiction.) The science fiction element had taken away from the basic terrorist organization whose goal was to destroy the American way of life, as long as they got rich in the process. (I wonder if anyone ever pointed that contradiction out to the commander?)

These guys are hard to find. Many people feel the same as I do and count this figure among the few 1993 or 1994 figures they have in their collections. Like most of the last two years of Joes, though, this guy can be found relatively easily on the card. Those are not usually too expensive and are worth opening if that's the only way you can get this figure. I remember the first time I saw there was a new Cobra Commander available. I searched everywhere for him, but couldn't find him. I then spent over a year looking for a loose sample. When I finally got one, I was not disappointed. This is a figure, though, that should start appearing with greater frequency in the next couple of years. When it does, I highly recommend taking advantage and adding him to your collection. You will be glad you did.

I actually first acquired a carded version of this figure. The only reason I didn't open it was because the card was so pristine. I then finally managed to get the loose sample you see here. Imagine my shock, though, when I went to scan in the carded image and found that it had been damaged in my recent move. The horror!

Whew! That's a long one. Still, the commander is the one character I think worthy of this type of analysis. If they ever do bring the Joe comic back, I hope it is from Cobra's point of view. Seeing the inner workings of the Commander's mind would be far more interesting than a bunch of carbon copy Snake Eyes' out to save the world. 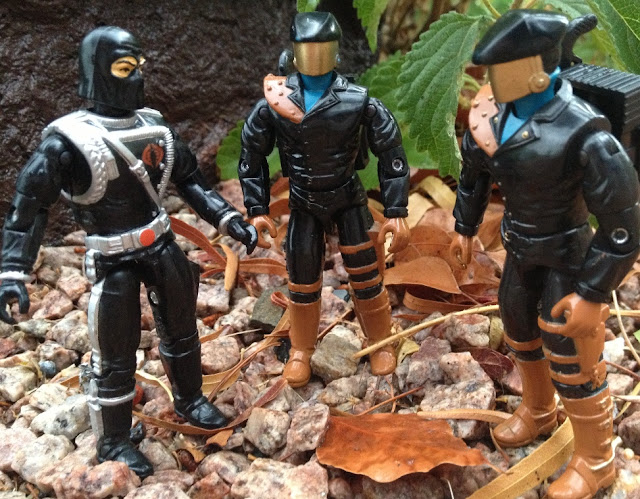 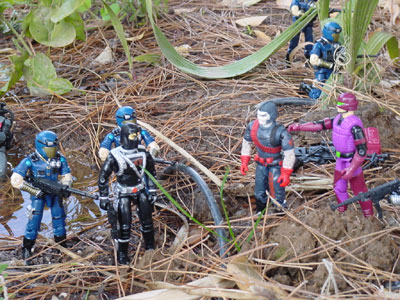 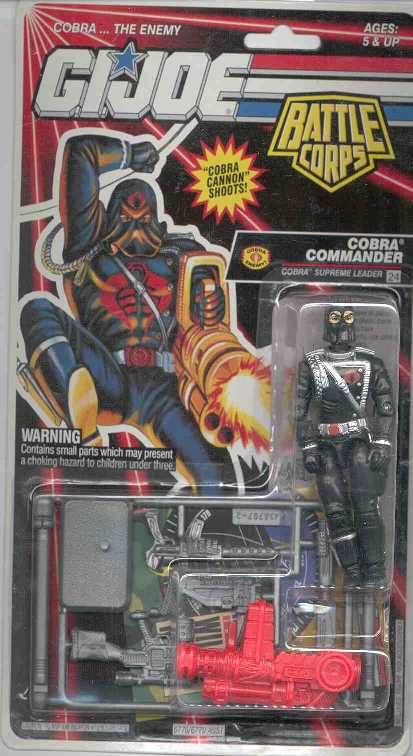