When I first saw this guy, I couldn't believe they had bastardized the good General Flagg name and actually given it to anyone who didn't have the traditional green uniform with the mysterious sunglasses. After I got over that initial shock, I realized that this guy is a very cool figure. In the winter of 1992, I went looking for some Joes. I bought three, the 1992 Destro, 1992 Bulletproof, and this guy. I don't know why I took to this figure. I just liked the subtle look and the cool accessories. He is a cool military looking figure that came out in a year of oddities. While this guy certainly isn't General Flagg in my little world, he is a character worthy of great respect and admiration. He had the look I always wished Hawk had been given. While the '86 Hawk is a great figure, I just can't use him as the leader. With this figure, I don't have that problem.

I mainly bought this guy for his gun. I thought it was awesome. I am still of that opinion today. Of course, the gun lead me to a very cool figure. Many of the 1992 figures are overlooked. You will notice that I have profiled several of them. 1992 was the beginning of the end. G.I. Joe had lost its focus and was becoming too splintered a toy line to maintain any type of child interest. The enemy picture was blurred with all the subsets. The simple Joe vs. Cobra formula that had been successful for so many years was taking a back seat. Since this was happening, many old time collectors left the hobby. They figured the line had run its course. Things like the Eco Warriors (still a subset I enjoy) were the final straw. Unfortunately, this kept them from enjoying many figures like the Flak Viper and this guy. They are just basic figures that don't have the trappings of many of their contemporary releases. They enjoyed subtle colors, basic molds, and minimal accessories. The few figures in the 1992 line who followed this formula stand up against all other years without any shame. Now, if only the collecting community would give them their due.

I like Flagg's head. It looks like a tough, no nonsense leader that would keep the Joes focused. His uniform shows some prestige, but isn't overly flashy and gaudy. This is still a guy who gets dirty with his men. I have always found uses for him, from the first minute I got him. I like to use the 86 Hawk as a younger soldier. General Flagg allows me to do so without having to appoint some other jobber figure to the leadership role. He is another figure I feel is "free". This incarnation was never used in the comic. As such, I can make him whatever I want. Therefore, I have dubbed him the field commander of my Joes. I don't use him as a general, but he is the highest ranking field officer who sees any time in the field.

The Flagg mold got good use. After the '92 and '93 versions, most of the mold was utilized to make the great Chinese Major Bludd figure. After that, the mold was sent over to India where Funskool produced it from 1999 until 2003. After that, the mold was likely returned to Hasbro and is probably available for Hasbro's use. At this point, Hasbro has not used the mold, though they finally did offer a General Flagg figure molded in the likeness of the original comic book character. But, this figure used an entirely different mold. Truth be told, while I like this mold, we've gotten it in 3 great color renditions around the world and there isn't much more that could be done with it. Some of the parts would be cool to see on other, newly amalgamated figures, but I don't think we really need another exact copy of this General Flagg figure.

Flaggs aren't too tough to find. The 1993 version can be a bit problematic, but is still fairly common. You can get these guys mint and complete for next to nothing. Most of the post 1991 Joes aren't too expensive and can be found very easily mint on the card. Hasbro cleaned these guys out as the Joe line died down. Many of the 1992 and 1993 figures were available at clearance outlets well into 1995. As such, they are plentiful and cheap. Now, though, is the best time to fill out those gaps in your collection. Joes seem to be getting substantially more expensive. As the earlier years peak, these later 1992-1994 figures will start to become more attractive to collectors. It wasn't so long ago that 1989-1991 figures were plentiful and cheap. Sadly, those days are gone. Someday, we will look back at the 1992-1994 lines with the same fondness. 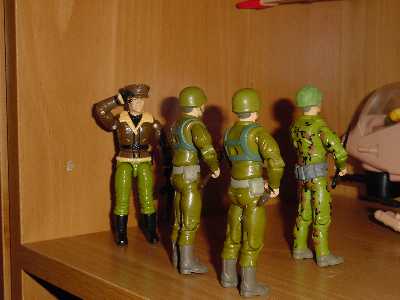 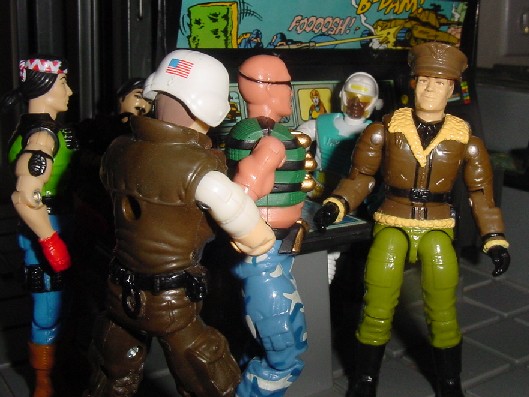 Posted by Robot_Sonic at 1:26 PM
Email ThisBlogThis!Share to TwitterShare to FacebookShare to Pinterest
Labels: 1992, General Flagg