In 1991, Hasbro took the subset idea to ludicrous extremes. They introduced all sorts of subgroups, some better than others. One of the lesser seen groups that was released the year before and ushered in this wave of subsets was the Sky Patrol. These guys were all reworks of existing molds, but with new heads. They all came with a silver parachute that really "worked". Needless to say, any one of these guys was pretty much indistinguishable from any other, especially for parents. As such, the group was not a rousing success and we are left with a difficult to find subset. It does help, though, that most of the figures in this group are not all that cool. The main exception, though, is Airwave. This guy is a great figure that just screams for all sorts of uses. From the first moment I got him, I have been coming up with new ways to use this guy. He has a great sculpt, cool accessories, and a good color scheme. What more can you ask for from a figure from a generic subset?

Airwave is a resculpt taken from the mold of the Motor Viper. The uniform actually works better in these colors. The hoses look like they would go to a paratrooper. The reappearance of the double leg holsters also makes this guy that much cooler. Airwave's head is nothing special, but he does come with one of the better helmets in the Sky Patrol line. The helmet fits tight to his head, but the visor covers his face. With it down, the figure looks like a futuristic security guard you always see in bad sci-fi movies. His heavy weapon, one of my favorites from my first version of it that came with the 1993 Leatherneck, is fantastic, though the silver color is a bit much. Replacing it with the aforementioned black version helps quite a bit. Airwave holding this gun, with his visor down has become my heavy duty security and riot troops. They come in when things get very hairy, be it a prison riot, jailbreak, or good old fashioned urban assault.

I avoided the Sky Patrol figures for quite a while. I didn't think they were cool enough to justify their price tag. If you've been to my Goals page, though, you will notice that I wanted to add two of these guys to my collection this year as part of my master plan of diversifying. I lowballed a bid for Airwave and ended up winning him. (It was still more than I like to pay for a loose figure, but we all know that I'm cheap.) I'm glad I got him, though, as this is a very cool figure. Needless to say, when my Joe moratorium wears off in May, I am going to go after a couple more Sky Patrol figures. I think Airwave is the class of the bunch, but there are a couple of others that look good as well. For a group of figures that are basically just retreads, I think Hasbro did well with the Sky Patrol. As an separate subset, though, is where I think their greatest failing came. One or two of these figures would have been perfect. A whole cadre of them starts to blend together. The beginning of the downfall of the line occurred when Joe lost its identity. Subsets like this should have been paired down and incorporated into the main line of figures. The parachute should have been used as a selling point for one figure, not an excuse to raise the retail price of several. I'm sure, though, that the subsets seemed like a good idea at the time. Now, well, the sentiment in the collecting community should be enough to tell you if they were successful or not.

Sky Patrol figures are tough to find and everyone knows it. It is no secret that they are among the harder non variation Joes to find. This, though, doesn't mean deals can't be had. Less than 2 months ago, I got this guy, mint and complete for about $9.00. That price also included his full backer card. If you are willing to look, these guys can be found, especially if you are willing to look through lots. Many people had one or two of the Sky Patrol figures, but not all. If you are willing to piecemeal a set together, you won't go overboard with spending. If you want them all at once, be prepared to shell out some bucks. Airwave, though, is well worth the money. I don't regret what I paid for him at any time. Though they are just primarily remolds, the Sky Patrol figures are still cool ones to add to any collection. 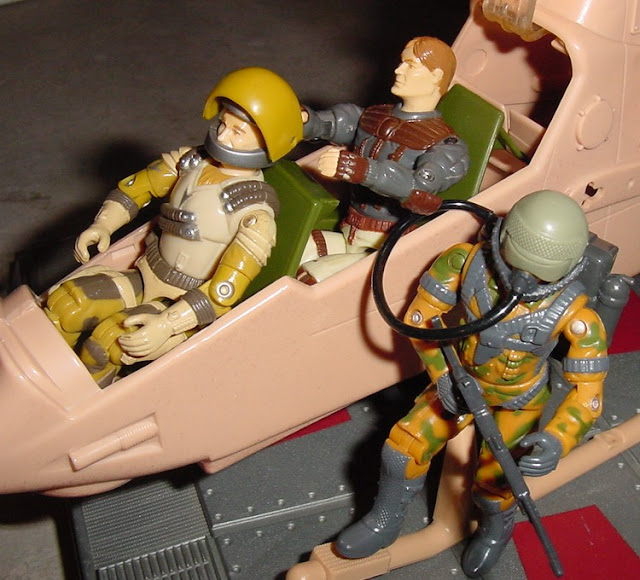