1994 was not a year that is fondly remembered by many Joe collectors. The Star Brigade line is looked upon with such udder disdain, that those of us who actually like it are often ostracized and ridiculed. (Okay, I am exaggerating, but the line is usually not well received.) Actually, though, the 1994 Star Brigade line is full of awesome figures. Many of those '94 astronauts are among the best figures produced in the line. The colors make sense for space exploration. While I'll leave the debate as to whether space exploration should fall under the Joe line or should have been given its own to another space, the figures, when taken as themselves, are very, very good. The Blackstar is no exception. All of the figures in this line have their attributes. I still think the best head for a custom Cobra Commander or custom Cobra troops is the 1994 Cobra Commander head. It is just awesome. It is a pity that it isn't more readily available.

While this guy does suffer from "Big Shoulder Syndrome", the mold is very good. The colors are a bit much for many people, but he works for me as a pilot or diver. I also have a carded sample of him where you can also see this guy's card art. I feel most Joe figures look very good on the card. The time spent on the artwork makes for a nice display piece. Of all the figure lines, though, I think the 1994 Star Brigade figures display the best. The subtle colors blend nicely and make a very aesthetically pleasing diorama. I'm actually sorry the line didn't continue. Sure, I wasn't too keen on the Manimals, but some of the Lunartix aliens and other astronauts would have been very cool. Unfortunately, I'm in the vast minority when I make statements like that. Most collectors were ecstatic that the Star Brigade line was killed off. They are just unhappy that the rest of the line was killed with it.

The one problem I have with this figure is that he won't fit into many of the earlier vehicles. I would love this guy to fly one of my Cobra planes. Unfortunately, he won't fit into the cockpits of many of them. Still, this guy is a lot of fun to have. I use them as Cobra deep sea divers. Since I don't have a BUGG, I don't know if he will work in there. The bulky suit, though, makes him look like a diver or rescue trooper. Had his torso been a bit smaller, I think this figure would be much more popular. He looks a bit out of proportion. The head, though, is fantastic. At some point I will have more time to customize figures. When I do, the Blackstar will be one figure that will be experimented with. The head and legs are too cool to not go use for something. This mold, though, proved that Hasbro was still capable of making good figures. They didn't try too hard in 1994, but when they did, they could still deliver figures that were worthy of being held in high regard in comparison to the rest of the line.

The Blackstar saw just a short production run in 1994. After that, the mold disappeared until 2005 when Master Collector used it to make their exclusive Steel Brigade figures. In that capacity, the mold worked well. Though, I do feel that this mold really should have been used for another Cobra character. The detail and design are such that the mold deserves a more prominent re-use. But, now that the heads have been stolen into the Steel Brigade, it is doubtful that any future appearance of the Blackstar mold will have as much attention heaped upon it by collectors had it not been used on those Convention figures.

1994 Star Brigade figures are very easy to find carded. Loose is a different matter. The Blackstar, though, is among the easiest 1994 to find in that state. He was released in series 1 and more people purchased them. You can usually find this guy in lots, though getting him complete can be a challenge. Still, he is nowhere near as hard to find as the series 2 figures or even some series 1's like the 1994 Roadblock. You can get Blackstars carded for about $6 or $7. Loose, he runs much less. I think, though, that loose samples will start appearing more frequently and allow army builders to do so. The carded figures, though, are starting to appear less often than they did only a year ago. Now may be the time to snap these guys up. I know that I got both my carded and loose samples for nothing. You can still do that, but had better hurry before others start discovering the gems in the 1994 Star Brigade line. 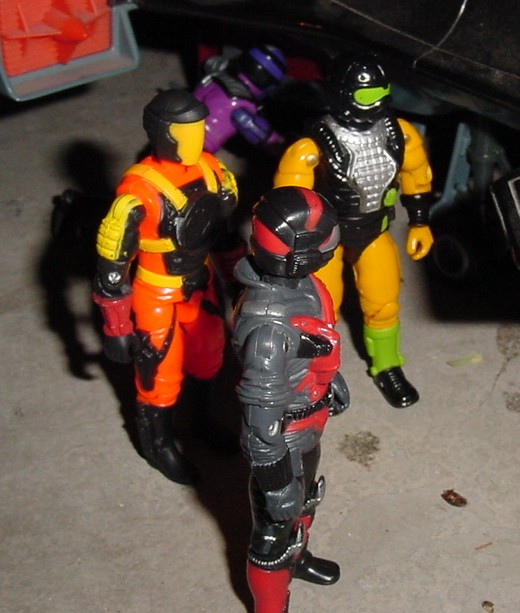 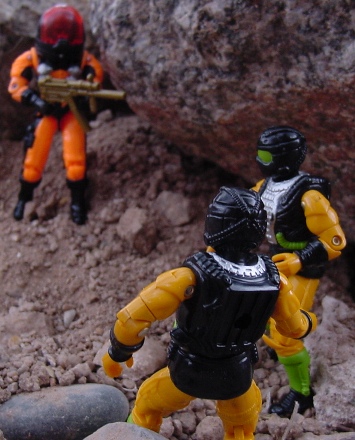 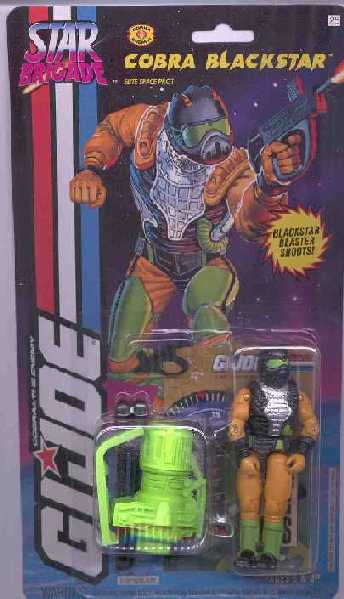