The Joe figures I like come in two camps; crazy neon figures that no one else could ever like and the basic military figures whose molds are very realistic. Of these two, Recoil falls into the latter. Of course, this group is also the group that most Joe collectors enjoy the most. (Aside from accumulating Cobras, that is.) This guy is a good, basic army figure. It's a shame he was given sky blue accessories. Those alone are enough to sink this guy off most collectors' radar. With a little creative outfitting from your weapon reserves, though, this figure becomes highly usable very fast. The gun you see with the figure below is from a Python Patrol Copperhead. This weapon works excellently with this figure. Also, the most common version of the Steel Brigade figure came with a black version of Recoil's gun. These can be somewhat of a problem to track down loose, but also work wonderfully with this figure.

In 1990 or 1991, I was babysitting for some kids down the street. I was out of toys at the time, but G.I. Joe was their favorite toy line. We had a great time playing with all their new figures. The two that stick out in my mind are Big Ben and Recoil. I thought they were both very cool, realistic figures. I almost broke out of the high school stigma and went looking for a Big Ben. With much regret, I now must admit that I never did. At least I have been able to get a couple of each of those figures in the last few years. Recoil was just a lot of fun to play with. He has an excellent color scheme, the cool pack with a antenna, and a awesome gun mold, if the color is terrible. Since we were out in their mother's flower gardens, we had a great time with the figures that were at least loosely based on military personnel. For this reason, when I had the opportunity to acquire a Recoil in my later years, I jumped at the chance.

My ultimate goal is to have about 6 of these guys. Three will be armed with the weapons you see below, one will have the recolored version of his original accessory from the Steel Brigade figure, one will have a grenade launcher and shotgun, and the leader will have Frostbite's gun. This will then act as my first response team. Unfortunately, I'm only about 1/3 of the way there. I've changed my collecting focus this year and am no longer after acquisition. Now, I'm trying to diversify my collection. As of today, I have 724 figures with only 377 being unique. That's about 52%. Once that ratio climbs back to around 60%-65%, then I will readjust and start building armies again. (Of course, I will still build Cobra armies now. My Joes of whom I want multiples will have to wait unless they are part of a big purchase that includes several figures I don't have.)

The Recoil mold didn't stop with Hasbro. After this figure was discontinued in 1990, the mold went down to Brazil. There, the chest, head and arms was released in the Force Fera subset as a figure named Tigor. Tigor is bright red, but actually works because of the way his colors are blended. He is a more popular Brazilian exclusive but isn't too hard to find since he's fairly common among American collectors. After that, there is no sign of the Recoil mold. It is likely that it died in Brazil. That's a shame as the figure could be well done in desert, night or another forest motif.

Recoils aren't too hard to find. He was released in 1989 when Hasbro was still pumping out figures. Since the Cobras from that year steal most of the thunder, the Joes have remained cheap. The problem is that you often get the terrible blue accessories. Still, this guy is good to have. If you get his pack, you can re-equip him with a more aptly colored weapon and have an awesome figure. I like him as an army builder. He also makes for good custom fodder. Like most of the late '80's and early '90's Joe figures, this guy is still very plentiful and inexpensive. If you are into army building, now is the best time to begin. Even if you only want one of each figure, Recoil is fun to have and looks good in many situations. Take advantage of his availability now, before people like me start scooping them up and they disappear from the second hand market.

I've got a couple of these guys. I use them as special forces soldiers. I'd like a few more, but they're something I want as a throw in, not a main trade. After I build up a few more unique figures, then I'll go back and buy up some duplicates.

What's your collecting strategy? Email me. 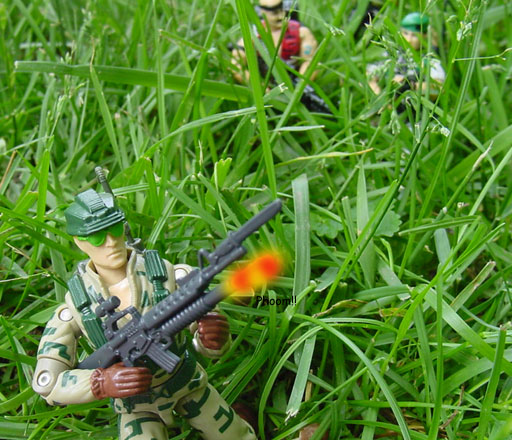 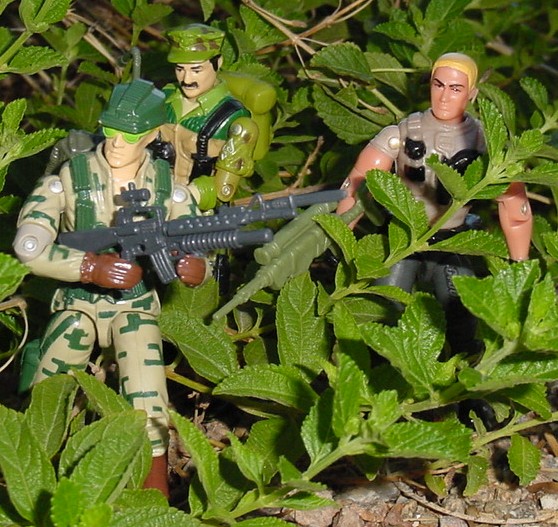 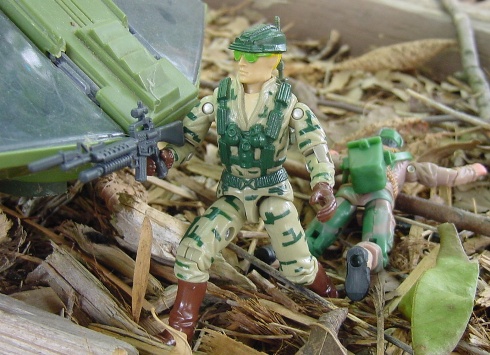 Posted by Robot_Sonic at 4:33 PM
Email ThisBlogThis!Share to TwitterShare to FacebookShare to Pinterest
Labels: 1989, Recoil