In 1995, Joes were mostly gone from the retail shelves. There were, though, a few pockets of them that could be found. On summer afternoon, I went to a local Meijer store. They only had two carded Joes, a 1994 Snow Storm and a 1993 Colonel Courage. They also had, though, the Blockbuster tank. It is a huge, Arctic tank that is very heavy, but very fun to own. The driver of this vehicle is Windchill. This is Windchill's second version, but I think it his best. When I first got this figure, I was hooked. The Blockbuster has a command gunner's seat that just makes this guy look regal. The green jacket doesn't really fit in with an Arctic vehicle, but the color is nice and it can work as the Blockbuster appears to be a sub Arctic tank that actually has wheels rather than treads or skis.

My Blockbuster is driven by a 1993 and 1994 version of Snow Storm. Windchill takes the command seat and various other Arctic troops, including the special commando unit that is made up of 1998 Fireflies, flank the tank on all sides. It is actually a very nice vehicle as it holds about 10 figures. I like vehicles that can be used as playsets. I find most Joe vehicles to be too small to really have fun with. Some, like the Hovercraft, Hydrofoil, and Tomahawk chopper are great. The Blockbuster falls into this category. A couple of Wolves accompanies by a phalanx of Snow Serpents makes for an excellent enemy to a single Blockbuster armed with some hearty troops. Sure, the Blockbuster has no basis in realism, but it makes for a very fun toy. For that reason, it has found a nice place in my collection.

When I first got this figure, I had no idea that it was a repaint from an earlier mold. I was just impressed by how it looked. At that time, I was leery of purchasing figures I couldn't see. In fact, I passed on the Star Fighter and Detonator because I wasn't sure of what the figures they came with looked like. By 1996, I was past this and was buying every Joe I could find. When I got the Blockbuster home, I had to sneak it into my parents' house. This is a much more daunting challenge that it would appear as the Blockbuster's box was immense and heavy. There would be no smuggling this under a summertime t-shirt like I could a simple carded figure. I managed to get it into the house and was pleasantly surprised when I opened it. The vehicle was fun, but the figure was fantastic. He came with a cool gun and had a nice color scheme. Windchill quickly joined my then small army of newly purchased Joes as they fought against Vipers and Crimson Guard Commanders. He became the leader, not because of any filecard or official notice, but because he looked very commanding sitting in his gunnery perch aboard his tank.

Windchill is the type of figure I tend to like. He has a basic mold and color scheme that is not too complex or overwhelming. He is a relatively obscure character who never really appeared in any measure of official Joedom. Finally, he has good accessories and just complements the look of many other figures. All of those ingredients add up to a figure that will almost always see substantial time in my collection. They are just more fun to develop and flesh out than the predetermined characters. Those guys are great, but sometimes their personalities are limiting. When you have a new character who can have any background you want, the play possibilities are endless.

Don't let production numbers about this figure scare you into a high dollar purchase. Some have put the total run of Blockbuster tanks at around 10,000. Whether or not this figure is accurate, though, is irrelevant. This figure was produced in much higher volumes. After the Blockbusters were sold off, this guy was offered either as a mail in, or was going to be offered in some other way. At any rate, thousands upon thousands of bagged samples made their way to the secondary market after the line's demise. I have seen collectors who literally have dozens, if not hundreds, of these bagged figures. The end result is that some dealers will try to scare you into thinking this guy is very rare. That is simply not the case. He is very common and only sells for about $5.00 MIB. That should give you some idea of his availability. Also, he is not a very popular figure and probably never will be. As such, I don't think this guy will ever have the type of interest that would allow him to sustain a high price point. The bottom line is, don't let dealers influence your purchases. There are no truly rare G.I. Joe figures. Check around and talk to collectors. There are hundreds of very nice people on Usenet and available through websites that will take the time to get you the proper information and help prevent you from being ripped off by a fly by night dealer. 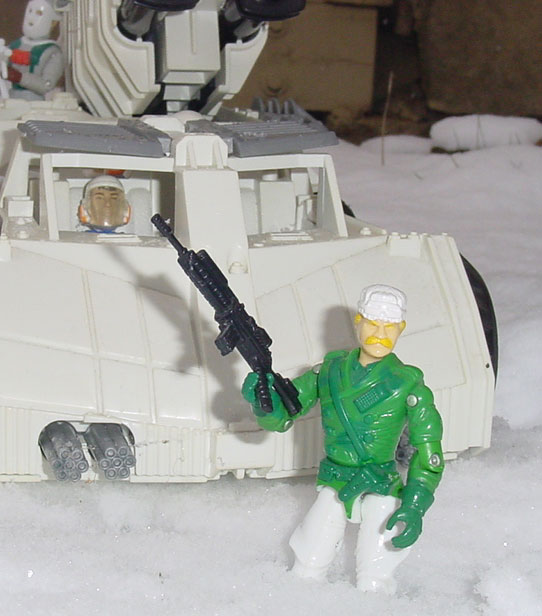 Posted by Robot_Sonic at 2:20 PM
Email ThisBlogThis!Share to TwitterShare to FacebookShare to Pinterest
Labels: 1994, Windchill