I'm not sure about this figure. I know that he was released in either 1989 or 1990 as part of a vehicle drivers mail in set. The set was supposed to include 1985 Heavy Metal and the 1983 Steeler. Instead, people got Rampage. I don't know which figure he replaced. The official dispatch you see in the bag behind the sample below mentions that Steeler has been "reassigned". This would suggest that Steeler was replaced with Rampage. This figure, though, is just a slight repaint of Heavy Metal. Did Hasbro really ship two of the same figure to everyone who ordered this set? Especially when Rampage's file card is nothing but Heavy Metal's with a few things changed. (The file name not being one of them!) Many things Hasbro does make no sense. However, I don't think sending two of the "same" figures to everyone would have flown in the late '80's or early '90's.

Nonetheless, Heavy Metal was an awesome figure. He was the perfect tank driver. I managed to get two of them and used him in the Armadillo tank since it was more versatile and fun to play with. Even when I lost his communication device, I still kept Heavy Metal in my play rotation. Rampage follows the same pattern. Since he lacks the Heavy Metal's face stains, though, I don't think of him as being as gritty as Heavy Metal. I do like the slightly different color green in which Rampage is cast. It's not as traditional military as Heavy Metal, but still looks good. He doesn't come with the communication device that made Heavy Metal so cool, but he does have the gun. I have always loved this gun. I often gave it to other figures. The strap was perfect for Alpine and, later, Hit and Run. I always wanted more of them, but this was a weapon, like Frostbite and Crankcase's guns, that was never offered in any of the accessory packs. Fortunately, I kept mine in good condition and still have two loose examples of this gun today.

I love this mold. The heavy jacket and bulky look makes this guy look like an armour man. He's got the chest holster that looks good on so many figures. He also has that cool helmet that fits so tight to his head. I always wished he could have had goggles to go over his eyes, but the molded pair works for me. I always used this guy as the primary vehicle driver for all my missions. He drove tanks, jeeps, and even flew planes and helicopters. Unlike Crankcase, who I used outside his vehicle, this guy always stayed in his vehicles. He looked great in them, but I couldn't find much use for him outside of his vehicular confines. I now use him primarily as a jeep driver of my CORPS! hummers. He also sees some time in the gunner's seat of my APC. He is just a great vehicle driver that must be used.

I don't have any loose samples of Rampage. Since the figure is virtually identical to Heavy Metal, though, I'll use my Heavy Metal stories for this guy. This is a mold that was just great. All of the '85 vehicle drivers were exceptional. They set the standard for all future vehicle drivers. Fortunately, many of those '85's were available via mail order for many years. You may have gotten a Rampage instead of a Heavy Metal, but the mold and use of the figure is certainly the same. I know I wouldn't have been disappointed had I received both a Heavy Metal and a Rampage in the same mail in pack. I liked my Joes to have generic vehicle drivers. These guys are similar enough that they would have worked perfectly in my scenarios. Now, I would like to someday track down a loose version of this figure. However, since I still have my Heavy Metal's, I am more willing to wait.

This guy is tough, tough, tough to find. I've only ever seen two of them for sale. I got mine for $5. The next week, another sold for $50.00. This guy doesn't appear all that often. When he does, he can go very high, or very low. I like to think that I got lucky with my purchase. Still, this guy is a cool piece of Joedom that very few people know about. Very few people have him. He is not even listed as a normal figure. Many people simply consider him to be a variant Heavy Metal. Since he is somewhat unique, and has a different name, though, I consider this figure to be part of the complete set of Joes.

If you know any more about Rampage, let me know. I'm always interested in information about the figures I profile here: 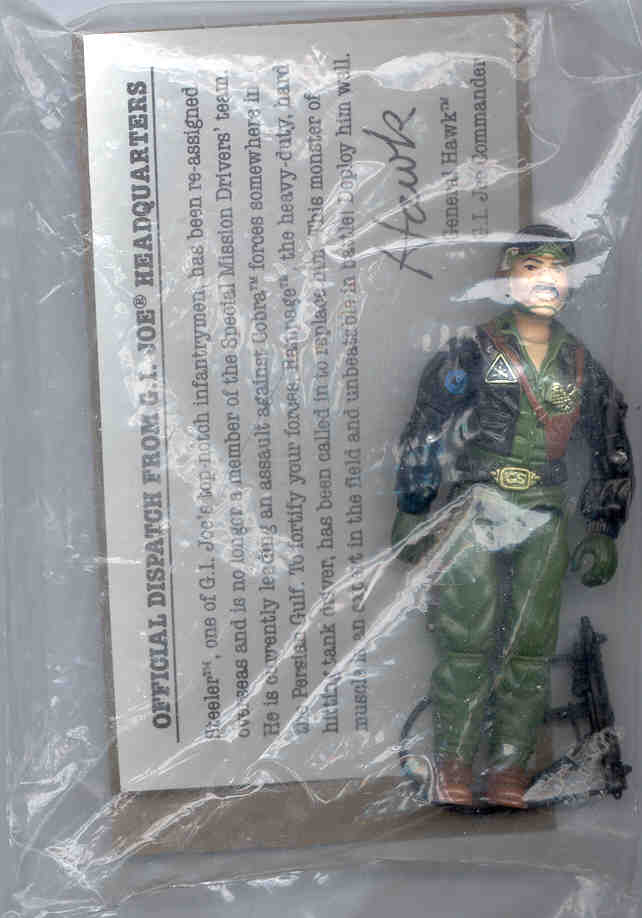 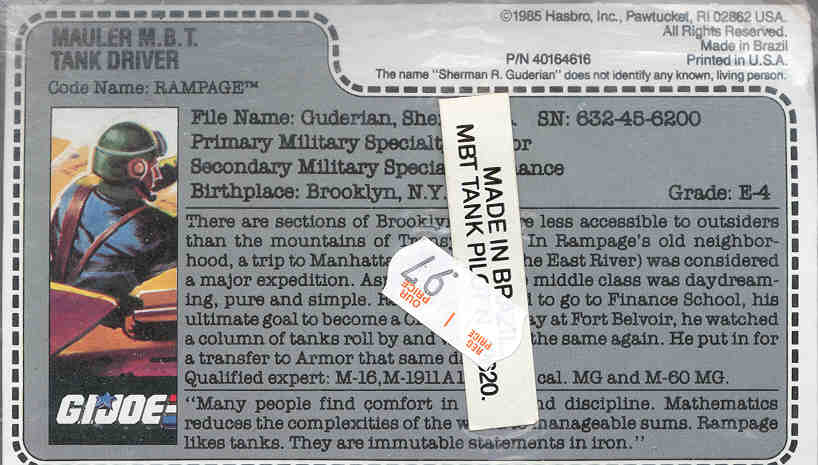 Posted by Robot_Sonic at 9:02 AM
Email ThisBlogThis!Share to TwitterShare to FacebookShare to Pinterest
Labels: Brazil, Heavy Metal, Mail Away, Rampage