In late 1992, I went to a Toys R Us for the first time in years. I was looking over the Joes and decided that I was old and mature enough to buy a couple. I immediately grabbed Destro and General Flagg. I then looked at the card back and saw the picture of the Headhunter figure. He intrigued me to no end. I decided that he was the coolest looking figure available, plus, he had a great name. Of course, they had none for sale. I would not be able to finally get a loose Headhunter until early 2000. When I did, I was not disappointed. These figures are awesome! I managed to get two of the 1992 version and 3 of the 1993 version. They instantly went to the top of my playlist. They were just awesome figures that come with awesome accessories. Sure, they were supposed to be drug dealers, but I have made them Cobra elite street troops who go in and do the dirty work after the Alley Vipers have lead the initial assault. Once you have a couple, you have to find uses for them.

This guy is just too cool for words. He has a nice, basic mold. His flak jacket is very realistic, though the shoulder armor is a bit out there. His head is just amazing. The sleek helmet and the stylish beret make for a figure that looks mysterious. (He also looks like these guys who worked for Silver Sable in old Spider Man comics. I remember how I wished there was a G.I. Joe guy who looked like them. 7 or so years later, this guy came about.) It completely adds to the mystique of this figure as an elite Cobra unit. The fact that he is cast in subtle, dark colors helps make him usable in just about any environment. His shotgun, and the fact that it can be held in the sheath on his pack, are amazing. They are some of the best accessories offered on any figure in the line. I usually give these guys Alley Viper guns and have their shotguns in their packs. They use the heavy rifles while in the streets, but switch to shotguns once they get indoors. You can be assured that Headhunters will play a vital role in any upcoming works of fan fiction that might appear here. They photograph well and look good in any diorama.

As with most figures that I really like, I can't find the words to adequately describe the Headhunter. The thing about him, though, is that he is not too cool to use. I have found that many figures, most notably the 1985 Snake Eyes, are so visually appealing that they are just not fun to use. The figure looks so good that you can't come up with any uses for him that wouldn't be a letdown to the mold. As such, I have many figures on display that I never use. They look great, but play poorly. The Headhunter, though, is not one of those figures. From the moment I got him, he joined the Alley Vipers and Range VipersRange Vipers as the most prominent Cobra troops in my army. He works perfectly with the urban assault story that I currently find so appealing. Needless to say, this is a figure that I now consider essential. I was on a Joe blitzkrieg when I finally got the Headhunter. As soon as I got him, my purchasing dropped off considerably. There are few figures that have had that effect on my. The Ceremonial Luke Skywalker is the only other one that comes to mind. One I had the Headhunter, my collection was just fine. Sure, I'll add many more figures before the year is over, but this guy made 2000 a collecting success.

After his two releases in the US, the Headhunter mold was sent down to Brazil. There, he was released in colors similar to the 1993 American figure and was named Brutus. (These figures aren't too hard to find and are relatively cheap to acquire.) Usually, this means that the mold is in exile and that Hasbro will not be able to release a new Headhunter in the near future. However, something has recently happened that may offer some hope for fans of the Headhunter and the Headhunter Stormtrooper. Hasbro is going to release a new Clutch figure in 2004. What's notable, though, is that this figure uses the chest from Mace. Mace was also last seen in Brazil and was released contemporarily to the Headhunter! So, if Hasbro has Mace back in their stead, then it is possible that they may also have reacquired the Headhunter. Time will tell, but this does offer some hope for fans of this mold!

Sure enough, the Headhunter did return. In 2008, Master Collector found the mold and produced it in two different colors for their annual convention set. The first figure that was included in the box set is cast in arsenic and is different from the normal look of the Headhunter. The other, and more desirable figure, is the Headhunter Driver. This figure uses the same paint masks as the original Headhunter figures and has the same base, black body. This was only available as an attendee exclusive and has become one of the more expensive Joe figures in recent years. Unfortunately, the original Headhunter accessories did not reappear with the figure mold. As such, there is still a void in the collecting world regarding Headhunters. But, we at least know the mold is available once again.

Headhunters are a pain in the wazoo to find. Loose, that is. They are all over the place if you want a carded specimen. As these are very cool figures and don't appear all that often, prices on loose, complete Headhunters get a little high. You can usually buy a carded sample for only a dollar or so more than for what you could purchase a loose, complete specimen. Building an army of these guys is proving to be a challenge, but they are worth the search. Like most of the DEF figures, this guy wasn't produced in similar numbers to the other '92's. He is, though, far and away, the most popular DEF figure released. Many people who disdain the line love Headhunters. For that reason, finding him is all that much more difficult. I, though, was not disappointed in this figure like I have been many of the others over whom I have obsessed. The Headhunter is an excellent figure to add to your collection for just about any price.

I dig Headhunters and am always trading for or purchasing more. If you have some available, email me. 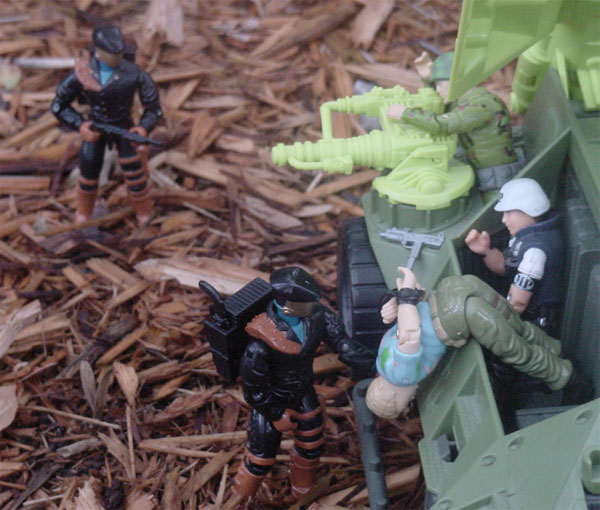 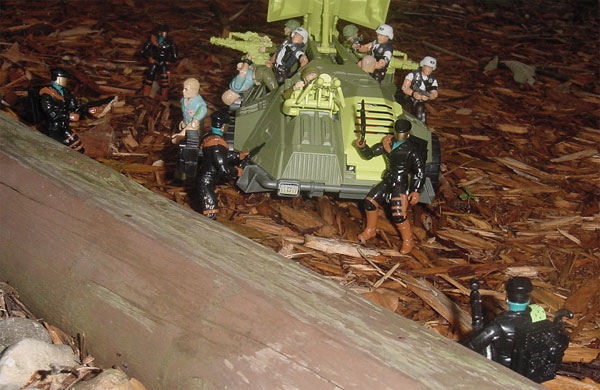 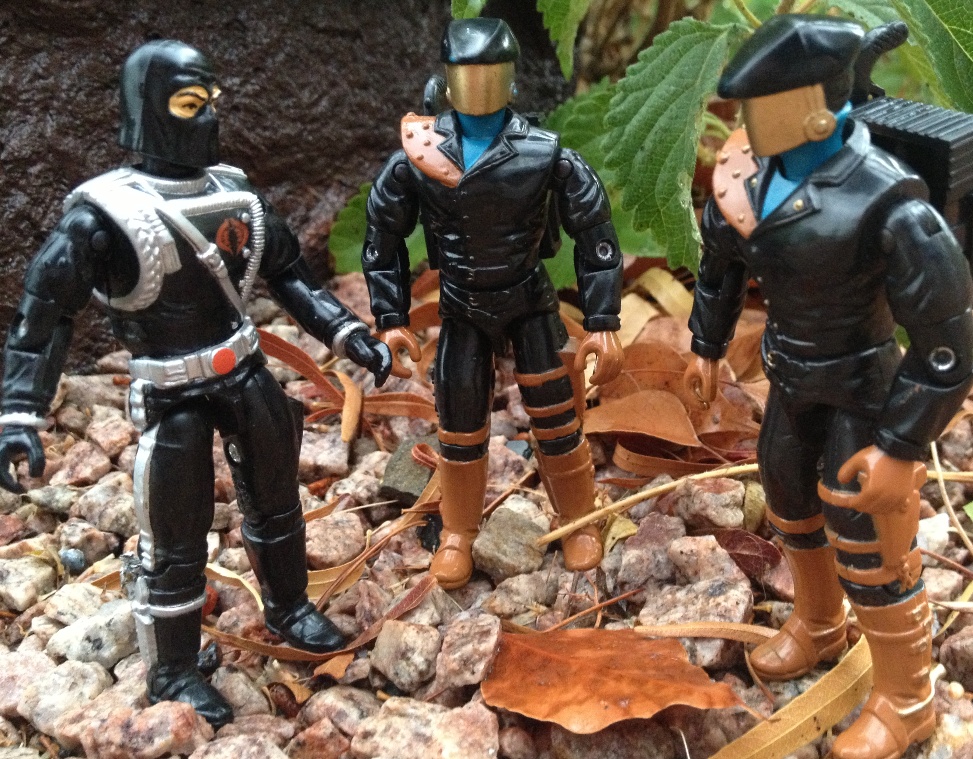 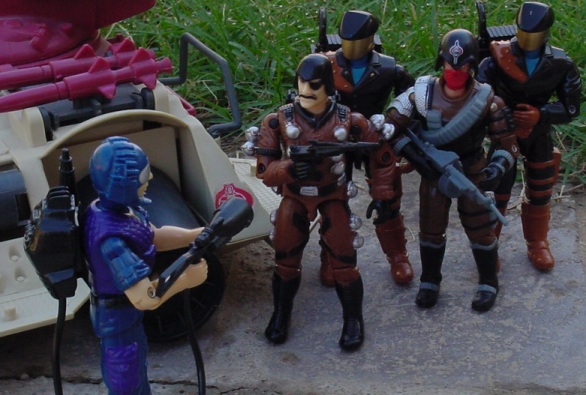 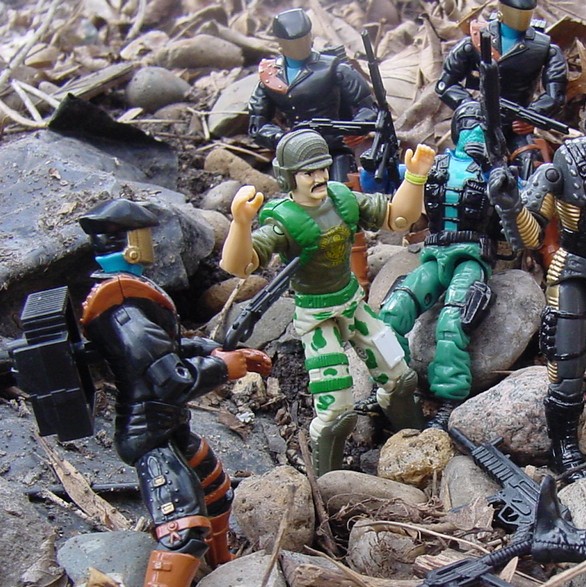 Posted by Robot_Sonic at 11:06 AM
Email ThisBlogThis!Share to TwitterShare to FacebookShare to Pinterest
Labels: 1992, DEF, Headhunter