Never had I so anticipated a new Joe year than in 1986. 1985 had been awesome and there was no reason in my mind why 1986 wouldn't follow suit. Fortunately, I was not disappointed. 1986, while not as powerful as 1985, was a great Joe year. At this time, I subscribed to the comic, had my own money to buy up all the figures I wanted, and was getting the grades to justify my parents taking me to toy stores on a routine basis. Needless to say, Joe was one of the primary things in my life. In late 1985, the comic was beginning one of it's greatest runs of storytelling. Cobra Island had just formed and new Joes and Cobras were getting introduced all over the place. One of my favorite covers in the entire run of the comic was issue number 47. It came out in either January or February of 1986 and featured the Devilfish (a great toy that's lots of fun to own!) with a crew of the new General Hawk, Wetsuit, and Beach Head.

For me, Beach Head ushered in the new crop of Joes. When a kid at school showed me a Dialtone he had found at a local Target, I bugged my parents for days until they finally took me. Of course, all the new Joes were gone. As we were walking out, though, my brother found a Dialtone on some random linen shelf. Needless to say, he got the new figure I was after. (I think this is the reason that I have 9 Dialtones today.) I ironed out that inequity, though, rather quickly. By the summer of '86, I was a Joe buying fool. (I seem to remember that 1986 was a particularly wet summer that allowed a kid who mowed lawns for a living, like me, to really clean up.) Beach Head was one of the figures of whom I had more than one. I loved his accessories and his parts made for excellent customs. I still have three or four custom figures that count Beach Head parts as an integral part of their makeup. He is a figure whose form is just awesome. He is a radical departure from figures I normally like. This guy is very busy. He has C-4 on his chest, a bomb, knife and pistol on his legs, and a pack full of good stuff. Unlike the other, bland figures I tend to find so enjoyable, Beach Head's molded gear hinted at him being much cooler than he really was. Had the grappling hook on his pack actually worked, this guy would have never been allowed out of my primary rotation.

I consider Beach Head forgotten only because I had stopped using him. I don't know what it was about him, but both he and Leatherneck disappeared from my play rotation rather quickly. In 1986 and 1987, I couldn't get enough of these two guys. They were a team. They both had great paint schemes and awesome accessories that were perfect for fighting the new Cobras. For some reason, though, I put these two away and have yet to really take them out. I recently purchased a new Beach Head as part of a lot. When I got him, I was reminded of why this figure was once so popular with me. He is a perfect commando, but also works in forest of jungle environments. His appearance in G.I. Joe #50 in the Special Missions introduction was enough to get me hooked. I think his lack of later appearances, though, are partially to blame for his fall from grace in my collection. Another reason I put this figure away, though, is that he is brittle. I know I had at least three Beach Heads. His accessories and parts kept breaking on me, though, so I think I tucked him away to prevent my final specimen from suffering a similar fate.

This Beach Head mold only saw 1 release in the US. He then appeared in India in the mid-90's. There, the figure was released in several color schemes: some more bizarre than others. The mold was constantly in and out of production in India for several years and saw one last production run in early 2003 right before Hasbro re-acquired the mold. Since then, this mold has been used for a convention exclusive figure as well as a retail release 6 pack figure.

Beach Head's aren't all that tough to find. He readily appears in all sorts of lots. However, he is usually found with great paint wear, a broken crotch, and missing or broken accessories. Finding a mint, complete specimen can take up more of your time than you wanted. For that reason, pristine Beach Heads will command a premium while figures with normal, run of the mill wear and tear will sell for nothing. He is a figure, though, well worth adding to your collection. He is one of the great unique figures from the mid '80's whose mold and form were never reused. As such, he really stands out in any collection. Be sure to check that his gun is a light grey. There is a dark grey version that came with an accessory pack that is very easy to mistake for his original gun. You also have to watch his ammo pack. Many of them have broken straps that are easy to place together in a scan or picture. (See what I mean about his accessories being brittle?) After you've got this guy, though, you will find all sorts of uses for him. He's a great figure you really don't hear enough about but should be an integral part of any collection. 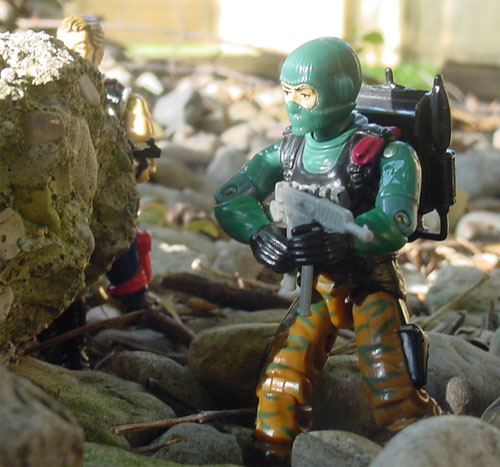 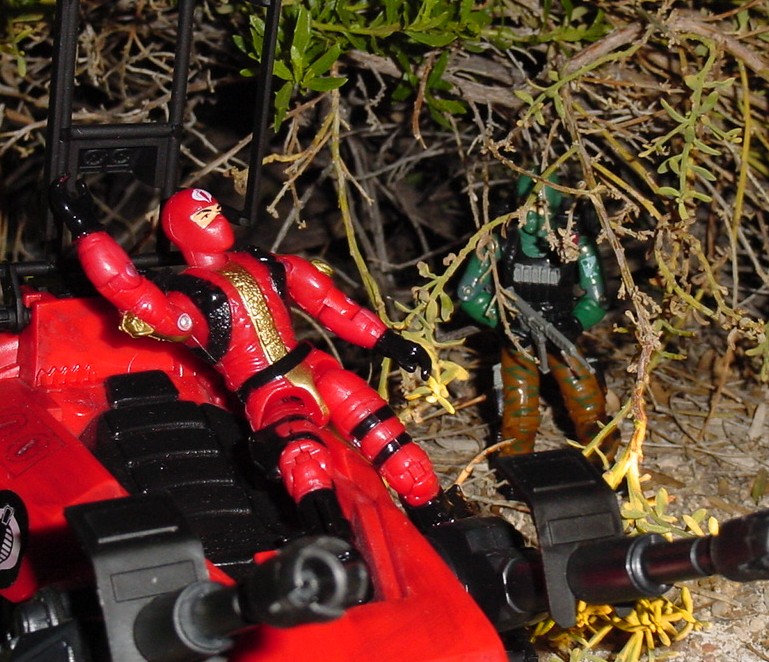 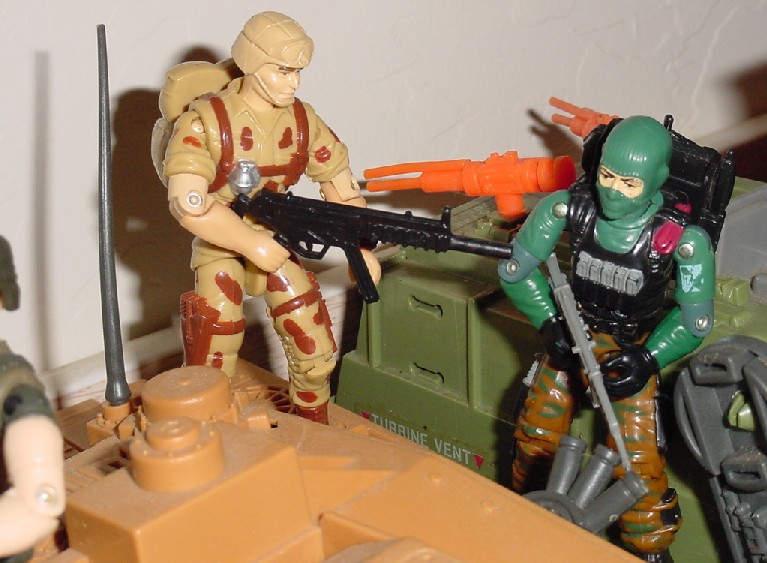 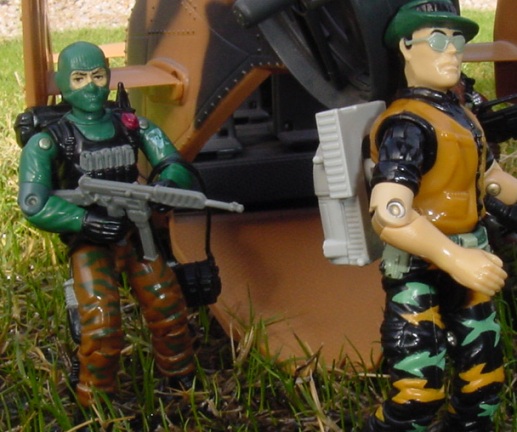 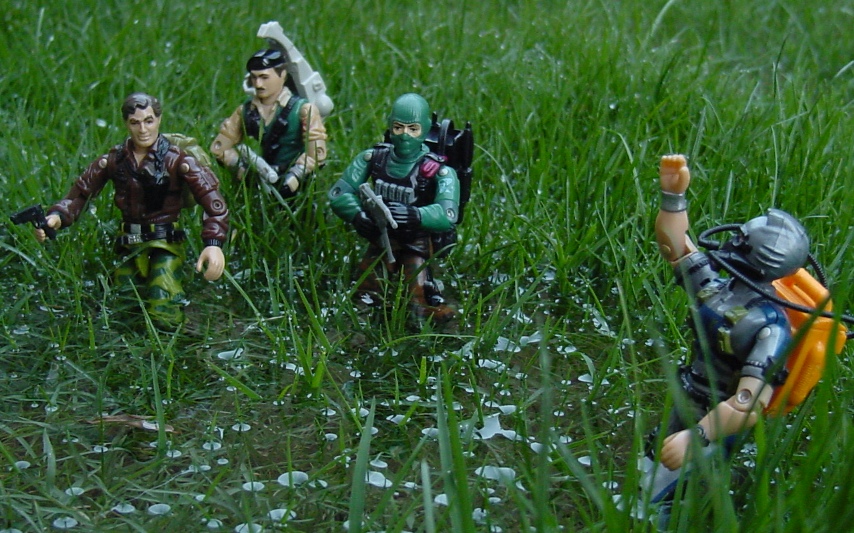 Posted by Robot_Sonic at 10:43 AM
Email ThisBlogThis!Share to TwitterShare to FacebookShare to Pinterest
Labels: 1986, Beach Head, Beachhead