Whether you like neon or not, 1994 had its fair share of good figures. We have already looked at Shipwreck and have spend a good amount of time talking about the Star Brigade. Dialtone, though, is another solid figure from the line's swan song year. He has a good mold which does not suffer from the '94 "big shoulder syndrome", striking color scheme, a cool helmet, and is a rehash of a character that I certainly wanted to see return to the line. Sure, this guy has some bright yellows and neon green, but it contrasts well with the dark blue body and creates an aesthetically pleasing figure. His yellow weapons are terrible, but black replacements can easily be found in your weapons reserves. (In consider Dialtone's gun to be one of the best in the line. I use it with all sorts of different figures. Both the original white version and some of the later black versions are awesome and work with both Joes and Cobras.) Once properly outfitted, this guy is fun in a combat setting, on the water, in the headquarters, or in just about any other environment in which you can put him.

The original 1986 Dialtone is one of my all time favorite figures. I use him as a security guard or young officer. The beret just emanates an official aura. As such, I've got about 10 of the originals. The Mission to Brazil version is also kind of in my collection. The figure was trapped in my garage door and had its foot broken off. I replaced the terrible red legs, though, with those from a spare '86 Hawk. The result is another awesome figure that I use as a new, young field Joe. I don't have the sonic fighter version, though it looks like it could be cool. This version, though, is another great figure to have. I primarily use him as a gunner aboard my Shark 9000. I also use him as a computer operator or communications officer in either the Joe Headquarters or aboard the Tactical Battle Platform. The sci fi look to him allows you to use him as a science officer or technician, but he also has a combat look about him. I've found all sorts of uses for him on many of my expeditions. A spare communications officer always comes in handy.

When I first returned to Joe collecting, one of the first lots I bought had this guy, a '93 Star Brigade Roadblock, and a '94 Lifeline. I was after '94 figures then, and I'm still after them today. I just really like many of molds and specialties they came out with that year. '93 gave us figures of primarily neon with some dark highlights. '94 brought us nicely colored figures with some neon highlights. I think Hasbro had figured out that neon was not the way to go. They were phasing it out in '94 and probably would have even more so had the line survived to '95. It is really a shame that the line ended with the '94's. It seems that the problems that had started in 1992 and exploded in 1993 were finally being reigned in and put under control. The line probably would have experienced a slight rebirth had it been allowed to survive and flourish under what would have been separate entities for Star Brigade and regular Joe. Kids would still have been able to get brightly colored, far out figures in the Star Brigade and Manimals lines while not neglecting their military appetite by being able to also get Battle Rangers figures. I guess all good things must come to an end, but 1994 proved that Joe was not going out without a fight.

On a very happy note, there is some news, though still speculative, that there might be some Joes returning to the shelves in late 2000. Dialtone is one of the 10 mentioned. The figure could be a repainted version 1, a new version 4, or an amalgamation that creates a whole new figure. Either way, that figure is the one to which I am most looking forward. In 1998, there was originally supposed to be a Dialtone packed as part of a 5 figure set that would have come with an updated 1983 G.I. Joe Headquarters. When the first rumours of what figures would see production in 1998 surfaced, I was ecstatic that Dialtone was going to be one of them, but I was disappointed that he was going to come with a high price point contraption like the headquarters that would preclude me from buying more than one. That disappointment was magnified a thousand fold when I learned the headquarters had been scrapped and there were no longer any plans to return Dialtone to retail shelves. Perhaps, the rumoured 2000 Dialtone will be the one originally slated for the 1998 release. In any case, I am excited about Joe again and can hardly wait to see what the end of the year brings.

1994 Dialtones are not hard to find. I've got three of them. I always make sure to get at least the helmet. The gun you see pictured is a nice add on, but not necessary. I primarily give this guy Psyche Out's gun. He looks great with it. Like most '94's, this guy will keep appearing for quite some time. He was readily available at retail almost into 1996. For that reason, though, there are still many carded samples out there. It may be easier to acquire a loose, mint, complete specimen by purchasing a carded figure and liberating him from his plastic dungeon. Since the carded figures are still cheap, now is the time to do it. I was fortunate enough to pick up my original Dialtone at retail, but I've since added two more. They are available, especially if you look for lots with '93 and '94 figures. This is another figure that once you have him, you will just start finding him all sorts of uses.

I've got a couple of these guys and am not in the market for any more right now. 1994 Star Brigade figures, though, are a different story. If you have some of those to sell or trade, email me 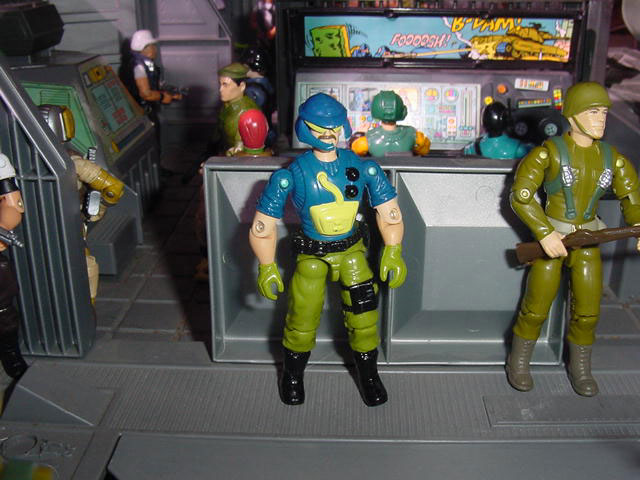