Stormshadow in no way fits the definition of a "Forgotten Figure". At worst this version of the classic Cobra Ninja is an iconic representation of the line as a whole. This figure is easily one of the five most important and popular molds released in the vintage line and remains one of the first figures most new collectors attempt to acquire.  So, why profile a figure of this stature?  The answer is that it's just a great mold and ignoring it for too long simply makes no sense.  Stormshadow is a figure that looms over the entire line and defines G.I. Joe for a generation of kids who grew up in the mid 1980's.  So, overlooking him leaves a chunk of my childhood unrepresented.

In 1984, Stormshadow was basically impossible to find at retail.  Modern collectors know the pain of not being able to find figures at retail.  While the distribution issues of today are much worse than those from the vintage days, there were still problems getting the most popular figures into kid's hands.  I saw the first 1984 catalog with a photo of the Stormshadow figure in the early spring.  I did not see a Stormshadow on the shelves of a toy store until October.  At that time, the one I found was on the top row of an endcap of Joe figures: much higher than the reach of a typical 10 year old.  I asked for an employee's help and had the first Stormshadow figure.  But, it would not be for me.  Being only days before my younger brother's birthday, I had to buy the figure for him.  But, at least we would have one in the house.  Other friends of mine had the same issues.  One went as far as to order the figure, along with 5 figures he already had, from the JC Penny catalog.  Desperate times called for desperate measures.

My brother, though, quickly lost most of Stormshadow's accessories and even broke his thumb.  The figure I had so desired for so long was basically destroyed in a matter of weeks.  Fortunately, as the calendar got closer to Christmas, stores were moving Joe figures in droves.  This meant Stormshadow was more available.  On my birthday in December, I received my own Stormshadow figure.  From that moment, I was careful with him even as he became one of the most important figures in my collection.  For the next several years, Stormshadow would undergo various evolutions.  He might be Cobra Commander's most trusted ally.  He could be a silent assassin hell bent on killing Joe commanders.  Or, he would be a Cobra for hire for any of the Cobra hierarchy who could afford his price.  It kept the figure useful in a variety of ways and prevented him from getting stale like many of the his contemporaries.  As late as 1987, Stormshadow was still a major player in my collection: a testament to his quality and character.

Several years ago, I looked at this mold's 1997 release. At the time, it seemed unfathomable that Hasbro would not release that iconic mold over and over again with his full complement of accessories.  But, that did not happen.  The 1997 figure remains the only release to also have the ninja's complete weapons.  As such, that places greater importance on the original release.  With many figure, Hasbro tried to upgrade the original look of the figure in the modern line.  With Stormshadow, they were not successful because of the lack of weapons.  Stormshadow's gear is a great part of what makes him so special as a figure and as a toy icon.  Without them, some of the mold's limitations come into play.  The early Joes were successful for three reasons: design, character and weapons.  Take any of these away and the figure suffers for it.

This, or course, has lead to a greater appreciation of this figure for me as time has marched on.  With so many missed chances to surpass or, at least, equal this figure in the modern line, collectors have little choice but to turn to the vintage for their Stormshadow fix.  Over the years, I have tracked down Stormshadow variants from Brazil and Argentina, just to expand my roster of Stormshadow figures.  He is one figure that meshes well with high ranking Cobras from any era of the line's history.  As such, I, like most collectors, have several version in my collection.  Stormshadow is just a figure of whom one is never enough.

The Stormshadow mold was quite the world traveler. After it was used in the US, it was sent on to Argentina. There, it was released in 3 color schemes: in red as Satan, in black as Ninja-Ku and in white as Cobra de Hielo. After those figures, the mold was sent on to Brazil where Storm Shadow was released in colors very similar to his American colors. After that, the mold was returned to Hasbro where it was used in the early '90's as the Ninja Viper mail away figure. When Joe returned in 1997, the Storm Shadow mold was restored to its fully accessorized glory in the 15th Anniversary 3 packs. After that, Hasbro got stingy with the mold and it was not seen again until 2004 when it was used for the Black Dragon Ninja and the Red Ninja Viper. It was used one final time in 2005 as Storm Shadow (only with different arms) in the comic pack with Snake Eyes and Destro. Frankly, this is a mold that needs a few more releases. The fact that this figure hasn't appeared in Cobra blue is a crime and remains one of the most gaping holes in the ARAH collection. Aside from that, it could be done in a few other colors (grey, green, etc.) as either Storm Shadow or as a faceless army builder. Given the proper accessories, just about any color scheme for this figure would be well received.

Stormshadow figures feature wild variations in prices. Most of them are based on subjective judgments about the figure's condition. A pristine white Storm Shadow with no paint wear on the emblem or black sash can easily fetch $70 or more. (This is down from $100 just a few years ago.) But, even slight flecks of paint wear can drop the price down into the $40 range. But, you will be hard pressed to get a complete with filecard Storm Shadow in C-8.5 or better condition for much under $40. But, the good news is that Storm Shadows are rather common. With a little patience, you can put together a nice figure and easily pick up a few spare sets of accessories to boot. Doing it cheaply, though, can be a challenge. For my money, this figure is simply an icon that no collection can even begin to be without. There is no version of Storm Shadow that has lived up to this one and none of the others so iconically capture the look and feel of the character. 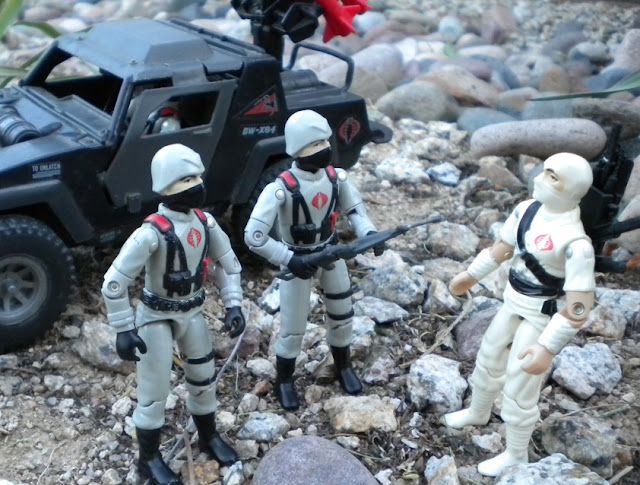 Posted by Robot_Sonic at 9:11 PM
Email ThisBlogThis!Share to TwitterShare to FacebookShare to Pinterest
Labels: 1984, Stormshadow