1987 was the last real year that I collected Joes in my childhood.  Sure, I bought a few 1988 figures.  But, that was done with after the first few months of the year.  1987 was the last time I tracked down every figure and attempted to get every vehicle.  As these were the last figures from my youth, I have fond memories of many of them.  While they didn't span multi-year play patterns like some earlier figures, they were the backbone of my final adventures.  For many collectors the 1987 series is special because of their attachment to the G.I. Joe movie or cartoon.  I, though, am overly sentimental about the '87's due to their unique place in my personal collecting chronology.

As a kid, the notion of a tunnel specialist was a great addition to the Joe team.  However, it is rather difficult to have actual play adventures in a real tunnel in the dirt.  So, Tunnel Rat was most often a hidden weapon who would emerge from a tunnel or underground cavern and assist the Joes.  The tunnel was a hook to get him into the action.  But, once the shooting started, he was, at his core, an infantryman more than a specialist.  As such, I have many memories of taking Tunnel Rat outside to play in the grass, dirt and weeds that were my Joe world in my backyard.  I dug holes for him from time to time.  But, mostly, he was used as a basic Joe.  Occasionally, I would outfit Tunnel Rat with the pistol from either the 1986 Hawk or the 1987 Backstop figure, give him Outback's flashlight and actually use him as a real tunnel rat.  I had read an issue of the 'Nam comic that featured a short story about a tunnel rat who actually bore some resemblance to this figure.  That inspired some solid adventures.  But, it was Tunnel Rat's appearance in the Special Missions comic where he was the team's designated light machine gunner that most inspired my use of the figure.

In this role, though, the figure found great use.  In short order, my figure exhibited playwear and I lost his flashlights and broke the handle on his gun.  This shouldn't be out of the ordinary for a child's toy.  But, I took great care of my Joes after 1986 and kept many of them in pristine condition.  For a figure that entered into my collection so late to take such abuse was a testament to the amount of use the figure saw.  But, the quality of the mold and excellent accessory complement were more than enough to keep the figure as an essential member of my Joe team.  Even when I returned to Joe collecting in the early 1990's, Tunnel Rat was a vital member of my collection.  While his original gun was long gone, I replaced it with the black version of Sub Zero's machine gun that was included with the Sgt. Savage Iron Panther tank.  It was a suitable replacement and kept the character viable until I was able to secure high quality, and complete, replacements.

As Rock and Roll had been long absent from my collection and the 1984 Roadblock's accessories had long been broken and I didn't like the 1986 Roadblock, Tunnel Rat became the main machine gunner for the Joe team.  In my backyard, there was a slight indentation on one side where the ground sloped down to a garden.  I had this as a road for my convoy of Cobra vehicles.  Naturally, the Joes lay in ambush with Tunnel Rat at the head: ready to pick off the multitudes of Cobras as they vacated their vehicles to take cover from the Joes on the high ground above the road.  I recall this outside adventure as it took several days in the fall to put together and the convoy was made of the combined collections of myself and the kids who lived down the street.  The idea of having 4 Hiss Tanks, 2 STUNs and 2 Maggots all together was simply amazing.  How would the Joes defeat such a large force?

The final day of the battle was ended when a rain storm sent us all inside, leaving the Joes out in the elements for several days as we waited for the rain to leave.  When it did, though, we had moved on to new adventures.  Eventually, I picked up the toys from the yard and brought them in.  It was the last time I would play with Joes with my friends.  As 1987 wound down, sports and other pursuits were starting to take our time.  I moved the toys inside and into my bedroom.  From there, I would have some great final adventures using the major players from 1987.  But, that last battle with Tunnel Rat at the head of the attack is something that I'll never forget.  The following spring, the kids from down the block were over and we were playing soccer in the backyard.  The ball went out of bounds into the garden by the convoy attack spot.  When I got the ball out, I found an Armadillo manned by Heavy Metal that had ridden out the winter hidden in the ivy.  I pulled it out and we all recalled when we had put it there to attack the Cobras.  We had a laugh, I took the tank inside and we played out our game, giving the toy little thought.

Tunnel Rat's accessories are both awesome and ridiculous.  His huge backpack is well detailed and would be great for a long range infantry trooper for survivalist.  The flashlights that plug into the top of the pack and are removable are a stroke of genius and a great addition to the figure.  The explosive satchel is a great add on for the figure and follows the EOD roots of the character.  The light machine gun is large, but not unwieldy.  It is well detailed and a perfect fit for a light machine gunner.  The ridiculous part of this, though, is that the figure is named Tunnel Rat.  In a tight tunnel or crawlspace, a weapon the size of Tunnel Rat's would be impossible to maneuver.  The huge pack would get stuck and impede his movement.  So, for a light infantry/machine gunner, the accessories are great.  But, for someone who crawls through cramped, dark spaces, the size of the gear is non-sensical.

The Tunnel Rat mold has seen a good amount of use.  Hasbro released the figure in 1987, in Night Force colors in 1988 and as part of the Super Sonic Fighters line in 1990.  Around 1991, Hasbro also used the mold for the European exclusive Tiger Force Tunnel Rat.  From there, the mold went to India.  There, Funskool released a Tunnel Rat figure that was similar in color to the Sonic Fighters version for many years.  Tunnel Rat was one of the first 18 molds Funskool returned to Hasbro in 2003.  Hasbro quickly used the mold in the 2004 Night Force set, the 2004 Desert Patrol set and a comic pack (but with a new head) in 2005.  The mold hasn't been seen since then.  But, considering the amount of use it got in a short time, most collectors are content with the amount of Tunnel Rat figures available to them.

In the early 2000's, Tunnel Rat figures were very popular.  So much so that mint and complete versions sold for $20 or more.  Slowly, though, the demand for the figure sated as collectors were able to either acquire the figure or pick up a modern repaint.  Still, though, many people think that the figure is worth the $20 price tag.  If you are selling a mint, complete with filecard version, you can get that amount without too much trouble.  But, if you are buying, a little patience shows that the same figure can be purchased for around $10.  At $10, this figure is a must have for every collector.  It's a popular figure, vintage mold, and solid character.  You can't ask for much more than that for such a cheap price. 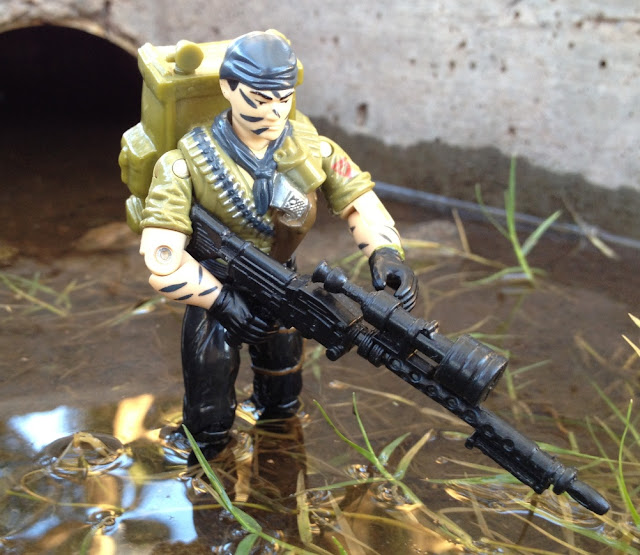 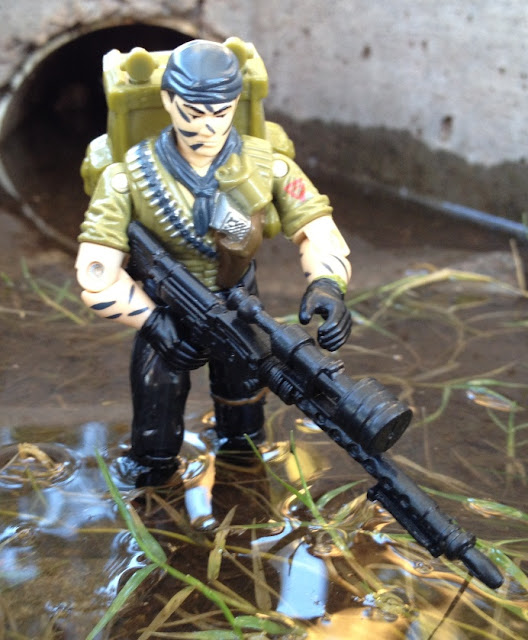 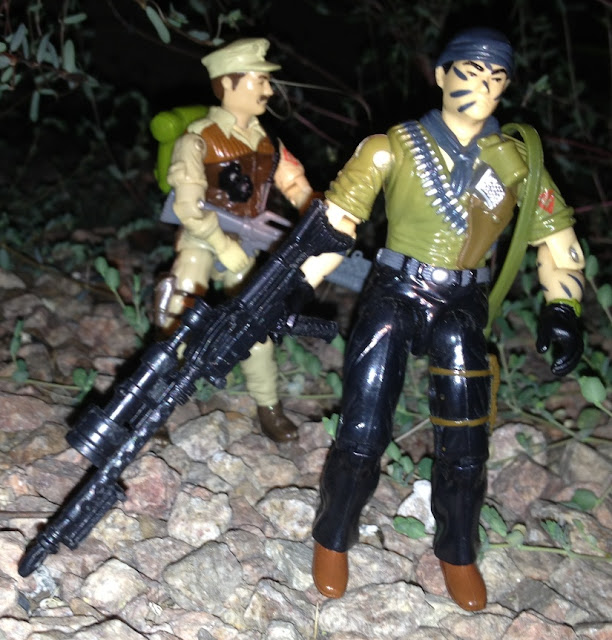 Posted by Robot_Sonic at 9:29 AM
Email ThisBlogThis!Share to TwitterShare to FacebookShare to Pinterest
Labels: 1987, Tunnel Rat