In 1990, I was not buying G.I. Joe toys.  I was, though, buying the comic.  There, the SAW Viper was the ultimate Cobra villain: the first Cobra to score major Joe casualties.  The entire story arc built around him made the character larger than life.  I only imagined how cool the SAW Viper figure would have to be after seeing his run in the comic.  In the fall of 1992, I saw a lone SAW Viper sitting on the shelves of a K-Mart in a small town in Ohio.  I wasn't buying Joes at the time and didn't spend any time looking at it since it was my first weekend in college, so I left it there.  But at least I knew the figure existed.  It was many more years, though,  before I acquired my first SAW Viper.  Disappointment is too nice a word for what I felt when I held the paltry design in my hand.  The figure in no way lived up to the character from the comics.

As a figure, the SAW viper is small.  He does not give off the vibe of size like you see with the Flak Viper from just 2 years later.  Instead, the mold makes the figure seem slight.  This is in direct contrast to the hulking behemoth that was the comic SAW Viper.  It is also in contrast to someone who would carry such a large weapon into combat.  But, when you have visions of a gargantuan man donning the SAW Viper uniform, the figure is extremely disappointing.  It is thin, short and feels weak to the eyes.  In all fairness, part of this is due to the disparity between the comic character the molded toy.  But, it is the defining feature of the figure and makes him feel less imposing than he should be.

The mold itself, though, is well detailed.  The figure features a molded communications microphone on his head that is often missed over the chin strap.  The helmet is definitely a Cobra design: slightly futuristic, but still decent looking.  The single green visor works well for eye protection and does give the figure the sense that the human is shielded to some degree from his weapon.  The rest of the mold is rather non-descript.  It is covered in body armor.  But, the slight size of the figure makes this less imposing than it should be.  The legs and arms don't feature many details.  The real shame of the mold, though, is the purple color.  Cobra had an ever evolving color palette in the vintage line.  It began with blue, added crimson and then blended them together in various hues.  In 1987, though, the first purple Cobra appeared when the Techno Viper graced the shelves.  After that, Hasbro decided they liked that color and added it as one of the core colors of the Cobra army.  So, the SAW Viper joined the Techno and Toxo vipers as Cobras with the base purple color.  Really, it's not terrible.  The colors blend well together and don't seem overly out of place on the body mold.  But, purple is difficult to match up with an army of Cobra Troopers, Vipers, Crimson Guardsmen and BATs.  So, the SAW Viper finds himself on the outside of the Cobra infantry ranks.  Which is too bad as he would have been a great complement to a division of AK-47 toting Cobra Troopers.

The SAW Viper is actually well accessorized.  He includes a backpack, ammo belt and bi-pod that fits onto his machine gun.  But, what a machine gun it is!  The SAW Viper's weapon is as tall as the figure.  It is huge and unwieldy.  The bi pod that fits onto the bottom of the gun barrel isn't taller than the weapon's handle.  So, even with the bi pod, the gun can not be balanced unless the bi pod is set on another mount to exceed the height of the grip.  This large handle has broken many a SAW Viper figure's thumb.  But, the overall size just makes the figure ridiculous.  Were this figure given Rock and Roll's M-60 or some of the machine guns from the modern era, I think he would have been somewhat redeemed.  But, the large weapon makes it hard to take the figure seriously.  It is just too out of proportion to the figure mold to make any sense.

From 1989 through 1992, my only real connection to Joe was the comic book.  I was not buying the toys.  But, every month, I would ride my bike over to the Broad Ripple Comic Carnival and buy the new Joe book.  My connection to the characters introduced in those years was solely based on Larry Hama's presentation of them.  I did not have the toy versions of any of the characters and really had no interest in buying the figures at that time.  But, the comic kept me into the Joe world and held the connection to my childhood interests.  It bridged the gap years between my childhood playing and my adult collecting.  The stories from those years were well told and made me want to buy Joes again as I got older.  The comic arc with the SAW Viper was a big part of that.  I couldn't wait to see who would die in the next issue and was incensed when Doc was killed.

In my collection, the SAW Viper could never overcome his initial bad impression.  While I wanted to find a use for the figure, I just never did.  After I acquired my first version, the figure became something I was no longer interested in.  So, adding multiples to my collection was never important.  In looking through more than a decade's worth of photos from my various sites, I only see the SAW Viper in rare instances.  The figure just never found a way to capture my attention and become a valuable part of my Cobra army.  This continues today.  Had the SAW Viper been released in 1991 or 1992, it is likely he would not have made the cut to stay a part of my collection.  I have a complete set of 1990 Joes, though, so I keep him as part of the set.  But, beyond that, he really doesn't have a place in my collection.

The SAW Viper mold has been rather underutilized.  After its use in 1990 and 1991, the mold was not seen for a decade until the entire body was used to create the truly awful 2001 Zartan figure.  In 2003, Hasbro gave collectors the full SAW Viper as a member of the Toys R Us exclusive Python Patrol set.  Unfortunately, the SAW Viper was the only figure in the set to feature an alternate paint application.  In lieu of the Python Patrol pattern, the SAW Viper was a bright, ostentatious red.  Frankly, it was a horrible figure.  The mold was then never used again.  Really, it made no sense.  The SAW Viper was a natural fit for the Cobra Urban Strike set and would have been a great replacement for one of the named characters.  In Cobra Blue, the SAW Viper would likely be a nice figure that could be useful.  But, collectors never had the chance to get a decent repaint of the figure.

SAW Vipers are fairly easy to find and rather inexpensive...if they are incomplete.  Complete with filecard versions, though, tend to sell anywhere from $12-$18 on a consistent basis.  The bipod and ammo strip tend to be more difficult to find and they raise the price of mint figures.  SAW Vipers are the type of army builder where most collectors are satisfied with just a few samples in their collection.  The mold isn't that popular and doesn't really fit with any decent Cobra vehicles.  So, they are hard to display.  Of course, this means that, if you want one, SAW Vipers are easy to acquire.  Even with the small bi-pod and ammo belt, finding them complete is simple.  This isn't a bad thing.  It's just that the figure is a bad thing and that will likely doom him to an eternity of collector malaise. 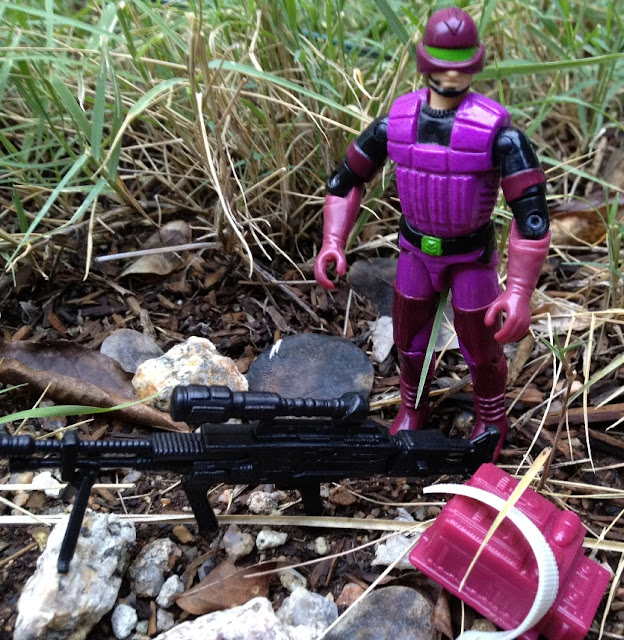 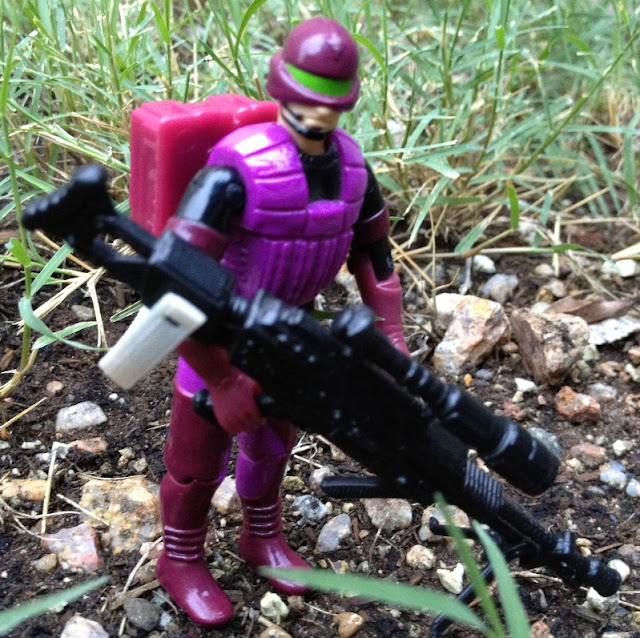 Posted by Robot_Sonic at 9:29 AM
Email ThisBlogThis!Share to TwitterShare to FacebookShare to Pinterest
Labels: 1990, SAW Viper