Ace is an iconic character in Joe lore.  His original figure is one of the most distinctive looks from the line's original years.  He featured a futuristic design that was integrated with his Skystriker's colors.  It was a nearly perfect blend of figure and vehicle.  However, as the line progressed, the pilot figures did not substantially improve.  Slipstream, Ghostrider, Dogfight and Windmill were all poor figures in comparison to Ace in terms of looking like pilots.  In 1992, however, Hasbro created a new design for Ace that had the look of a more traditional fighter pilot.  Unfortunately, the figure was colored more like a Cobra than a Joe since he was all blue.  In 1993, though, Hasbro repainted the figure in a olive drab color scheme that gave collectors a figure that I find to be the definitive pilot of the vintage line.

By and large, this Ace still has faults.  Many of the details on the mold are unpainted.  The flight suit appears to be overly bland except for the black band and gold highlights.  The figure definitely suffers from the lack of paint applications that plagued the line's final years.  But, the overall package still works quite well.  The mold is incredibly detailed, but not too bulky.  Ace's neck is painted red and that adds a splash of color to the figure that brings some needed depth without overwhelming the figure.  The helmet and mask are a great accessory combo.  The helmet even features gold paint on the goggles for a more solid design.  The fact that they plug into the flight suit only adds to this figure's overall quality.  You have a completely self contained pilot that features flight gear that at least borders on normal.  The figure also includes the "Low Light" uzi that first appeared in 1986.  I always liked it when pilots included pistols.  I don't really know why, but it adds dimension of danger to them and allows you to use them as more than just a figure sitting in the cockpit of a jet.

As a character, though, I can only use the V1 figure as Ace.  That is the iconic look for Ace and, to me, is the only look I can envision as the character.  But, this figure is simply too good not to use in some capacity.  As such, I see this figure either as an updated Slipstream or Ghostrider rather than Ace.  I have also used this figure as a generic pilot in certain cases.  So, I find use for the figure: just not as Ace.  The main problem I have, though, is that while this figure looks great in the Dragonfly, his mold is a bit larger than the early figures and it does not fit.  He is a perfect match for the Razor Blade helipcopter.  But, the larger size does somewhat limit this figure's use in early vehicles.

This Ace mold got its share of use.  After the vintage figures in 1992 and 1993, the mold was used again in 1997 in the Toys R Us exclusive figure offerings.  The body was resurrected in 2003 and used for the Slipstream figure included with the Conquest.  (This figure, those featured a new head.)  It has yet to appear after that.  However, when you consider that both this and the 1992 figure are fairly good and that the 2003 figure gives a body color that creates another look for Ace, this mold is probably played out.  I would love to see a new take someday that really uses paint applications to show off the mold's details.  But, I don't think that will ever happen at this point.

This Ace is hard to find.  Unlike Cutter, Nitro Viper and Windchill, this Ace was never available as an overstock figure.  (The 1992 Ace figures, though, were widely distributed as overstock and were even available from Hasbro Canada until 1999.)  The only way to get Ace was with the Ghostriker X-16 jet.  As such, this figure isn't the easiest to track down.  But, for whatever reason, collectors have never warmed up to this version of the character.  As such, a mint and complete with filecard version of Ace will run between $12-$15 even to this day.  Considering the figure's scarcity and his overall quality, that's a pretty good deal. 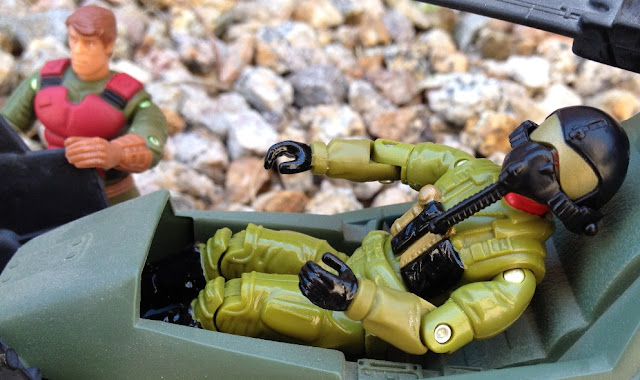 Posted by Robot_Sonic at 9:28 AM
Email ThisBlogThis!Share to TwitterShare to FacebookShare to Pinterest
Labels: 1993, Ace, Vehicle Drivers