If you follow the look of the figures in the Joe line by year, you see a progression.  What started as a base military line in 1982 slowly evolved into something much more diverse.  1983 saw the addition of color and more character to baseline military specialties.  1984 upped the ante from 1983 as well as introduced a sci fi element with Zartan.  1985 added more color and a more diverse group of Joes, while diving into more obscure military occupations.  1986 introduced even brighter colors and more science fiction inspired designs.  1987 was a mix.  There were some solid military infused figures.  But, the Cobras were about as out there as any year in the line.  One Cobra exception was the Techno Viper.  This army builder was a solid addition to the Cobra ranks and helped keep the 1987 Cobras from being completely terrible.

The Techno Viper is a decent mold brought to life with a new addition to the Cobra color palette: purple.  While the Techno Viper was really the first Cobra to use the color, subsequent years brought almost as many purple Cobras as there were standard blue and red Cobras.  For the mold, the color works as the purple is darker, muted and not ostentatious like it was on many later figures.  For the mold itself, it is strong, though a little odd.  The body showcases some semblance of armor with enough trappings to know this is a technical support trooper.  It is the head, though, that is the topic of most of the concern around the Techno Viper.  It seems like an homage to the Black Hole more than a Cobra Trooper.  The silver and black around the eyes blend into a confusing mesh of protective gear or intimidating visage.  The result is a head that isn't perfect and is probably the weakest part of the figure.  But, the rest of the mold lives up to the figure's specialty.

As far as accessories go, the Techno Viper's are top notch.  The backpack took playability to a whole new level.  The pack was designed to hold three of the four tools (2 different wrenches, a hammer and his weapon) the Techno Viper could need.  All these items attached via hoses to two molded tanks on the bottom of the pack.  The result is something that is very useful, playable and detailed.  It showed that Hasbro was still upping the ante on figure accessories with each coming year.  The combination of silver tools and the black pack just made the items more realistic since they didn't all blend together in one sea of black.

I basically have one, specific memory of the Techno Viper.  It was from the day my brother first acquired one.  As I got my first Outback the same day, I have forever linked the two together.  But, the Techno Viper really speaks to a larger guiding vision with my collection.  I have always liked what's new.  As a kid, I had a few favorite figures.  But, as soon as new Joes came out, those older figures were dropped in priority and the newest figures I owned were always the most used.  As an adult collector, I find the same thing applies.  The figures in which I have the most interest are the ones that are most recently acquired.  The problem with this is that as my collection nears completion, there are fewer and fewer new acquisitions available.  So, as the amount of available new product diminishes, so does my interest in the hobby.

I have solved this problem, though, by being able to re-acquire vintage figures who I haven't used in a long time.  I have not acquired a new Techno Viper in over a decade.  So, when I found a bag with several in it, the figure had some sense of newness to it.  So, the Techno Viper came back out for a bit.  This renaissance didn't last as long as it would with a new figure to my collection.  But, it shows that the vastness of the Joe line allows what was old to become new again at some point.

The Techno Viper mold appeared twice: this 1987 figure and a 1994 Star Brigade repaint.  The mold disappeared from there.  He was not released anywhere else in the world and never appeared in the repaint era.  (Which is odd as his Star Brigade contemporary Gears did appear as a new Barricade figure in 2004.)  The Techno Viper is a mold that could have been a great addition to the repaint era.  Offered with a black base or in just basic Cobra blue, collectors would have army built the figure en masse.

Techno Vipers are not expensive.  Even with the multitude of accessories, easily worn silver paint and popular release year, the figure has not caught on with collectors to the degree that other, more combat specific army builders have.  The Cobra support type Vipers are the type of figures of which collectors acquire a few, but not dozens or hundreds.  But, this leaves the Techno Viper as an affordable acquisition for the modern collector.  I find that my Cobra army would not be complete without them as they fill an important function.  On top of that, the figure is well done enough that it deserves to call every collection home.  Similar to Joes like Alpine, Barbecue or Iceberg, the supporting role of the Techno Viper prevents him from being the backbone of a Cobra collection.  But, without one, you are missing a vital operation that would be missed. 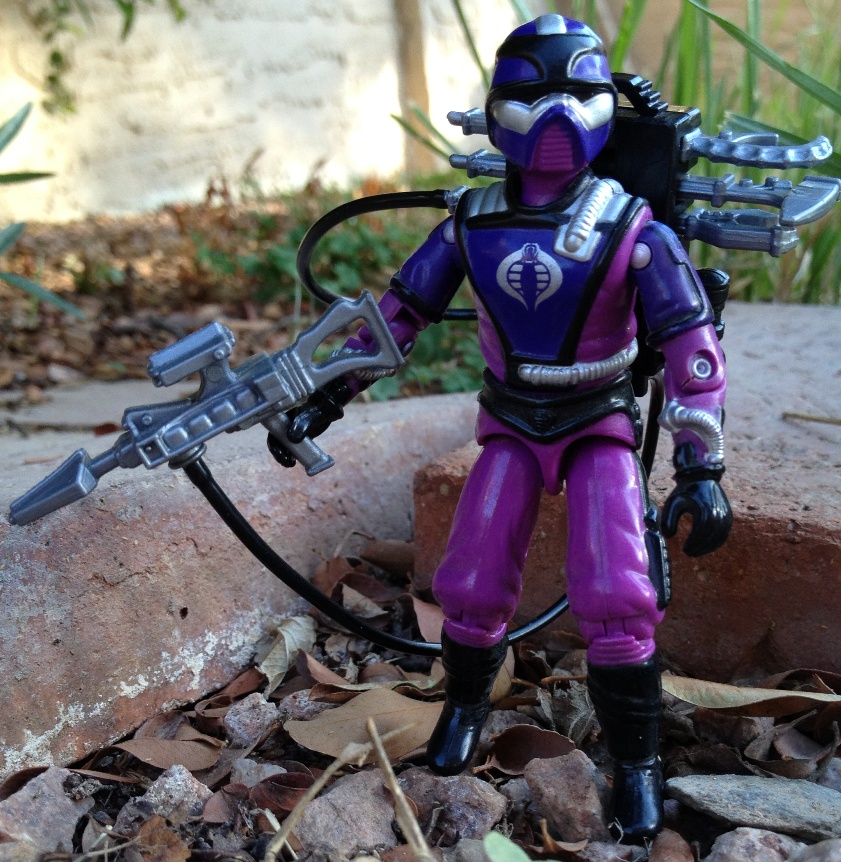 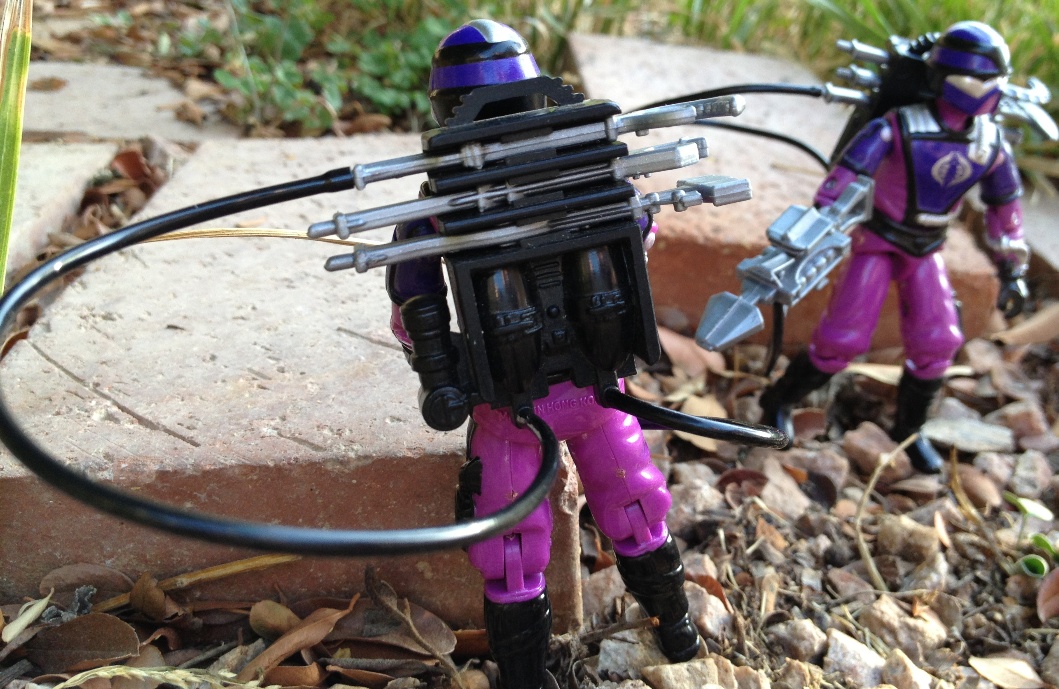 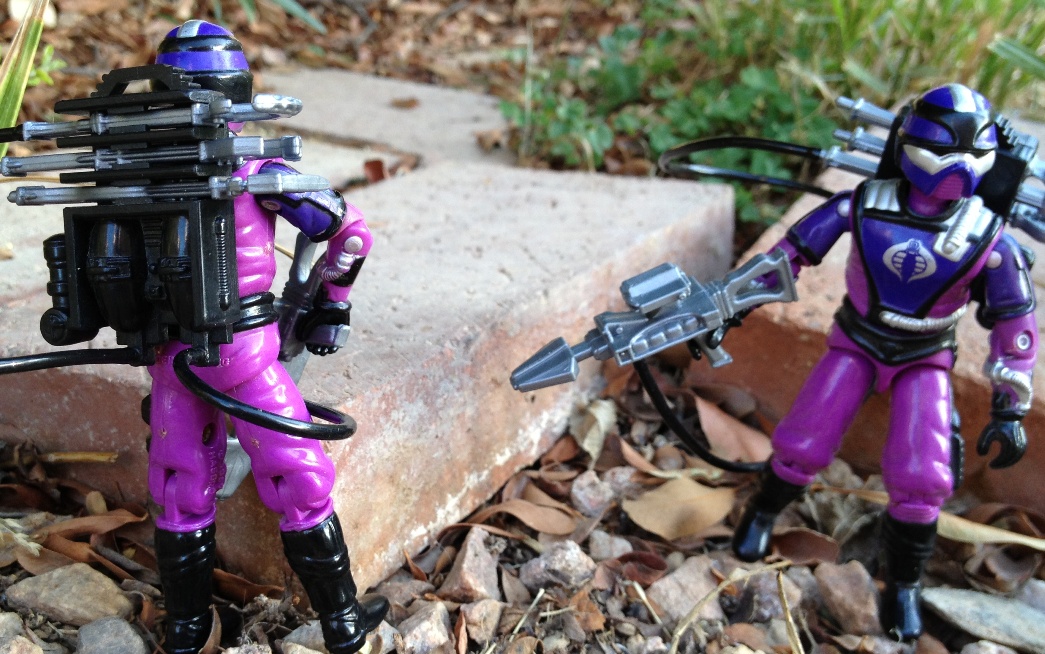 Posted by Robot_Sonic at 9:29 AM
Email ThisBlogThis!Share to TwitterShare to FacebookShare to Pinterest
Labels: 1987, Techno Viper