At the 2003 G.I. Joe convention, Hasbro gave collectors a collective heart attack at their booth.  Aside from the early samples of the figures upcoming in the regular retail line, Hasbro also showcased their planned army building sets that would round out late 2003 and early 2004.  Collectors were agape at newly constructed Crimson Guards, Cobra Troopers and Cobra Officers.  There was no limit to the excitement as banners thanking Hasbro were created in the zeal of them finally listening to what collectors wanted.  One of the upcoming sets was the Cobra Island Infiltrate set.

The premise was that three Joes dressed as Crimson Guards were going to infiltrate Cobra Island.  The set included the infiltration raft and three figures: Gung Ho, Duke and Snake Eyes.  The selling point, of course, was that each figure included a removable helmet that would allow collectors to simply buy the sets en masse and use the figures as helmeted Crimson Guard army builders.  (The early set showed a Thunder head, but the test shots of the actual figures later included the Duke head.)  The catch, though, was that the figures would not be sold at mass retail.  They would, instead, go to a designation of retailers known as "Market 6".  This meant that Wal Mart, Target and Toys R Us would not stock the set.  In their stead, non traditional retailers such as Walgreens and smaller, regional retailers would have access to the product.  This also meant that online G.I. Joe sellers would also be able to offer the product and sell it.  Joe dealers having access to the set quickly ignited the dealer world and most quickly put up pre-orders for the set and began to collect money in anticipation of coming sales.

Lost in all this enthusiasm for the new army builders, though, were a couple of troubling signs.  First, the BAT pack from earlier in 2003 had been a retail dud.  They didn't sell like Hasbro was hoping and Hasbro ended up having to clearance them out discount and overstock retail stores.  Even online Joe dealers, who were dialed in to the online army building community were sitting on thousands of unsold BAT 6 figure sets.  Simultaneously, Toys R Us was reducing their orders on the 6 figure packs from 25,000 units to 20,000 units after Tiger Force and Python Patrol sold somewhat slowly.  On the flipside, Joes were flying off of retail shelves and Hasbro could not keep up with the demand for Waves 7.5 (the army builder wave) and Wave 8.  So, there were mixed signals.

As 2003 wound to a close, collectors began to grumble about the timing of the Cobra Island Infiltrate set.  It wasn't showing up, even while all of the other toys shown for release in the same time frame were.  Collectors got worried that it would come out over Christmas and they wouldn't have enough money to buy all they wanted.  Still, though, there was no word on the set.  Then, quietly, Hasbro cancelled the set.  Dealers got notice and communicated to their customers and the collecting world in general.  Collectors were extremely disappointed.  But, the coming waves of army builders in early 2004 quickly diverted attention away from the Infiltrate set's cancellation.

The aftermath of this set's cancellation hit on a few levels.  For most collectors, the failure of this set to garner any retail support was the first real sign that the G.I. Joe renaissance of the early 2000's was far more fragile than they believed.  Within a year of this set's failure acknowledgement, the Joe line was cancelled.  The other reality is that this set bankrupted several online G.I. Joe dealers.  In some ways, this was bad.  But, it had some good side effects.

A few dealers had pre-charged people and collected money on this set.  They used that money for the $10,000 retainer with Hasbro to secure their order.  However, Hasbro had the right to keep that money and allocate it for other merchandise if specific items were cancelled.  So, when the set was cancelled, the dealers did not get their money back from Hasbro, but they had to refund it to their customers.  For most of the dealers who were part timers, this was too much of a financial burden and they went bankrupt.  A few managed to work out credits with their customers.  But, the items that collectors most desired were not available to these small sellers and the whole situation left the selling world smaller.

This wasn't a terrible thing, though.  From the ashes rose stronger and larger dealers.  While they weren't Joe specific, they had the financial wherewithal to weather blips like the Infiltrate set.  Also gone are the days where you pre-order something and pay up front.  That's good for consumers and creates a healthier market.  So, that is a positive legacy for this set.

At the time, not getting this set at retail seemed like a huge missed opportunity for collectors.  While Agent Faces was around to get some cheap Crimson Guards, this set would have been a quick hit for many of the deepest pocketed collectors to quickly build large armies.  But, in late 2004, Hasbro released the Operation Crimson Sabotage set that gave collectors three legit army builders.  That was followed in early 2005 with a Toys R Us exclusive Crimson Guard set that featured 4 Crimson Guards.  So, collectors ended up with many, better ways to get modern Crimson Guards into their collections.

This set made it very far into the production process.  But, not as far as some other abandoned concepts.  Full body, unpainted figures exist for Gung Ho, Duke and Snake Eyes.  So, Hasbro had the molds ready to go.  But, there are no factory painted examples out there.  So, it's unlikely they made it to a pre-production run.  (The samples below are hand painted proto types and kitbashes.)  Hasbro made packaging mock ups to showcase to prospective buyers.  So, they committed some decent resources to this set and fully expected it to take off.  Had this set happened today, it's likely that an online dealer or two would have been able to bankroll the run and get an exclusive.  But, in 2003, dealers didn't yet have that wherewithal and Hasbro still didn't believe in giving low production run items to non traditional retailers.

When taken against the later releases, the value of this set greatly diminishes.  Agent Faces was a cool novelty to have a Joe in Cobra disguise.  But, getting a bunch of Joes in Cobra uniforms seemed like a lazy headswap...especially since the Duke and Gung Ho heads had recently been used.  The real loss was the V1 inspired Snake Eyes head with a ball joint.  Hasbro got this head to pre production level.  But, it was never used.  It could have been used to create an awesome amalgamated figure using some of the swivel arm Snake Eyes bodies that Hasbro had in the 2000's.  This is another of those baffling choices that Hasbro made during that time.  Collectors were given Snake Eyes figures to death.  Yet, Hasbro had something new that actually would have pleased said collectors available, but then chose to not use it.  It's just odd.

At a proposed retail price of 9.99, this set would have been a huge bargain.  (Though, it's likely that no store would have actually charged that low since these were non traditional toy retailers.)  Three figures and a raft would have been a good deal even at a marked up price.  But, considering the releases that Hasbro did give to retailers in the subsequent years, collectors aren't really missing anything from this set's cancellation.  Sure, more figures are better than fewer and I would have loved a few extra Snake Eyes heads.  But, that's about the extent of the set's value.  It is certainly an interesting look into what could have been.  But, collectors didn't really lose anything too unique or interesting by not seeing this set released to retail. 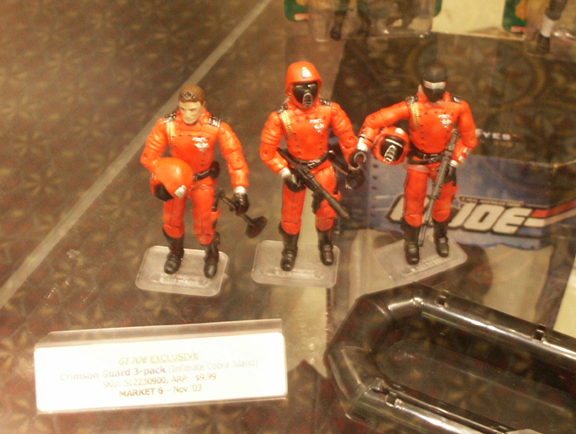